The lifetime ban on blood donations by men who have sex with men is expected to be lifted in the UK. 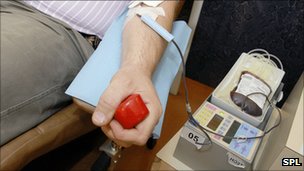 The restrictions were put in place in the 1980s to prevent the risk of HIV contamination.

However, the latest medical evidence presented to a government panel argued that such a ban could no longer be justified.

Several countries have relaxed the rules, basing them on the time since the last homosexual encounter.

The National Blood Service screens all donations for HIV and other infections. However, there is a "window period" after infection during which it is impossible to detect the virus.

In the UK, a lifetime ban was introduced in the early 1980s as a response to the Aids epidemic and the lack of adequate HIV tests.

Most new HIV infections acquired in the UK are from men who have sex with men.

Other at-risk groups, such as people who have been sexually active in high-risk countries, are banned from donating for a year.

The lifetime ban has been questioned both on equality and medical grounds, in the light of developments such as improved blood screening tests which have reduced the size of the "window period" and reduced the risk of contamination.

South Africa has introduced a six-month gap between sex and donation. It is a year in Australia, Sweden and Japan.

Research published at the end of last year suggested there was no significant increase in the risk of HIV infection after the change in the rules in Australia.

The UK government's Advisory Committee on the Safety of Blood, Tissues and Organs has been reviewing policy.

Earlier in the year the Royal College of Nursing voted overwhelmingly in favour of lifting the ban.

The Terrence Higgins Trust, the UK's largest HIV and sexual health charity, says the arguments must be about public health, not discrimination.

It states: "We believe any decision on the safety of the blood supply must be based on evidence and not on political lobbying or framing of it as purely an equalities issue."

wow I didn't even know such a ban exists, good news for the public.

WOW, sure took them long enough.

Well it's not really a case of discrimination here, the science actually supported this ban for a while and still supports a ban for a year after gay sex. HIV in blood is very much a worry.

Aren't they supposed to test the blood anyways? Honestly, this seems like racial profiling, only even more stupid.

They do test the blood. If you read the OP you'd see that there is a period of time after catching HIV that it cannot be detected in the blood.

And taking blood from a straight person and saying 'oh, this person's straight and AIDS is a gay disease, so I'm sure we can use it with no worries' is such a good ideea. This is just another case of demeaning gay people.

AIDs is much much more prevalent amongst men who have sex with men in the developed world. That is simple fact. To not use that information simply because some people see it as discriminatory would risk infecting people with HIV.

Dont try to use reason, statistics and facts with people that moralise.

I think that situation is more specific to the US than other places.