Forums - Gaming Discussion - How Powerful is the NGP? Comparison

After years of anticipation the PSP2 – we mean, the NGP – hasfinally been revealed to the public, and it is easily one of the most powerful mobile products ever made. Packing a quad core CPU, as well as a dedicated quad core GPU, the NGP is capable of delivering PlayStation 3-quality graphics in mobile form. But just how powerful is it compared to Nintendo 3DS, previous Sony handhelds, and Apple's iPad and iPhone 4? 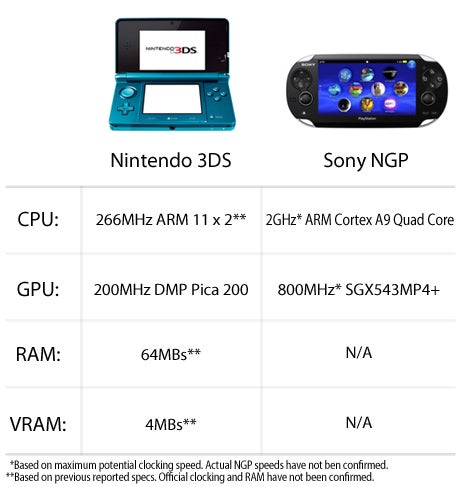 Just by looking at the specs alone, it's obvious that the Nintendo 3DS and the Sony NGP were cut from two very different pieces of cloth. While Nintendo focused on maximizing the graphical capabilities of the 3DS for 3D applications – utilizing a single GPU and two CPUs to produce visuals on a layered stereoscopic display – Sony clearly went for raw, unbridled power for a more conventional gaming experience. The NGP packs an ARM Cortex A9 Quad Core processor, which could potentially yield up to 2GHz or more of processing power, as well as a specialized version of Imagination Tech's Power VR SGX543MP4 that boasts a maximum clocking speed of 800MHz or more.

Of course, because Sony has yet to offer specifics of the NGP's processors outside of some basic information, the true speed of the device could prove to be higher or lower than the speeds listed. Also, other factors like software complexity and implementation will determine actual performance. Nevertheless, it's fairly clear that the NGP trumps the 3DS in terms of total potential power. 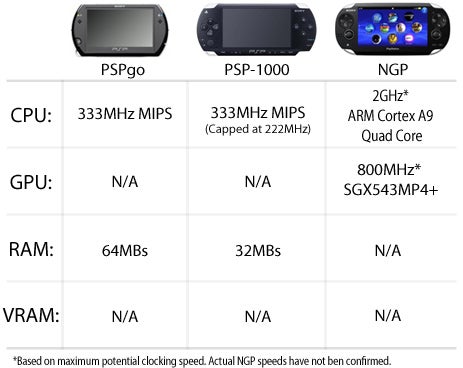 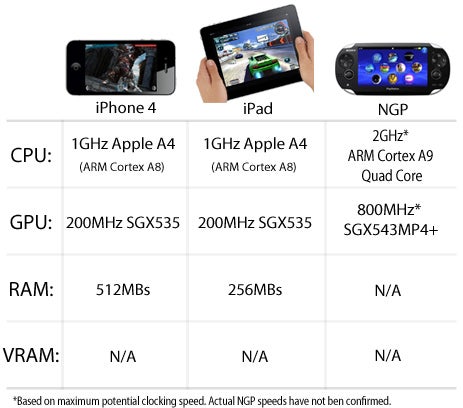 It may have not been a conscious effort, but Apple has overtaken both Nintendo and Sony with iOS 4 as the largest portable gaming platform; based largely on the success of the iPhone 4 and iPad hardware. Clearly both the iPad and the iPhone 4 are intended for uses beyond gaming, and subsequently the hardware specifications cannot account for the impact of other operations, but by the numbers, both are far closer to the NGP as technological rivals than the 3DS. In fact, the iPad and iPhone 4's Apple A4 processors are based on very similar architecture, including ARM Cortex CPUs and Power VR GPUs.

Wow it blows everything out of the water xD

Sigh it better not break the bank, if it's too pricey that will be a real turn off

I just hope that the battery life isn't under 3 hours (and probably is wishful thinking).

Impressive to say the least

At least NGP will be able to beat 3DS in one thing, Gilg.

You forgot to write "IMO".

that people is what you call an epic pwn xD Well at least we know its going to pack one hell of a punch :P