i used to read this mag alot but then i subscriobed to GI and i forgot about it. i had heard it had died and then i heard it came back like 3 months ago...

ill probably subscribe as a replacement to GI if this mag is any better. 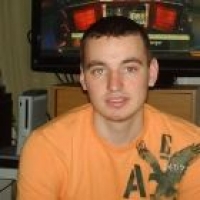 It's a great magazine, that and Game Informer is what I grew up with.

egm was always my favorite magazine.

Good to hear. I also grew up on EGM. Used to hide them inside other books at school during silent reading time back in like grade 6-8  =)

I resubscribed. Just got the Mortal Kombat issue in the mail a couple weeks ago. The content in the magazine is awesome.

I trash magazines. But one of the magazines (and favorite magazines ) I own and keep nice. Was the FFX Review, with the Limited edition cover with FFX concept art. :D

It's hanging on my wall

and I enjoyed that magazine more than any site on the web. I never subscribed, just bought the ones with the games I like in it though.

That is one of the rarest EGM's ever.

I liked EGM while I had my sub with them. I first saw a cover of advent children and I knew there would be awesome stuff in it. I subbed for 2 years but then cancelled it. I liked reading their peices a lot more than the ones in GI ( loved battlestation PS3.) Might sub again. :)

Coincidentally, last night I decided to clean out some of my magazines (which was a bad idea because now, my game room floor is covered with stacks of old video game magazines.  I didn't throw anything away.  I wound up reading game magazines and watching "The Karate Kid II" for four hours!).  I read about the launch of the Playstation 2, the upcoming Dolphin, how Microsoft had "Moneyhatted" Dead Rising 2 to keep it exclusive, and so many previews of games that wound up sucking or never even released!  Best night, ever!

What stood out was how many spin off magazines that EGM had in it's heyday:

Expert Gamer, EGM2, GMR, Video Game Buyer's Guide, Game NOW, and I'm sure I'm forgetting a couple more.  In their heyday, EGM was godly!  Slowly but surely, the fall of the magazine industry claimed all of these spin-offs and eventually, EGM itself.  It's great to have them back, though!

-And my plan is to throw away all of my issues of the Official Playstation Magazine, the Official Dreamcast Magazine, PSM, inCite, Next Gen, and GamePro.  Pretty much anything that isn't Game Informer, EGM, or Wizard (the guide to comics).