I personally think that Xbox will win in terms of raw GPU and CPU power, but PS5 will have better memory and storage solution.

The bets will be closed tomorrow when Playstation event starts.

Edit: VGC doesn't allow to close bets at certain time, so the bets will close on March 19.

Xbox easily. Sony might have a $450 machine that comes stupidly close to Series X at $500 though. That would be a huge win for Sony.

Just a tip regarding bets, if you change the date to a date prior so say, 16th now instead of 19th, it should close the bet, not an ideal work around but allows you to close it at anytime.

I think Xbox Series X but here's hoping it will be close.

Power? Surely the xbox series X, ps5 might have a pro model that reaches almost that power, but its all irrelevant, even 8TF with the next architecture would be more than enough, we are reaching a point of diminishing returns, even the xbox X and ps4 pro have enough power for most people if games were optimized for those consoles.

1800p resolution is already overkill, no one needs 4K on less than 100inch screen, unless you're playing on PC which people tend to play closer to the screen. And current consoles could do easily 60fps if games were optimized for it.

I don't think a lot of people will be upgrading this year, several reasons

2 - Coronavirus will dip into the savings of a lot of people who are out of jobs, I'm already here in the hotel with no guests, I'm hoping I can stay here doing nothing and still getting paid, but my luck might run out, I have other priorities than videogames, I need a new car, and I have house bills to pay, need to get the place painted too, which will cost over 1000dollars.

3 - Several ps4 exclusives coming out soon, some will be the best games of the generation, likely last of us 2, so there is no rush to upgrade yet

4 - People who actually cared for graphics and resolutions have already upgraded to X and pro, they surely didn't stick to launch consoles

5 - People with gaming PCs already will have all Xbox series games, so there's no need for an Xbox at all

With that said, I am sure ps5 will outsell the Xbox series 2:1, no questions about it, power really doesn't matter, its like the Xbox OG vs ps2, if Sony has at least 2 great exclusives at launch, such as GT7 and horizon 2, then that number might actually be 3:1

The Xbox one had luck because the 360 created a lot of fanbase, so people were excited, but look now, who is excited? I see no one talking about the new console, imagine in 8 months, everyone will have forgotten that Microsoft has a new console coming out.

Sony should announce as late as possible, to make the hype fresher closer to release date. Sony should not even advertise power, just advertise the new exclusives and its a win, as long as its at least 3x more powerful than ps4 slim, people will be more than happy.

Xbox most likely tho.

I take it we are using CGI and Pem's favourite flops

Xbox Series X sounds like it's going to be on the expensive side.
I don't think Sony are as keen with that approach, so I imagine PS5 won't be quite as powerful, but also cheaper.

It's pretty much already confirmed that the Playstation 5 will have a faster Solid State Drive. (At-least interface wise, real world performance can vary greatly.)

FLOPS just aren't an issue next-gen, integer and FP16 will be taking a larger front-and-center role thanks to Machine Learning and Ray Tracing requirements rather than Single Precision Floating Point (GFLOP and TFLOP).

Resolution and pixel density is determined by a range of factors like visual acuity of the individual (Eyesight for example can exceed 20/20), display size and how far away an individual is distanced from the display.

Plus higher resolutions does tend to resolve micro details in various assets better as well.

This is a rough guide, note: It does not take into account visual acuity of the individual, so there is some additional variance not accounted for. 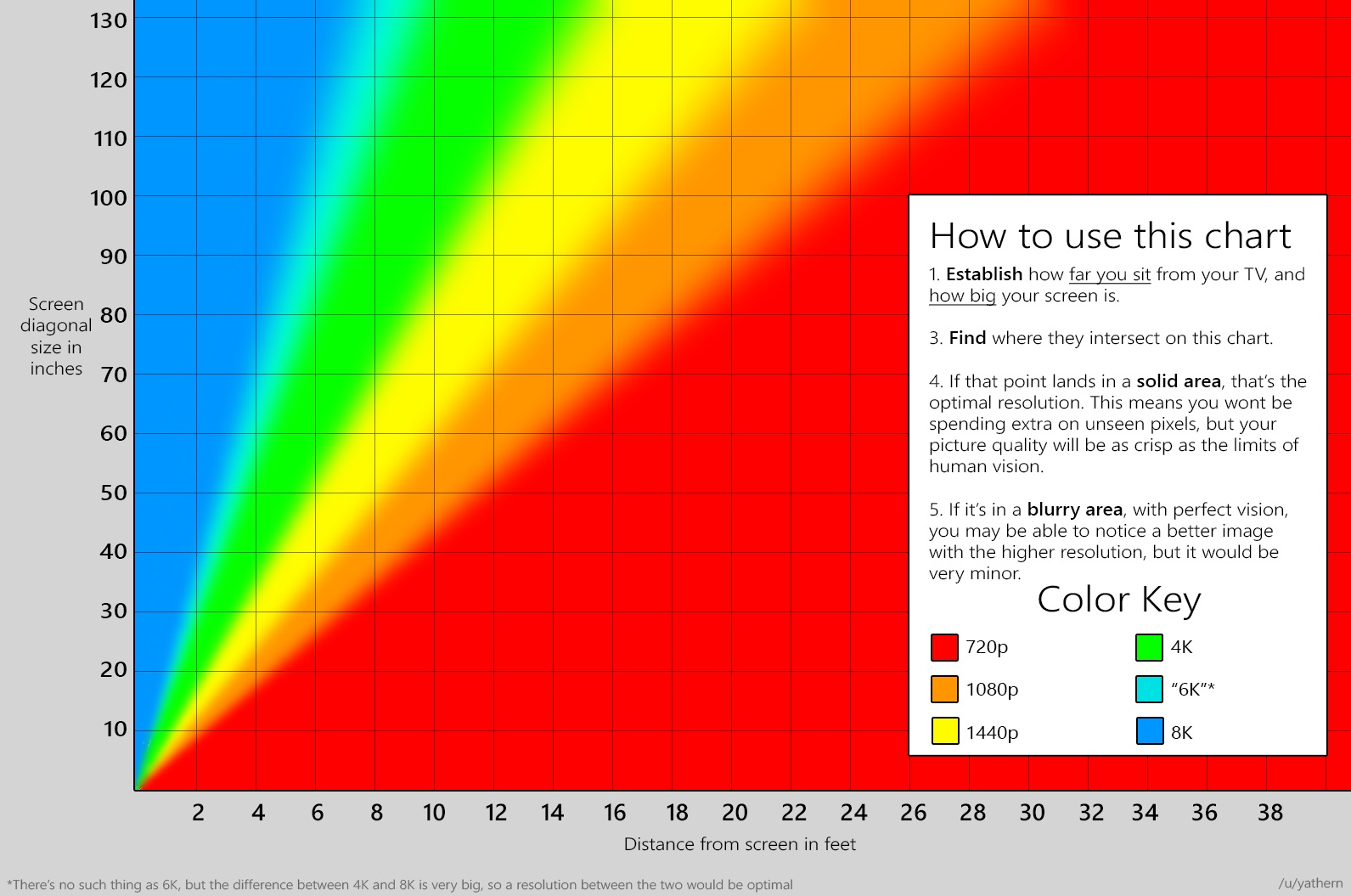 Sony will do what is best for Sony, they know what they are doing.
They will likely champion their storage subsystem capabilities above all else I think.

But Xbox would be very, very foolish to let Sony get the power advantage yet again. Much of the narrative this generation was established early on as "PS4 does it better" due to the power gap.