Ironically I've now stopped playing NMS because they've pandered to the haters, but I suppose it's still an achievement: 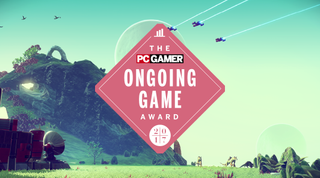 Our Ongoing Game award goes to No Man's Sky. After a rocky 2016 launch, the game's in better shape after this year's updates. Check out our other GOTY awards here.

Phil Savage: Here's a new category for this year's awards, designed to recognise an older game that had a great 2017 through patches and free updates. And whatever you originally thought of No Man's Sky when it released last year, this year marked a period of significant growth and improvement.

Andy Kelly: At launch No Man's Sky felt like a shell of a game. I squeezed 20 hours out of it, which is not insignificant, but in that time I felt like I'd experienced everything this supposedly infinite universe had to offer. But over time, thanks to a procession of hefty free updates, the game has evolved into something much deeper and ultimately much better. Whether it's base-building, vehicles, new biomes, or the story's clearer, more hand-crafted structure, Hello has slowly been transforming the game into something approaching the grand promise of those early demonstrations. I still think there's a lot of room for improvement, including more varied planet surfaces, but the developer's efforts to expand, deepen, and improve its colourful space simulator is something I think we should celebrate.

These updates don't erase launch criticisms but they do reframe the game.

Philippa Warr: I was one of those people who actually loved No Man’s Sky when it came out. Not in an all-encompassing passionate frenzy which blinded me to its shortcomings, nor the differences between marketing and game, but there was so much in that ambitious universe which already gave me joy. It was built for pottering in a way that reminded me of meandering along country trails with my camera, investigating pleasing views and tailing odd creatures.

The first big update to the game—Foundation—came towards the end of 2016 bringing things like base building, freighters and farming. In terms of how that made the game feel, it didn't specifically impact how I played it because I wasn't interested in commerce or on settling down. I was content to drift along in normal mode.

But, taking a more general view, the update felt like a statement from developers, Hello Games, about how they would be approaching the game post-release. The update implied a willingness to be more flexible over what the game could be—instead of forcing players to keep moving, never settling, base-building was a specifically supported element of the game. There were also a couple of modes to tweak the difficulty should you fancy it.

Foundation ended up being exactly that—a support structure and a statement of intent for 2017’s set of updates. Path Finder was the first and offered up vehicles, vehicle racing, base sharing, photo mode, permadeath mode, a whole bundle of quality of life improvements and more. It was photo mode which absolutely blew me away and either ruined or perfected the game for my purposes, depending on which way you approach it.

Photo mode was developed in collaboration with Dead End Thrills’s Duncan Harris. It lets you pause the game in the middle of what you're doing and switch into a free-ish camera mode. At that point you can line up your shots, apply filters as you might on Instagram, fiddle with FOV and depth-of-field, change the position of the sun in order to get the perfect shadows or the exact right time of day and more. Where I used to spend minutes on shots, I can now spend hours. I have previously spent entire sessions within the same five foot radius captivated by different light effects on a group of trees.

I believe Chris Livingston rather liked photo mode too, but the big draw for him in that update was the ability to ram wildlife with his new space car. Perhaps we should have combined our interests for some kind of artsy inverse Wildlife Photographer of the Year exhibition.

Atlas Rises came in August and, along with terrain editing and ancient portals, it seemed to sow seeds for co-op play. Multiplayer, or rather the ability to "see" other people in your game is one of the big sticking points from launch—the reality of the game didn’t match what had been described during development. The ability still isn't exactly in the game but there's a version of the idea in that you can see other players as floaty orbs with proximity-based chat, and Hello Games are billing that as a precursor to some kind of synchronous co-op.

These updates don't erase launch criticisms but they do reframe the game. Hello Games are using the process of post-release patches to respond to those criticisms and flesh out the game in ways that reflect and expand how people play it. More specific to my own interests is the fact that the game just keeps getting more beautiful through a multitude of changes both big and small. In my current game I’ve discovered a planet populated with trees that sprout octopus-like tentacles. Finally I’m ready to call somewhere home. I just have to stop taking pictures of it long enough to find a habitable base and claim the world as my own...

World of Warcraft and Minecraft deserved that award not No Mans Sky. Just my opinion.

This sounds more like everyone felt sorry for NMS than it  does earning the award.

They could have even given it to PoE, but they won't, because they are too focused on watered down games, bad ports and non platform based games (designed for the platform they are supposed to be talking about). PCG has been going down the tubes for some years now. You can see the comments section sharing the same level of disagreement with the site itself. The authors are basically disconnected from what the actual readers want to see.

Should have went to Path of Exile imo. What HG has done to NMS is just try to fix what they fucked up in the first place. I don’t think a dev deserves praise or gratitude for fixing a bad game. To each their own though.

Trully dissapointed by this.Numerous games deserve this award more than this trash.

I don't think it's them feeling sorry for it as much as them trying to justify their excitement before launch, so that it's not a black mark on them! If it earns some awards they can say "see, we played the long game in hyping it up!"

You should check out my YouTube channel, The Golden Bolt!  I review all types of video games, both classic and modern, and I also give short flyover reviews of the free games each month on PlayStation Plus to tell you if they're worth downloading.  After all, the games may be free, but your time is valuable!

Everquest is still going too with a new expansion every year. Ring of scale, the 24th expansion launched dec 12th. That's about 1.5 per year since release.

Anyway is NMS worth it to revisit. Is there more variety in planets now with actual changes when you get towards the center. I don't care about building a base or dog fighting, more variety for exploration would be nice with more realistic planet sizes, better flying physics and actual celestial movements. Multiple suns in the sky etc.

I feel like I should get a copy just to see what this game is. Its under $15 at this point.

Loved No Mans Sky when it came out and played it a huge amount. I'm hoping for a PSVR update before I get back into it. There has been so much additional work put into it and I still absolutely adore the graphic style and atmosphere. I thought I'd get back into after they have done all their updating of it but unsure when they will stop developing the game. Last update I tried wanted me to start with a new save and that put me off. I don't want to start a new save only for the next update to ask me to start a new save again.

Well at least they did something about it. That's worth something.