I'm going to leave this here since a few seem to like to argue the A New Hope vs Empire Strikes Back.  This is why that argument falls flat:

Back in 1977, when ANH released, VHS had just entered the market.  It wasn't until 1982 that it was put on VHS.  Not only did ANH's initial run last longer than a year, it actually had a few rereleases before it came out to VHS, which was all rolled up into its initial domestic take.  One of which came right after ESB left theaters, which added EP. 4 to the title. Point being, if you wanted to watch SW between 1977 and 1982, you had to watch it in theaters. When ESB hit theaters, the home video landscape had changed. Movies were being put on VHS a year or two after they hit the theaters. Films were being put on television, instead of getting umpteen theater rereleases.  TLJ doesn't have that excuse.

OP:  The Last Jedi, a movie that has greatly disappointed, or even angered, a great many of fans of the Star Wars saga, has just dropped a massive 69% WOW.  This is much worse than many were predicting, regardless of what they claim now.  It is much worse than the mere 40% that The Force Awakens fell.  Much worse than the ~50% other $200M+ openers did.  Even worse than the poorly received Justice League, which fell 56%.  TLJ is now $175M behind TFA after just 9 days.

Hope you sold enough Porg dolls to make up for it Disney.

As for the foreign markets, TFA opened with $281M.  TLJ opened with $230M.  Down $51M, or down 18%.  This, of course, could be attributed to the massive hype behind a new SW that TFA had.  However, now we have the totals as of the 24th, which accounts for two weekends and one set of weekdays.  TLJ is currently sitting at $380M in foreign markets.  At this same point in time, TFA was sitting at $546M.  So, the difference has grown to $166M in just 7 extra days, which means it is now down by 30%.  Seems the foreign markets aren't exactly thrilled with the movie, either. 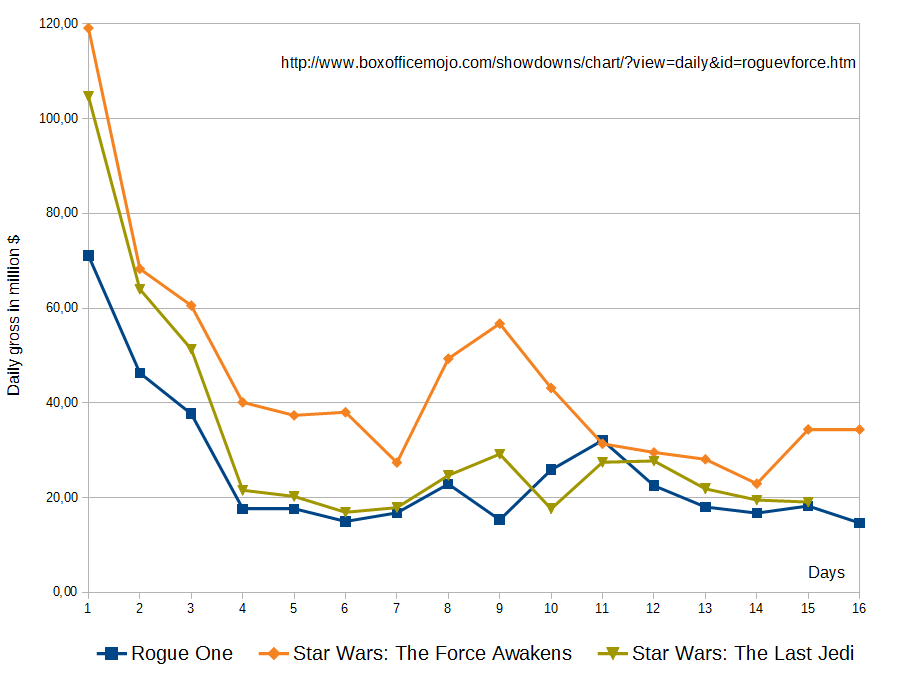 I decided to put a list here that Azuren made that I think clearly dispels the "Luke is a Gary Stu" arguments.  I just feel they are a strawman and trying to point out the same things over and over is getting old.

1. Luke's one gift in life was his pilot skills, which was attained through practice, not by virtue of being a female Protagonist.
2. Luke lived a normal Tatooine life; Rey "struggled" and is therefore more interesting by default.
3. Luke got fucked by Jawas and nearly got fucked in the cantina; Rey kicked the shit out of a group of armed individuals.
4. Luke was roughly on Han's level of skill when manning the guns in the MF; Rey is a goddess with all forms of technology even though that's not how the force works.
5. Luke had to struggle and concentrate to use force pull in the Wampa cave; Rey accidentally used force pull to much greater effectiveness with no effort from a further distance.
6. Luke not only lost his first lightsaber duel, but lost a damn hand in the process and nearly died; Rey humiliated Kylo, whose only disadvantage seemed to be because he was male.
7. Luke never pulled off any high level force techniques until he'd trained for 3 years; Rey accidentally did the mind trick on the second try.
8. Luke's skill with a blaster could be explained by his proficiency for gunning things down in his ship on Tatooine; Rey instinctively got a kill shot the second time she ever fired a blaster and proceeded to get an insane kill:shot ratio.
9. Luke struggled and failed to lift an X-wing, and barely managed to lift three rocks while balancing; Rey lifted rocks like it ain't no thang and does zero effort.

Movies like this become super blockbusters because of repeat viewing. A lot of people don't want this movie to even exist, much less give it multiple viewings.

Without spoiling anything, what was so bad about this movie? I haven't seen it yet.

Abrams from Episode VII will be directing episode IX right?

Yep. Colin Trevorrow dropped out after Disney had the script that Colin and Derek Connolly wrote together rewritten by Jack Thorne because they didn't like it. Then the script got rewritten again by JJ and Chris Terrio after JJ was made director. Yes, that's right, Chris Terrio, the Justice League and Batman vs. Superman writer is co-writing episode 9

I have almost no hope left for episode 9 at this point. Here's hoping the Han Solo and Obi-Wan anthology movies are good at least.

- Illogical plots that make no sense

- a long useless side story

- The terrible handling of Luke Skywalker

- The dude bro humour that replace mythological approach of SW

I guess it could also be argued that the movie was really front loaded, too. How does it compare to TFS?

This just in: the average crybaby doesn't know how to critique a movie.

Plus humor falls flat. There's a couple "oh, that's bullshit" moments. The main character we're supposed to get behind continues to use the God Mode cheat instead of actually facing any challenges. The other two main characters have no (positive) effect on anything and if they just sat in a chair the whole time, things would be better for the good guys.