A look at what we know and what might be in the works for the latest GTA -- based on tips, rumors, and established practices from previous Rockstar games.

We are now more than three months removed from Rockstar's confirmation that (surprise!) Grand Theft Auto V is in development. Aside from what was yielded by the days spent dissecting the premiere trailer after its release, new information has been impossible to come by as Rockstar has returned to being characteristically silent about what it has in the works. That has, however, left us with plenty of time to ponder what GTA V may have in store for gamers and how many of its key features could be enhanced versions of ideas seen in Rockstar games past.

Firm details are scant, though based on the trailer there has been a great deal of guesswork. GTAV returns to Los Santos and its surroundings, much to the chagrin of those hoping for a brand-new locale like London or Washington, DC. Like how GTAIV revisited Liberty City (which was used in theGTAIII series), Los Santos, Rockstar's fictionalized version of Los Angeles, previously served as the first of three cities in San Andreas. Based on the trailer we know the landscape will be diverse -- ranging from skyscrapers and Hollywood (known as Vinewood) to mountains and farmland. There are also beaches and countryside, so essentially we're seeing a lot of what comprised San Andreas' iteration of Los Santos -- only it will now presumably be much bigger and denser without two other cities taking up room.

One thing we know for sure that will differentiate the two versions of Los Santos is the respective time periods they are set in. San Andreas took place in the early '90s, whereas GTAV is very much set in the present -- economic struggles and all. The trailer shows a man putting a foreclosure sign in front of a house and a store with a "going out of business" advertisement, and money seems to be even more of a key issue than usual as indicated by the logo resembling the style of a 1907 $5 bill. GTAIV was set recently enough that it already had cell phones and the Internet playing a key role, but both could be further fleshed out to reflect some of the more recent advancements. If nothing else, being set in the present almost guarantees jokes will be made at the expense of iPads andTwilight.

The release of GTAIV marked a major tonal shift for the franchise. The silliness of GTAIII, Vice City, and San Andreas was largely gone in GTAIV; though it still didn't completely play it straight by including characters like Brucie and Yusuf. Nothing in the GTAV trailer indicated a departure from the tone of IV; luckily, fans of Rockstar's particular brand of humor have no need to be worried -- what with the presence of a store called "Glory Holes."

This is the first time in the series players will assume the role of a character with children (that we know of). The trailer's narrator, believed to be the middle-aged white man shown several times, speaks about having a family and trying to leave a life of crime behind -- a goal he fails at seeing through as demonstrated when he leads a jewelry store robbery. His family ties could come in to play at some point in the story; it's easy to see a situation where the protagonist's children get kidnapped after he steps on the toes of a fellow criminal or fails to see through a mission over some moral objection, Scarface-style. 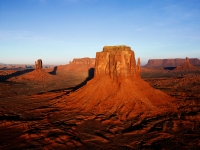 Didn't ever get to play Grand Theft Auto, but I sure watched my Son play a lot of it!!!! Like all day & night, literally! He was on either an XBOX or XBOX360 & I thought it went through the streets et al around NYC & Manhattan et al.?