Forums - Gaming Discussion - This is a Bad Time to be an FPS Fan [IGN Article] Is Mulitplayer Killing The Industry?


Is this a bad time to be an FPS fan? If you take the recent merciless public Metacritic mauling of Modern Warfare 3 as any kind of reliable barometer of the current public feeling, then the answer would appear to be a resounding yes.

The natives are restless. They're bored of more the same formula being wheeled out year after year. They've had enough of over-hyped blockbuster games with iterative multiplayer, a by-the-numbers campaign mode, and eye-rolling Michael Bay-esque storylines. The tech looks tired, they've seen it all before, and yet the review scores remain high, and the sales are even higher. What the hell's going on? Is the FPS scene really stuck in an interminable rut right now, or is it just a case of over-familiarity?

In fairness, it's a bit of both, but the thing that's increasingly obvious is how much the single player offering has become something of a lost art, and a sideshow to the main multiplayer event. Many times recently, friends have dismissed my concerns with a curt 'who cares about single player anyway?' Well, I do, and I'm fairly sure an awful lot of people agree with that point of view.

The strange thing is, it used to be the other way around. Go back a few years to the PS2 and Xbox era, and multiplayer was barely worth wasting time on - with Halo being the rare exception. For most shooter fans schooled in the classics, the campaign modes in the likes of Half-Life, GoldenEye, Unreal, Quake II and Duke Nukem 3D were something to savour.

This 'anything goes' approach lead to some outstanding and varied single player experiences, with System Shock 2, Deus Ex, No-One Lives Forever, TimeSplitters, Rainbow Six and Halo just the tip of the iceberg in a creatively fertile period around the turn of the century.

All of these titles brought something new, distinctive and intelligent to the scene, and they weren't afraid to test players in ways that would bloody the noses of modern audiences. It's a trend that continued long after the console multiplayer gained traction, and you only have to look at landmark games like Metroid Prime, Half-Life 2, Doom III, The Chronicles of Riddick: Escape From Butcher Bay, F.E.A.R., Bioshock, and the unforgettable Call of Duty: Modern Warfare for further evidence of the scene's former creative zenith. 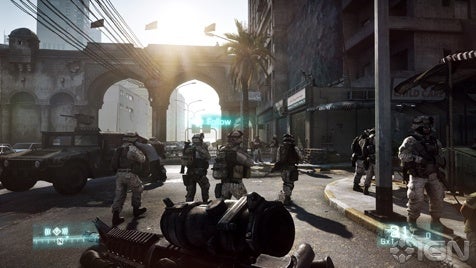 Can I help too?


But numerous recent FPS blockbusters have largely been remarkable for how reluctant developers appear to be to stray outside of their (and perhaps the mass audience's) comfort zone. In the last few months alone, Battlefield 3 provided perhaps the single most vapid, vacuous example of a single player campaign in recent memory.

After Bad Company 2, the expectation was that DICE would do something special. But rather than prepare you for its expansive multiplayer, it was content to funnel players along, and reduce your role to that of a wide-eyed spectator for significant chunks of the experience. It might have given players an opportunity to admire the wonderful Frostbite 2 engine, but also rather too much time to reflect on how little meaningful interaction you have with the game.

It's this continual insistence on removing almost all responsibility from players from many modern shooters that feels most irritating. Nothing is ever left to chance. There's rarely any opportunity to explore, or approach via another route, and therefore absolutely no means to experiment with different strategies in the way that you routinely have to in multiplayer. Just walk towards the objective marker, kill everything in your way, and remember to get behind cover to recharge your health.

Everything from recharging health to constant checkpointing, predictable AI and linear level design comes from an unhealthy obsession to remove anything that may be considered frustrating. But in doing so, much of the sense of satisfaction of actually conquering a level goes with it, and you end up racing through the game at such speed that you may barely recall what actually happened.

Part of the blame also goes to some lamentable attempts at storytelling. More often than not you're thrown into situations without a shred of context, alongside characters who you have no attachment to, and tasked with shooting a procession of bad guys right in the face for no other reason than "they're bad, mmmkay?"

And even then, it wouldn't be so bad if the moment-to-moment combat encounters had any credibility or substance at all. More often than not, the AI routines in FPS games still default to the tired whack-a-mole system that most of us were sick of a decade ago, where enemies run to a prescribed spot, and periodically pop their heads up obligingly for us to pick off at our leisure. Imagine my delight upon discovering that Modern Warfare 3 not only continues to employ this utterly pathetic system, but also respawns enemies unless you move beyond invisible checkpoints.

What am I supposed to do here? Oh, follow him.


Would it really be too much to ask to have more proactive and reactive enemies in games? Bungie managed it a decade ago in Halo, and it's now six years since F.E.A.R. appeared. Such ambition to push the FPS in a bolder, more expansive direction has largely stalled, as most developers focus on bombastic cinematics and impressive set pieces at the expense of anything of true substance. As much as I admired the immersive jet plane sequence in Battlefield 3, and the sub sabotage level in Modern Warfare 3, they may as well have been non-interactive cut scenes for the actual input required on the part of the player. And what's with the continuing obsession with Quick Time Events in shooters? Did we not realise this was a blind alley about seven years ago?

Assuming you don't care about the poorly acted, nonsensical storylines, predictable AI, done-to-death use of military scenarios, corridor focused levels, and complete absence of challenge and ambition that infects the campaign modes of most of the current crop of blockbusters, then yeah - it's a great time to be an FPS fan. Just make sure that you only care about multiplayer, and you'll be fine.

The rest of us, though, should continue to make our feelings known. Maybe someone will sit up and take notice.

This article brings up several points that I agree with and like the first comment says, "I've been saying this for YEARS now, the focus on Multiplayer has utterly killed games." I feel like games have lost a lot of substance when developers start focusing on Multi while ignoring the single player aspects of a game. So what are your thoughts? Do you think that FPS' of today are hurting the industry?

I've just come to believe that gamers love mediocrity, and are afraid of change. Anytime something outside the norm comes along they complain. Hell when it comes to CoD TONS of gamers bitch and moan every year that it's the same old shit (and it is) but yet they buy it anyways. Claiming it will be better than the last.

I don't think CoD or other FPS are to blame here. It's gamers because they continue to buy those products showing the industry they want more of the same.

Is it me or is this article completely ignoring Rage, which came out this year? If you want a FPS with great AI, that seems to be the game for you. Using a metacritic user score as the basis for resentment toward FPS's is silly though, as Modern Warfare 3's first day numbers show resoundingly.

This isn't only for FPS games, same thing is happening with RPG's. MMO are almost the only thing on developers' minds these days.
I fully agree with the article, and as long as titles like MW3 dictate the market there will be more room and incentive for creating casual spamfests with hollywood effects and the depth of the USA's budget surplus.

umm someone hasnt played Killzone 3.
you want a game that is different, and has Great AI. killzone is your game.
Killzone is lauded for its AI, as it should be.
shame that Killzone is such an underrated, under-appreciated series.
unfortunately its exclusive for the wrong platform, with the wrong title, to get the reviews, praise, and sales it deserves.

What a coincidence! It is a bad time to be a racoon fan as well. :)

But on topic, I think these games are good for the industry. People seem to get in the holiday game buying spirit once the big FPS start to come out. Look at the sales! Plus the COD games are usually so good that it makes the other companies have to step it up a little just to be competitive. Uncharted, Gears, Skyrim, Zelda, Rage, Battlefield, etc. Look at all these great games that are out or coming out. I do not even remember another time in gaming history where we were getting so many great games! Plus it show that big budget games still have a place in the world along side the cheaper iphone games that are being made now.

So I would have to disagree at this point.

FPS games are definitely becoming stale to me, at least with multiplayer. BF3 almost perfected the art of the multiplayer shooter IMO and I don't see where it could possibly go from here. Don't even get me started on military shooters.

Maybe the industry could take a clue from games like Timesplitters and throw realism out the window for a second. Even so, there's way less possibilities and stories that can unfold in multiplayer compared to singleplayer.

Take this game for instance. It's an FPS, but instead of holding a gun, you're holding a camera. Very unlikely candidate for a multiplayer game, yet a potentially awesome experience nonetheless. Is this game in demand, though? So many people complained that MW3 is a rehash, but they're still buying the game. They're voting with their wallets.

I have a friend who buys FPS games mostly for their singleplayer modes and he's expressed a lot of disappointment with games that have like 6-hour campaigns. What happened to SP-only games like Bioshock? Like you said, the storytelling in most modern FPS games is subpar, and I only hope devs start realizing its importance—even in multiplayer.

I agree with some of points here, multiplayer is clearly the priority in many games and gamers seem to flock to these games. However I don't think using metacritic user reviews is a good measure to judge public perception of a game, many of those who bought the games don't even know metacritic exists. Also I think Battlefield 3 is a bad example because battlefield has come from being a multiplayer only experience to including singleplayer, so clearly singleplayer is not the main priority.

I agree with Wagram on this!

Regarding the OP - this seems to be written by the worst journalist ever. The first line in the article is a huge red flag that this is just a troll article.