Did sony do enough to win november NPD? And I wonder what will happen when Sony does feel the need to drop the price and when... MS: All punch in the adrenaline booster.

Sony: Oh shit. All brace yourself. Most likely we will see a price drop at some point from sony in 2015. If not, it'll be shocking. What could/should have Sony done? I dunno

MS had Sunset Overdrive which got good reviews, but bombed anyway. They also had Halo MCC, and they also had lower price which can/does get perceived as better value. Plus Xbox is more top of mind game console reference than Playstation in the US, so anybody buying a gift generally just goes with the Xbox name.

Sony on other hand had botched Drive Club release. LBP really isn't a system seller, and I don't know what else... just 3rd party games that are more and more parity between PS4 and XBO in terms of performance stuff (I think). Ultimately, I think the price difference would have caused value perception difference, but more than that, I think MS just had Halo + Xbox name working for it.

People forget that Nintendo also has been on a roll in terms of well reviewed games. The Wii U is a sucks hardware compared to PS4/XBO and the Gamepad is a gimmick controller with more pain than gain in the design, but Nintendo still makes some of the best reviewed games and has most exclusives, so that also dips into the market. I really don't think Sony cares if they lose one months NPD lol. They'll go back to dominating for the rest of the year.

Maybe.. but who knows what will happen in 2015.  If MS keeps undercutting sony in price, not sure sony will be dominating next year.

Microsoft is probably losing money on these console sales... 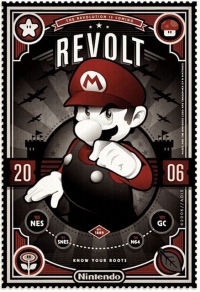 SONY needs pretty much every dollar they can get at the moment, unlike microsoft who could easely afford the price drop. They could however have done more marketing for LBP3, but that's about it, really.

Besides, I'm pretty sure when the price of the Xbone normalises again after the holidays their sales will drop dead for a while, unlike SONYs (or even Nintendos) sales. Maybe they cared more about profits than loss-leading simply for the sake of one month of sales bragging. Sony has dominated the past 12 months, MS was pretty much giving xones away and Sony still sold a lot of consoles. If MS keeps xone at $350 with two games, one of which a $60 AAA making the consoles more like less than $289.99, then yeah, Sony would need to have a price reaction. Until then PS4 is still dominating world wide sales and is competing neck and neck in the states despite being priced significantly higher.