This is so disorienting, I got a headache from watching those videos...

That sucks for you...I like that the game is crazy and there's ton of gravity puzzles...

And if it has as many "levels" as Mario 64...this could very well beat it. I think the only thing I'm worried about now is how many levels it has.

actually its 6 galaxies, with 40 areas like the paintings and 120 stars

Do we need a better understatement than that?

This profile is no longer in use, see my other profile *~Onna76~*

That is what i read too

On a side note, Super Mario Sunshine also had 120[+] stars, however, i spent only 4-5 days playing, clocking it and putting it aside.. however.. when i first got and played mario 64, i played it for months and months (no exaggeration)

So I think it really depends on the depth and interest that can be seen in the levels, rather than the amount of stars (of course, it still needs a decent amount of stars :P)

By the way, my order of preference for Wii games this year:
Galaxy
Galaxy (2nd time playing)
Metroid 3
Super Paper Mario (not released in Aus yet)
Brawl
Galaxy (3rd playthrough)

All fingers are pointed squarly at this man: 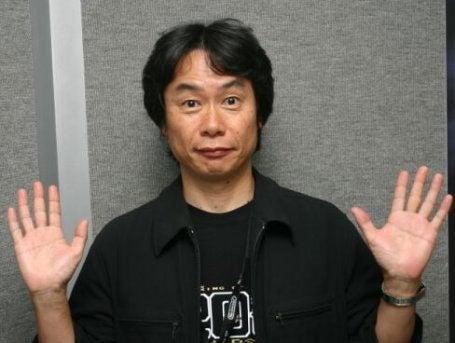 Well, Galaxy just passed Brawl for most my wanted game, but it's a neck-and-neck race :)

Mario Galaxy or Brawls.... hmm for me that ain't a hard choice... Mario Galaxy! Brawls I'm not so very much interested about. Perhaps I'll buy it but the game is not high on my list.


This profile is no longer in use, see my other profile *~Onna76~*

I hate to say this but. 200 times mario has been seen in games. Cant he just be a simple plumber? I'm dissapointed. I would be happier with a 'new' Mario64. (same game, new graphics, and some yoshi content)

Do you realise just how many people would be upset if that was all they did? I am quite sure they are appealing to a vastly larger audience with this Mario than they would with the Mario you would of made.

That said, I wouldn't mind playing your version, but am far more interested in SMG.