I looked throught the first 3 pages of Nintendo Discussion forum, so if this already existed, sorry.

As the new Wii Fit made the rounds on morning talk shows this week, a U.K. company was working on a buzzy tidbit of its own: a stripping game for the popular console. 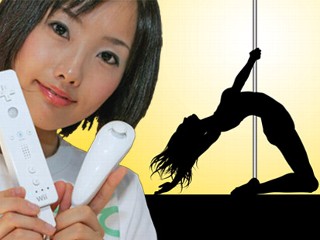 Peekaboo, a company that specializes in temporary at-home stripper polls, including one endorsed by Carmen Electra, announced this week that it's developing a strip aerobics game for the Wii.

"Peekaboo is pleased to confirm that it is in talks to develop a game for the Nintendo Wii that meets mainstream demand for the fun and fitness benefits of pole dancing," the company said in an e-mailed statement. "Peekaboo and its partners are focused on using Wii-friendly hardware to make aerobic pole dancing instantly accessible just as 'Guitar Hero' did for rock'n'roll."

Electra will not be involved in the game, according to the company.

"It would be natural for the platform. … That's the Wii's strength," said Rob Enderle, a Silicon Valley analyst. "If you wanted to create a stripper poll game, this would be the system you'd target."

In addition to its popularity — the system's newest game, the Wii Fit, has already sold out in the U.K. — another advantage of the Wii is its focus on non-gamers. Wii Fit uses a platform called a balance board to measure a user's weight and center of balance while performing about 40 exercise activities.

"Wii is the game system that is really about physicality … much more than the PlayStation or the XBox 360," he said. "Ideally, you would go after the Wii. That's the audience is that is attracted [to this]. This isn't for the typical gamer audience."

But according to Enderle and other analysts, the stripper game could cause potential problems for Nintendo, which has consistently made efforts to present a squeaky clean image.

"The platform manufacturer, in this case Nintendo, would have discretion and the final say. The licensee — also known as the third-party publisher — would submit the product for review and approval," said Hal Halpin, president of the Entertainment Consumers Association. "While Nintendo is likely looking for a wide diversity of content, appealing to the various demographics and ages of their customers, I'd be shocked if they consented."

I hope this comes with some really good graphics.

>"It would be natural for the platform. … That's the Wii's strength," said Rob Enderle, a Silicon Valley analyst. "If you wanted to create a stripper poll game, this would be the system you'd target."

I'm almost afraid to ask what Wii's strength is. *sighs*

Still probably will be better game that Wiicheer

Wow, just wow. I saw this elsewhere a few days ago and never even clicked on it because I thought it was a joke. Wow.

What's next for the Wiimote?

And if you did, will they have aftermarket glass wiimotes?

azrm2k on 18 April 2008
Electra will not be involved in the game, according to the company.

Damn, they just lost a sale.

And yeah I love this part:

"If you wanted to create a stripper poll game, this would be the system you'd target."

So, can a system legally get anymore hardcore than this? I think this would cement the Wii as the ultimate hardcore console, permanently shedding its casual image.

Or am I thinking of a different hardcore?

I might end up having to buy a Wii for my wife !

They just *might* pull this off past Nintendo if they use the balance board with the pole to measure posture and make it an yoga-esque game focusing on fitness. Then just make it open enough that people can take it and do there own thing with it.
"People are doing what with it? OMG Nintendo... we never thought that would happen...."

Theres no way this is real.