A futuristic first-person shooter designed from the ground up for Wii.

April 17, 2008 - With Wii, Nintendo has created the best-selling current-generation videogame system in the world and the company's little white box is showing no signs of slowing down. Case in point, March 2008's hardware and software sales – not only did the Big N's console destroy the competition (more than 720,000 people bought a Wii last month compared to 260,000 for Xbox 360 and 250,000 for PS3, according to NPD), but with epic titles like Mario Kart and Wii Fit just around the corner, demand for the system is sure to remain at an all-time high. And yet, developers faced with the prospect of creating original Wii titles don't always have rosy stories to tell, a truth attributable to the fact that so many third-party publishers remain unwilling to gamble on high-budgeted projects for the console. Something that skews older. Something that doesn't revolve around a series of mini-games. Something that looks better than a PlayStation 2 game.

The argument, going on in the board rooms of major third-parties around the globe, is that adult-oriented Wii software doesn't sell. That there's no market for it. Developers on the other side of the fence assert that there's no such proof since only a handful of quality games with an edgier style have even made their way to Wii, most of them ports. Several studios have flat-out told IGN that their attempts to make darker software for Wii have been politely declined by a host of big-name publishers. (And we'll have more on another such game in the near future.) 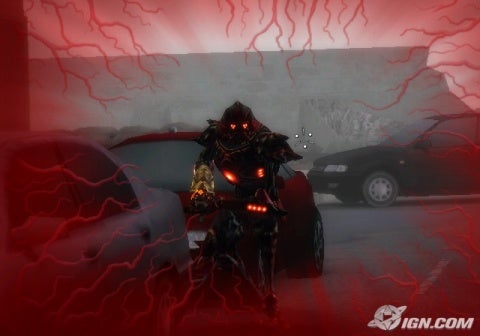 Real-time gameplay screen from the Wii-exclusive FPS, The Conduit
High Voltage Software, making games for 15 years, is one company well underway with a title built from the ground up for Wii. It's a first-person shooter that revolves around government conspiracies and alien cover-ups. It's using an advanced 3D engine that really makes the most of Nintendo's hardware. And it features a control scheme that fully utilizes the Wii remote. And right now, the game needs a publisher. 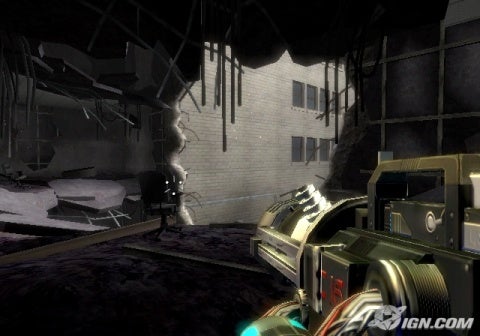 It's called The Conduit and it takes place during present day. Washington D.C. finds itself the epicenter of an extraterrestrial attack and it's up to gamers, as the secret service's Agent Ford, to discover the truth hidden behind the invasion. To do that, he'll need a variety of guns and the skills to use them. High Voltage calls The Conduit a straightforward first-person shooter in the style of Halo, Medal of Honor Heroes 2 or Resistance: Fall of Man – basically, fast, run-and-gun battles and stylized weapons. The Conduit also features advanced enemy artificial intelligence enabling "human-like behavior" and a special device called the All Seeing Eye (or ASE), which, according to the studio, allows players to "reveal concealed objects and enemies, providing a deeper level of puzzle-solving."

The developer has looked closely at the competition not only where theme and pace are concerned, but also gameplay controls. To that end, The Conduit will include a very customizable control scheme very similar to the one in EA's Heroes 2, which offered a fully tweakable bounding box in addition to Wii remote sensitivity settings. High Voltage's Eric Nofsinger, chief creative officer, says that the developer turned not only to Heroes 2, but Metroid Prime 3 for inspiration.

It all sounds very interesting, but we would expect any Wii first-person shooter to boast amazing control – (Red Steel aside, that is; we couldn't help it). What is perhaps more intriguing is that High Voltage has built a custom engine designed to really push the Wii hardware's graphic capabilities. The game-maker's "Quantum3" game engine brings polish to The Conduit by way of a "full 16-TEV stage material pipeline using up to eight texture sources and a host of innovative blend operations."

In short, it allows the developer to create graphic effects normally seen on other consoles with vertex and pixel shaders – specifically, dynamic bump-mapping (via tangent space normals or embossing), reflection and refraction (via real-time cube or spherical environmental maps), light / shadow maps, projected texture lights, specular and Fresnel effects, emissive and iridescent materials, advanced alpha blends, light beams / shafts, gloss and detail mapping, seamless resource streaming, projected shadows, heat distortion and motion blur, interactive water with dual-wave channels and complex surface effects, animated textures, and more. Readers may not know what all this technical jargon means – that's not the problem. The problem is that too many Wii developers don't know what it means, either. (Zing?) 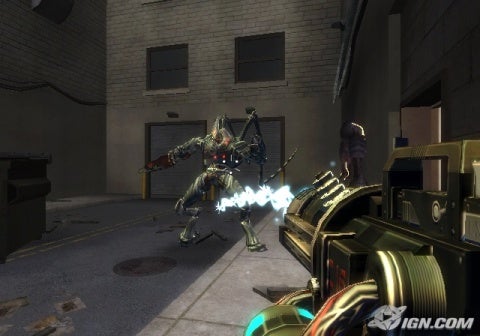 The developer looked at Metroid Prime 3 and Medal of Honor Heroes 2 for control inspirations
"We think it's a real shame that publishers and developers aren't taking advantage of the technical possibilities of the Wii platform. Most Wii games don't even look as good as the later day PS2 titles and that's a real slap in the face to consumers," seconds Kerry Ganofsky, CEO and founder, High Voltage Software. "We believe that third-party developers need to step up to the plate and deliver. The Wii platform is capable of a lot more than what consumers have seen so far. We're hoping to raise a new bar."

Nofsinger takes it a step farther. "Most of the games on the Wii look like crap. We want to change that, so we've invested heavily in our Wii tech over the past year. We have real-time normal mapping, reflection and refraction, post process full screen effects, real-time shadows, projected lights and textures, specularity and fresnel effects, emissive and iridescent materials, interactive water, morphing, and much more all running with a rock solid frame rate on the Wii. Our goal is to be the most technically innovative Wii developer on the planet." 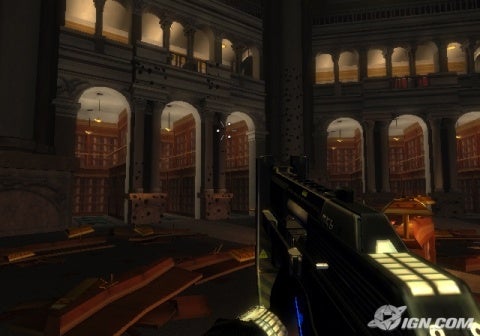 We'll have more on The Conduit, including first gameplay footage, soon
All The Conduit screens you seen included in this article (and in our media section) are running in real-time on the Wii hardware. Currently, the game runs at a steady 30 frames per second, but High Voltage is aiming for the Holy Grail: 60 frames.

Up until now, High Voltage has self-funded the project, but soon enough it will take on a publisher and endeavor to prove the point that the majority of third-parties are being lazy about Wii development, an assertion that we agree with. Of course, we can't completely fault the development community as big games require big funding, something that some publishers don't want to hand out when Wii games are concerned.

"There is this pervasive and cyclical argument that Wii consumers don't want mature titles, when there aren't those types of products available to them. And even more frustrating is the claim that Wii consumers only care about great gameplay. Of course they care about gameplay, but we believe if given the choice, they would want great graphics as well. It's just a cop out," says Nofsinger. "With Conduit, we are trying to make a Wii game that looks like a 360 title."

IGN will be showing off first gameplay footage of The Conduit soon. In the meantime, Wii fans should take a long, hard look at the screenshots provided and the video of High Voltage's Quantum3 engine in motion. Sometimes, it pays off to be first, to be the trend-setter. Just ask Activision, which gambled that Guitar Hero 3 for Wii would be a success, despite the fact that the genre was yet-unproven on Nintendo's console. Two million in sales later, the music title has sold better on Wii than it has for PlayStation 3 or Xbox 360. High Voltage wants to be the first to prove that Wii owners are ready and waiting for a high-quality first-person shooter, too.

Wii 3rd party support confirmz. I'm buying this game just so it sells well, and we get more fpses on the wii. Hopefuly it will be good though.

brawl4life on 17 April 2008
Those two paragraphs alone make me want this game now I have high hopes they better not dissapoint !

wow, third parties are so stupid and stuck in their ways... I will LOL while nintendo rolls out 5 million seller after 5 million seller, and Dev are all fighting for FPS shooter audience on the PS360.

You'd think Ubisoft would perhaps publish this, since they have brought some M-rated games to the Wii already. But maybe they don't want to publish a FPS that puts Red Steel to shame...


"I feel like I could take on the whole Empire myself."

Its so stupid that we cant get games like Call of Duty 4, Resident Evil 5 because its too dark and only little kids play the wii. Shit I am 27 years old, am i a little kid.

Interesting. Normally I'm not a big fan of "guy with gun vs aliens" games, but this does sound interesting and I do like wii fps simply because of the controls.

Oh yeah, also it's worth going to the link to IGN just to see the tech demo of what these guys are doing with the wii hardware. I can  never get IGN video's to embed.

This sounds really good. I'm guessing this is the "darker" title Matt has been hinting about for months.

Sucks that they don't have a publisher but i'm guessing somebody'll pick 'em up if they already got a decent amount of work done self-funding it then there isn't as great a risk. Hopefully they impress at E3 and get some hype going.

That tech demo also looks interesting. It'd be nice if they start licensing out that engine so other third parties have better tools to work with.