Not going to open it since I have the deluxe download version as well. Is this what you mean by size? 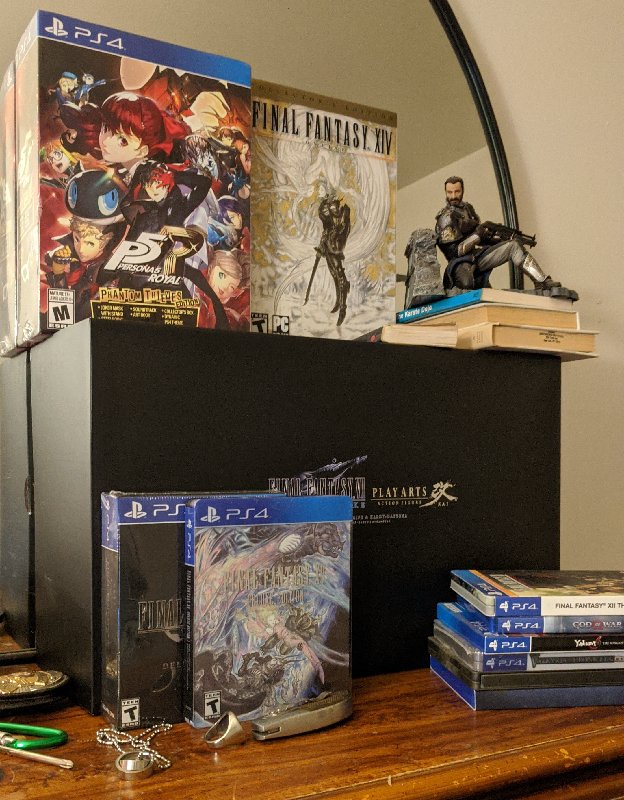 I don't have free time due to being a first responder. NYC Parks Enforcement.

yeah, just wanted to know if the whole thing is goin' on my shelf or just the steelbook

He hasn't played it yet. The joke was that I was implying that he's so defensive because he spent over $300 dollars on it, it's the old idea that people will defend something more when they spend lots of money on it, it's a way of justifying the big spend. It was meant in jest nothing to take seriously.

I see, thanks for your service.

One could in jest say that the reason you were attacking it so much is because you are a troll?

That doesn't really hold up very well. I've been saying that its cool if you like it but the people that have an issue with it are valid in there criticism. Nothing particularly trollish in that is there?

I don't think I've been particularly harsh on the game either, my only issues are with the story and pricing. From the demo the gameplay seemed fun and the graphics were gorgeous. I can't comment on much else as I haven't played the full game (I have seen a lot of gameplay and the ending on youtube)

I have to ask why are you defending someone that has been rude, obnoxious and dismissive to anyone that disagrees with him about this game?

Except on price you would be wrong since there are plenty games with less duration and content that have the same price.

On valid criticism several of that wasn't valid since they were more accusations of fraud from SE instead of insatisfaction, even more because those people just like you didn't play the game yet.

Was I defending him or just showing you the mirror?

What does that have to do with price, many games have more or less content and are sold at the same price. The full experience is going to cost €180 at least if you buy the games new. In my personal opinion that is too much for a remake. If that is fine for you great, I can respect that, but it isn't for me personally.

Those issues are valid. The game was advertised one way and has turned out differently that is a valid complaint. Those people are criticising what they know about the game which is the story. None of these people were trying to force there opinions of the games on anyone else. As I and others have said if you like the story and changes that's fine, but don't dismiss the complaints as invalid just because you have a different opinion.

I hope you enjoy and love the game man but you aren't going to change the way I feel about the changes to the story.

I don't know what issues you have with Deskpro to be exact, but you can raise them with the mod team. You shouldn't be condescending towards him about his game purchase. Especially in a FF7R hype thread.

And I don't imagine you've read every issue people have expressed. Either way, proclaiming that they're all valid seems questionable.
I've heard some comments that seem unreasonable, including your "1/3 of a game", or how you think the price should be lower.

What is your reasoning for that? You say you haven't played the game, so it seems to be based on your expectations of how much of the original 'game' (I put Game in quotation because most of what we saw in the original was not in-game, and that's important) is in this one. The new extra stuff is surplus we never asked for, that could have been content from the original instead, is that right?

If so, you are severely overlooking why it's so problematic to remake the original.
I think I'll make a thread explaining why later. But the jist of it is that back then they used various shortcuts to create a scope far beyond what was possible or reasonable. Midgar for example. And the huge amount of time they saved not having to design so many things in the original thanks to pre-rendered backgrounds, fixed camera angles, etc, or even have them run and function properly on the hardware, they could spend expanding the world further. That's why it was so huge and epic. It would have been a much shorter game otherwise, and an actual Midgar would have looked like crap.

Well now they actually are forced to design all those things, and make them run and function on the PS4. And the amount of work needed for all that has to be taken into consideration.

Let me put it this way. Even if this Remake was in PS1 graphics, just a free moving camera alone would double/triple/quadruple, etc the workload for environments, because it increases the amount of objects in view by that amount. Objects they could, and did, leave out entirely before. What was behind Seventh Heaven? Nothing, because we couldn't see it. Did Aerith's church only have 2 walls?
Assuming the PS1 version was already at a full game's budget, that means the game would either be cut short proportionally, or go over budget significantly.

And we're not dealing with PS1 graphics any more. Nor are expressionless faces, no voice acting, invisible enemies, or cities on the world map the size of postal stamps acceptable in 2020. But fans demand they remake something that was never reasonable as one game to begin with, in one game's budget anyway.

I'll go into specifics with images and examples in the other thread, but if you have some other reasoning, I'd like to hear it.

Those people simply misunderstood the marketing them, because it was very clear that there would be changes, multiple parts, etc.

And it is a full experience. Several media and games have trilogies and it isn't a problem "I have to pay triple to enjoy it". If you want to save money wait for the bundled 3 parts 10 years in the future with a deep discount.

Look, I dislike how the game turned out to be and Square Enix (and some reviewers) are a bunch of liars. BUT, this thread is about people hyped about this game. They share their enthusiasm for a game they have been anticipating for years. And they are happy to spend a lot of money in the biggest collector's edition they could find because they are just so thrilled about it.

You coming here to try to stop this good vibes and overall positive atmosphere is not welcomed and it's completely off topic. So, I suggest you to let people enjoy themselves here and go somewhere else to throw shit at the game. Or to people who are hyped about it.