Was Xenoblade in the same position as Fire Emblem Awakening?

Nope. It was completly different. Nintendo of America just didn't want to localize the game to the west. Nintendo of Europe did the localization following Project Rainfall which had for goal to bring 3 "major" JRPGs here : Pandora's Heart, Xenoblade Chronicles and The Last Story. Even then, Xenoblade got only a limited release with Gamestop which sold out more rapidly than they could anticipate.

Now, it makes me wonder why the support of fans could make this happen while we still have to wait for the official localization of Mother 3 which has obviously a ton of support behind it.

I am sure that is a significantly smaller hurdle to jump than actually getting the project off the ground. Larger hurdles would be Takahashi wanting to take on such a project, and that hurdle is directly linked to the actual scope of a remade Xenogears would dwarf FF7 remake in terms of content volume. Especially considering Takahashi would no doubt wish to put in open world elements (if not make the game an evolving open world/ traditional RPG hybrid).

As well, Takahashi has no need to ask Square Enix if he can teimagine his own story under the Xenoblade Chronicles X banner as long as he doesn’t violate any trademarks; he’d even be able to reuse certain names (as he has done in the past) if he wished.

It is, unfortunately, unlikely Takahashi would want to redo a project on the scale of a modern  Xenogears because of the scope. But I can always hope =)

Not entirely accurate NOE localized the 3 games for EU release but NOA refused to bring them to NA that's when OR happened.

People have nostalgia glasses when it comes to old games.FF 7 could have been made into being only one game, and Xenogears would also be the same case.

One of the greatest video games I have ever played. 120 hours in and still as fresh as a daisy, great stuff.

Deserves so much more! LOVED this game - put about 75 hours into the main campaign (rookie numbers).

So happy for Monolith. They make wonderful games. I really hope XCX2 or XC4 improves the visual fidelity, though - even if they have to simplify some of the visuals. XC2 looks quite rough on handheld and makes some shoddy compromises in docked play, as well:

1: you can't hide anything beyond the viewing angle of the camera;
2: it's unacceptable by today's standards to imply vastness and people on the outer periphery of the playable location, it will come off like a lazy 2004-2010 era game;
3: the conventions and standards of modern RPGs have to be built into the games;
4: even the original PSX version of Xenogears, which was already one of the biggest games ever made at the time, couldn't be done in one game -- large portions of the game were cut or significantly reduced in scope to presentations that would not be acceptable with today's standards. Jugend, for example, was an important section of Solaris, but you couldn't go there, and the whole thing was depicted very simply, and only in cutscenes.

When looking at how Takahashi and Monolithsoft do games today, you have New LA, which is a city roughly of the same scope as Bledavik, which is the capital of Aveh. 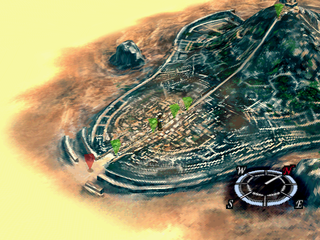 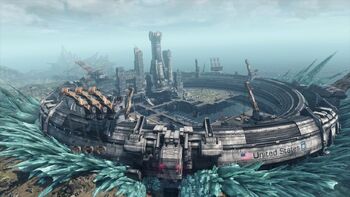 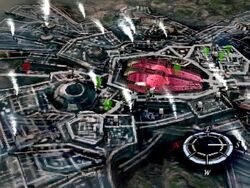 New LA is one of the largest cities ever created in a console RPG. It is larger than most (if not all) of the cities in Xenoblade Chronicles 2 combined. Bledavik and Nortune are two similar scaled cities. A Xenogears in 2020-2025 would look like Xenoblade game with Xenoblade conventions, not a city map with areas you can enter like Chrono Trigger with no option to look at around your surroundings beyond what fits into the overhead camera view: that would be disappointing.

Xenogears today would have multiple New LA sized cities. This is not something easily made without severely compromising the vision. This is something that Takahashi did with the original game - it was too big even with conventions acceptable in the PSX era. Important locations (such as Jugend) were missing from action, several other locations were shown as drawings or brief cutscenes, and they simply told the user "and your characters did this" before moving onto the next scene. Experiencing these scenes as intended are one of the major reasons that fans (like myself) want a remake.

Considering that there was disappointment from Takahashi and co of the compromises required for Xenogears, it's doubtful Monolithsoft would be enthusiastic about undertaking the project of a compromised remake of Xenogears; or one where they throw away all their new learnings and conventions to save on scope. What I want, as a fan, is a Xenoblade Chronicles style remake of Xenogears, where the whole story and world can be experienced in a modern game. When I say that Takahashi not wanting to undertake such a large project.

Not to mention, when events occur (like Shevat getting attacked), it alters a lot of the existing areas.

And, one other thing, you brought up "FF7 could have been made into being only one game, and Xenogears would also be the same case."

I wasn't trying to say otherwise. But since you bring it up, Xenogears couldn't even be done as one game during the PSX era; it was already probably the biggest scale RPG on the console, and it had a lot of scope cut down that many even in that time found unacceptable (especially during disk 2, which was kind of like half game, half documentary presentation). Game development isn't some magical thing with an unlimited number of resources and money; while they could remake FF7 as one game, it's clear the resources and money are not there to do it in any reasonable way. Monolithsoft is growing, they're also great at designing and producing a lot of content, but Xenogears made in the Xenoblade style would be larger than all 3.5 Xenoblade games combined.