If you can, sure.

But honestly, you won't need to play any of those. There's no way Insomniac are making Ript Apart with the requirement that you have played the future series and understood the story.

Especially considering that set of games is from 2 gens ago.

This game is just as much for newcomers (PS4 Ratchet beginners) as it is for veterans.

Dark Horse comics releasing God of War prequel comics on March 10th. Set between the third game and the 2018 release.

Should be interesting! Maybe we'll find out more about his second wife.

Man, the Undertale Platinum trophy was an absolute joke.

Sony could definitely promote this better. Now over 70 PS4 games can be upgraded to the PS5 versionen for free (I've pm'ed the user to get a full list).

PlayStation's upgrade program (like Smart Delivery) now includes over 70 PS4 games that can be upgraded to the full PS5 version for free. 💙 pic.twitter.com/9lEMeaM4dN

At least 20 Sony exclusives can be played in 60fps on PS5 (I know that Resogun, MLB and Journey can as well).

I'm loving Boost Mode and the free patches for BC. Nearly all the best PS4 exclusives are playable in 60 FPS on PS5.

We still need 60 FPS patches for Bloodborne, TLOU2, Uncharted 4, Horizon, and Death Stranding but a few of those should be coming soon. pic.twitter.com/IkwyfVEleK

The next time you buy a TV, consider getting one that supports 120 Hz and HDMI 2.1.

There's already a bunch of PS5 games that can be played in 120 FPS. pic.twitter.com/N6JmJ0mLAX

Did the majority of them, but I'm not grinding skills, money, or having to do all the quests again because I missed one.

So I've been playing Dark Souls 3, and earlier on I finally made it to Irithyll... even took a screenshot of my character cheering lol. So far I'm still conflicted as to where I'd place the game amongst the other Soulsborne games though. I'm still absolutely having fun with it, but I've had a few silly deaths simply because the combat and movement don't really mix well with each other. We've got the faster combat (Enemies especially!) of Bloodborne, but the clunky movement and rolling of Souls, so some bosses and enemies can feel a little unfair at times.

That being said, I've been sticking with my build, which is basically using Sellsword Twinblades, with the Old Wolf Curved Sword on my back and the Pontiff Left Eye ring, so I'm hardly using estus flasks unless it's a boss, since both those items recover health on hit, and if they both proc at the same time, they sort of overlap and shit themselves and it gives you a full heal rather than just healing 30HP (Ring) or 120HP (Sword) and it's just so fucking ridiculous and broken but I love it! The best part? Since I'm dual wielding swords, each hit counts as two, meaning after just pressing L1 four times I'll have had both items proc, and if I time my hits right I'll be "rewarded" with a full heal, lol. The OWCS also increases your damage per hit after so many consecutive hits, so that's helping out too.

I'm just sad that, unless I want to dive into the DLC right now (Not really) I can't upgrade my weapons any higher, currently at +7, but with an AR of 302 on a DEX weapon that attacks as fast as these swords do, and enough stamina that I can do six L1's in a row with enough left over to roll out... yeeeaaah, I'm hitting like a fucking truck and I love it!

Here's the screenshot because why not, Irithyll is really pretty to look at from here, so far it's actually tied for my favourite vista, along with Yharnam. 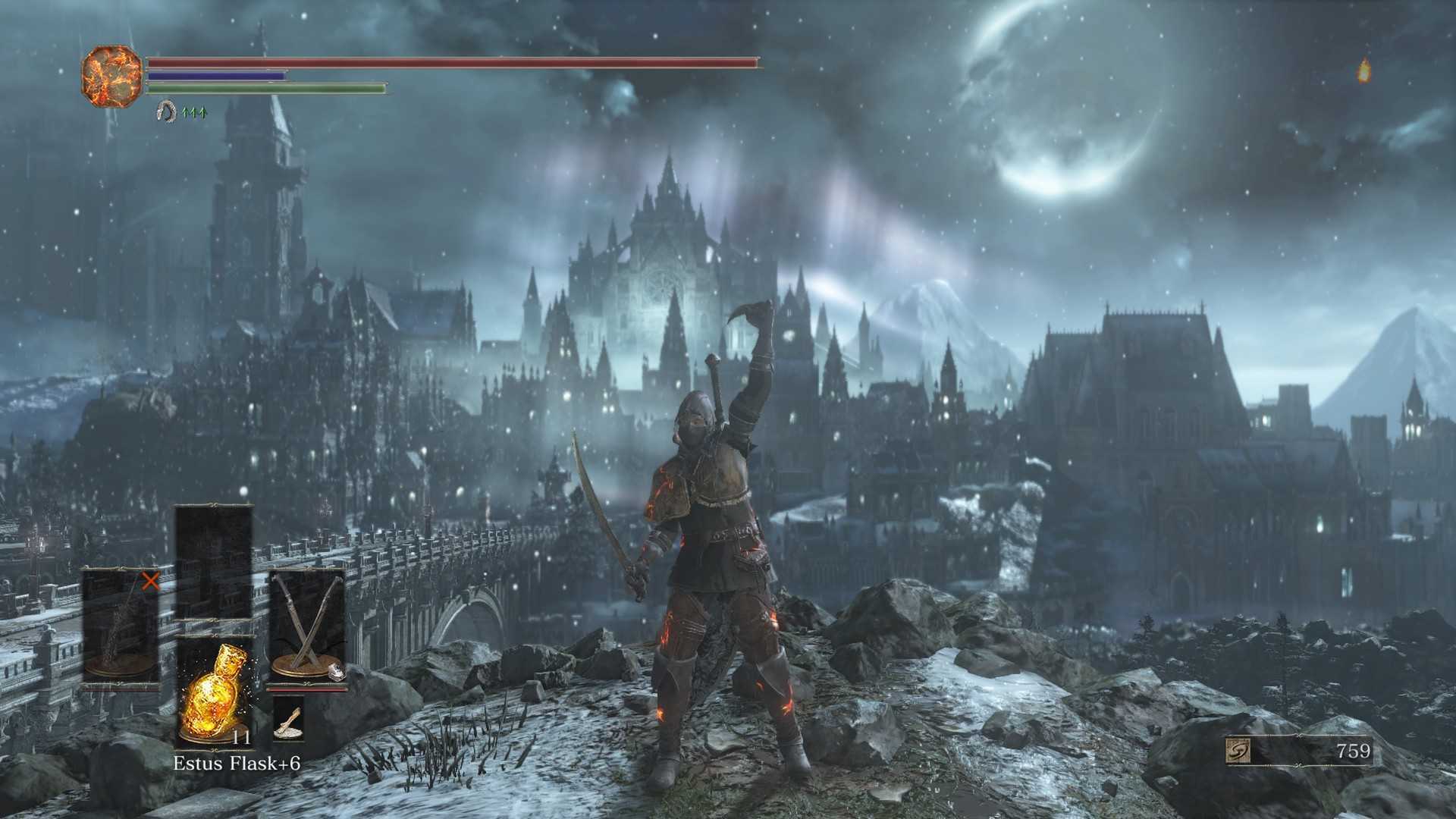 PS. Yes I'm using the Black Leather armour... it doesn't look as nice on Dark Souls 3 as it does on the original, but in the first game it was always my go-to armour for keeping things light, so I decided to keep the tradition going because let's face it... armour means fuck all when you're not getting hit, lol.

Should really try more Souls like games (have Nioh 1+2 and BB) but get distracted by so many other games and lack the patience to endure lol.

Playing MK 11 Ultimate rn that I got recently for the PS5, in anticipation for the movie and loving it so far. Tbh not really played much MK games in a long time and only watched a few animated movies and series so I'm not up to date with the latest goings, and a lot has moved on a lot since (think it was maybe MK3). Though I'm really liking the story and single player aspect so far. The gameplay is also very satisfying as are the combos and the roster is pretty nice. not sure who to main yet xP But yeah fighting games have been lacking good SP content for a while and WB has done a great job here.

It sounds to me like you might just not be using a good build. I have never felt that Dark Souls III was clunky or obtuse. Then again, I adapt pretty easily. I went from a nimble hoonter ninja in bloodborne to a tankyboi in Dark Souls so what do I know?