I liked his videos back in the day, but haven't watched any the last few years. When he was first diagnosed I couldn't imagine him losing this battle tbh. This is a cruel fate, but I hope John managed to find peace, as he did live a meaningful life doing what he loved and brought happiness to lots of people.
My best wished to his friends and family.

In a way he stays immortalized through his efforts. Sad that this type of cancer targets anyone whether healthy or not.

Ugh what a gut punch... cancer is so cruel.

Wait... What? I could've sworn he just uploaded a podcast episode only a few hours ago. Is this real?

"What about Co-optional? Well that's sticking around. The show must go on after all. We will be moving forward with our proposal to shorten the show to 2 hours per episode however. This is for health reasons but also because lately I've felt like 3 hours drags on too much, we find ourselves having to rely on way too much filler and its not been as enjoyable to do. Some might be disappointed by this though we found in a recent poll that quite a few people, more than those who said they'd be disappointed, actually wanted this change. There are only so many hours in a week. I'd rather have 2 hours of good, fresh content than 3 hours of discussion spread too thin, which the shows as of late have often been. As for weeks in which I simply cannot do the show (which hopefully wont happen but you can never be sure), Genna is going to be trained in production and will take on a host role, with the usual guests. Genna will be filling in for Dodger while she takes maternity leave anyway so, get used to hearing her voice."

I was really praying that John would find a way to somehow beat the odds, but in the end, he ended up going way too early.

I can only give my condolences to his family and loved ones.

Cancer is a real piece of crap, took the life of my mom's uncle, and almost took away my grandpa.

Some people can be so heartless: 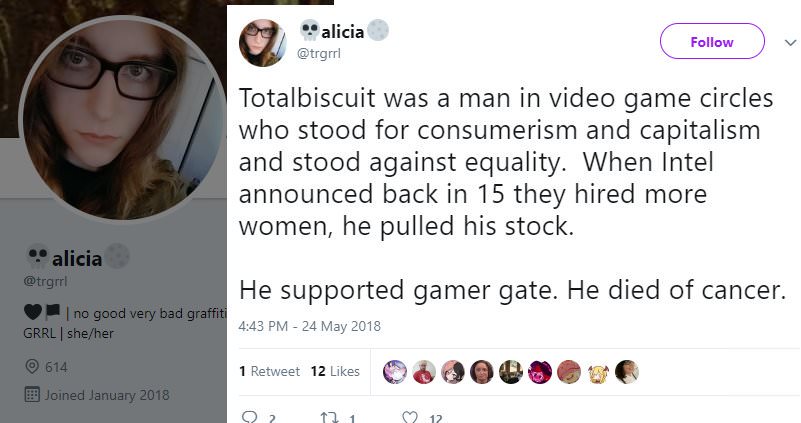 Well, I assume that's why he didn't want to divulge how much time he had left, because it was extremely short.