I agree, some people just take the console allegiance thing way too seriously.

Yea, ultimately, it’s great if all three console makers and third party developers are doing well. Predictions add to discussions on where sales could go and what could potentially transpire due to these sales. So what if one month is wrong? There’s always room for improvement, especially during time of the holidays. Nothing’s perfect, especially predictions.

If the tool were to get November right calling it correctly for the Switch, then it would mean basically that some of the bundles accounted for by the tool for last month were accounted for in a different month by NPD since both the Switch and the PS4 are widely reported to have done well during BF with a seeming slight edge for the PS4.
I retain a slight hope that the Switch might get a surprise victory this month.

I'm not holding my breath for a Switch win in November. It isn't impossible, but going by demand for the 199 PS4, this is Sony's month to lose. So if they come in second, it's all just down to stock.

As for the tool, right now the Switch and tracking sounds on point, Xbone probably slightly overtracked, but the PS4 tracking is way off. I don't think this will be easily addressed either. Last month was an issue of too much of the preorder impact being applied to that one day of tracking for the Smash bundle. This is a bit more of an issue as it seems mainly tied to the fact the Spidey bundle shot to the top and promptly went out of stock. So it didn't have time to gain points for PS4 and the tool can't distinguish between a system narrowly making #1 and an item selling 10x what #2 is. 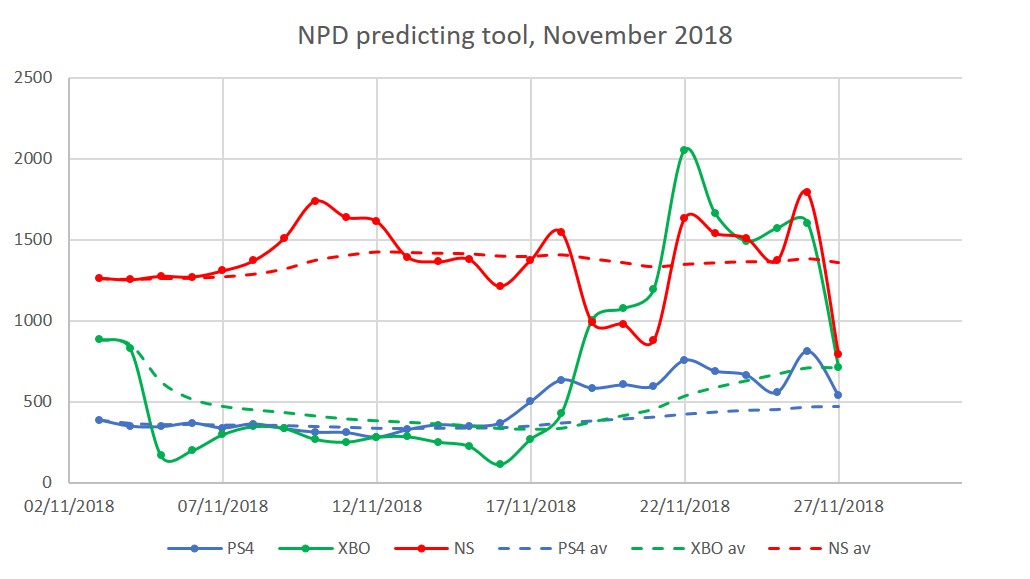 Gamestop having a black friday hangover...

Didn't we use to get black friday results in the past based on surveys? I wonder if we'll get one this year...

Switch and Xbox were going sicko mode but that drop after CM is pretty big.