Can we ever expect the weekly software updates to catch up to the hardware, or will it just be a month behind from now on?

The updates are in the process of catching up. There were problems with the code as well as an intent to tie all charts to the upcoming prediction league, so for a while there were no software updates. That should be sorted out now, so eventually hardware and software updates will align again.

Splatoon is a game when we think it will die, it just rises again. I think it likes to prove us wrong.

I don't have a bias against 2D Mario. It's clear that according to most of the Nintendo fanbase and other casual fans alike that a new 2D Mario game isn't in demand. It looks like a lot of old-school fans are content with Mario Maker and unless I dig through an entire chain of requests, I won't find a single one denoting a request to a new 2D Mario game. Clearly, Nintendo seem to be following demand here, as they've already announced Smash sooner than I imagined, Metroid Prime 4 is in development, Pokemon was hesitantly announced at E3, etc.

The ceiling may have been higher in the past but I'm almost 100% sure that's changing. People care less about 2D Mario and more people are getting into 3D Mario.

Mario is just too good

PS4 at over 42% marketshare, without digital. 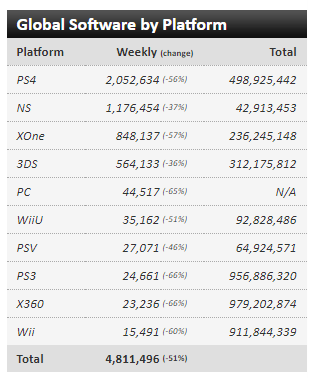 Why the massive sales drop? 50% less?