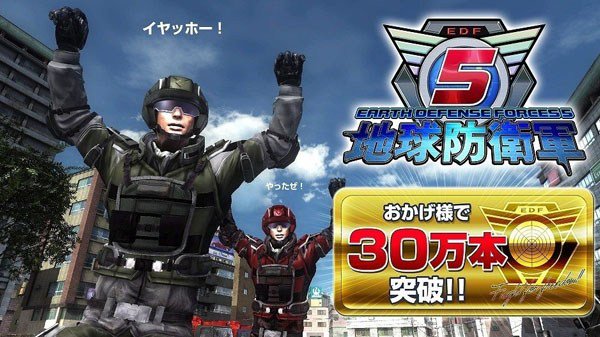 Earth Defense Force 5 launched for PlayStation 4 in Japan on December 7.

I'm a huge fan of the series. Have all the North American releases except for 2017 on the Xbox 360. 2025 has it's charms, but it's such a flawed experience when compared to any other games in the EDF line. You should try EDF 4.1 on the PS4, or 2017 and EDF 2 on the Vita if you liked 2025. Hope we get a release date for 5 soon, been tempted to jump on the Japanese version since 7 of my PSN friends have already done so.

if someday get cheap in psn maybe I buy, since niche games in brazil is very expensive (Physical).

Pretty great for an EDF game! I was really tempted to buy 4.1 on PS4 a few months back since I've not played a game in ages, the last one I played was 2017 for the Vita like five years ago, lol.

This game looks really cool. Might pick it up.

Never play EDF before but loved the craziness this series known for. Was so close to buying EDF 4.1 until I heard this one coming out

It's well worth buying if you have any interest in the series. So much fun. The 2 Vita games are great too, but this is even better. Avoid 2025. The online component is broken. I played over 500hrs to get the 100% and the plat. It's the most grueling run in the series, but still, a highly enjoyable endeavor. I still play on the odd days I'm actually home. Even as a curiosity, it's worth it to try it out, but much of the online community, which is very hardcore, has migrated to the Japanese EDF 5 import. I now have about a dozen PSN friends from North America, the EU, and Australia who imported it or made a JP PSN account to double dip. There are still some heavy hitter on 4.1, but unfortunately, since last december, mod cheaters have infested the game on PSN. It happened much faster on PC. Hopefully they won't ruin EDF 5 too quickly.

Their best selling game ever in Japan and it won't stop there. Good to see Japanese niche games still doing well on ps4.

Interesting. I'm not really into online gaming so no loss there. I heard EDF 5 is the first to have giant mecha combat, if true then more reason to wait for that version