I didn't expect a new game soon and it's the first time the Valkyria Series appears on a Nintendo platform.. i guess :P 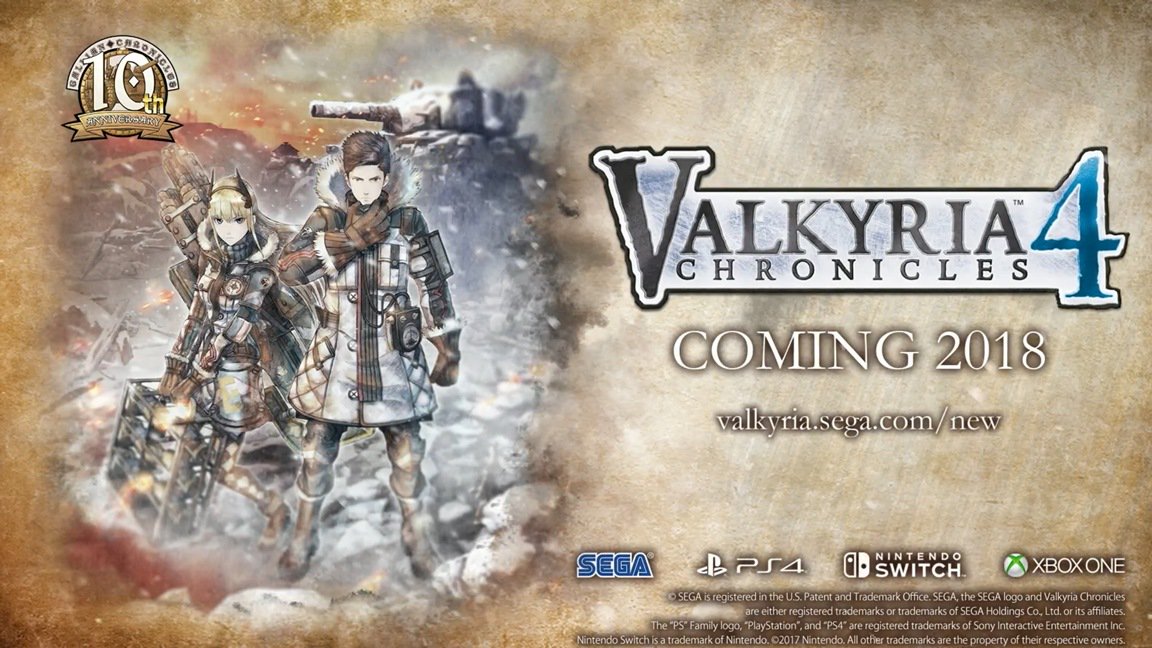 Here’s an overview of the game, via Sega:

The continent of Europa is engulfed in the flames of the Second Europan War between the Atlantic Federation and the Autocratic Eastern Imperial Alliance. Although the Federation struggles valiantly against the Empire’s forces, the relentless imperial military machine threatens to consume them. With victory slipping away, the Federation executes Operation Northern Cross: a last-ditch attempt to capture the imperial capital and end the war.

Commander Claude Wallace and his loyal childhood friends in Squad E are sent to fight for the desperate operation’s success, but they will have to endure harsh bone-chilling elements, waves of imperial soldiers, and the terrifying Valkyria… and unravel a grave truth that will shake them to the core.

A Coming-of-Age Story in a Time of War – Valkyria Chronicles 4 takes place in the same timeframe as the original Valkyria Chronicles, but focuses on a whole new cast of main characters. Players will take command of the eager, young Commander Claude Wallace, engineer/heavy weapons extraordinaire Riley Miller, hotheaded Darcsen Raz, ice-cold ace sniper Kai Schulen, and more. Together, they will experience the painful realities of war–but will the bonds of Squad E’s friendships survive the frozen battlefield?

The Next Generation “BLiTZ” Battle System – The part overhead turn-based strategy, part RPG, and part real-time 3rd person shooter “BLiTZ” battle system returns to the field. New features include an explosive new class called the Grenadier, numerous offensive/defensive battleship support options, chances for a unit to have a “Last Stand” action before death, and more. Plus, fight the imperial threat with more units on larger-scale maps than ever before.

CANVAS Aesthetics – The series’ signature hand-drawn visual style is back and overhauled for the newest generation. Inspired by watercolor compositions, the CANVAS Graphics Engine blends visual elements of reality and imagination to create an expressive world filled with colorful emotions. Watch the journey of Squad E unfold like an interactive painting!

The Return of a Legendary Composer – The illustrious Hitoshi Sakimoto, original composer of the Valkyria Chronicles series and countless other emotional epics, returns to provide a sweeping orchestral soundtrack for the game.

Xbox one?! So Phil’s trip worked I guess? Wonder what this means for future Yakuza and persona games?

My only experience is the PC-port on Steam for VC. I’ve played a few hours of it but while I enjoyed it never had a chance to finish.

I’d get this one on the Switch. Mosty because it seems like there won’t be a PC port and just don’t feel like getting it for my PS4. As that has enough of a backlog that I’ve not completed...Horizon, Persona 5, KH collection...

Is there a difference between this and the Revolution game that came out recently?

All I ever wanted. Hell, I would have been happy with the original on Vita. Next year is going to be awesome.

It would be stupid of Sega to just release the first game on Steam, and then suddenly cut the line entirely. It's likely to be announced at a later date, like most games are these days.

How am I supposed to support these games if these companies don't release collections? I have seriously considered buying a PS3 just for the Metal Gear Solid PS3 exclusive collection.

Oh well, maybe I can just play the first and skip the rest (?)

Do I need to have played previous games in the series to jump into this one? From what I've read it seems like a separate story but thought I'd ask anyway.

Looking to branching out a but more with my gaming. I used to play a lot of JRPG's and the like but have toned it down in recent years. Closest thing to a jrpg I've played this gen was Child Of Light made by Ubisoft. Lost Odyssey was the last true JRPG I played and that was on the 360...

Oh wow, it'll be on all 3 console platforms. Truly great for the GAMER.