The controllers are coming "this holiday," and will come packed in with Acer's headset for $399.

Announced at Microsoft's Build developer conference, the motion controllers will work without external tracking sensors, offering "precise and responsive tracking of movement in your field of view using the sensors in your headset," according to Terry Myerson, executive vice president of Microsoft's Windows and Devices Group.

You get the headset and the motion controllers for $399.

Microsoft has done it again.

Now just need to announce at E3 that this will work with Project Scorpio.

vive clone minus the design quality much

Alot of info coming out of Build Conference.

Assuming this is compatible with Scorpio, it should sell well. It's $100 cheaper than the PSVR bundle that includes motion controls, and it has more modern motion controllers, PSVR uses those 7 year old PS Move controllers.

Cool. I personally like augmented reality better than virtual. Even a new combination of the two would be awesome. You know this will be Scorpio compatible.

A mix of both AR / VR was just the right way to do it.

MS seems to be trickling out all of these tech info bits. It should make the E3 conference more capable of just talking games, not explaining how the tech works...

Actually the upcoming headsets are just VR. There is no headmounted camera to stream the real world nor is it see through. It connects to MS' new mixed reality platform, yet you'll still need a ($3000) hololens to actually get the AR experience.

It has a cord. 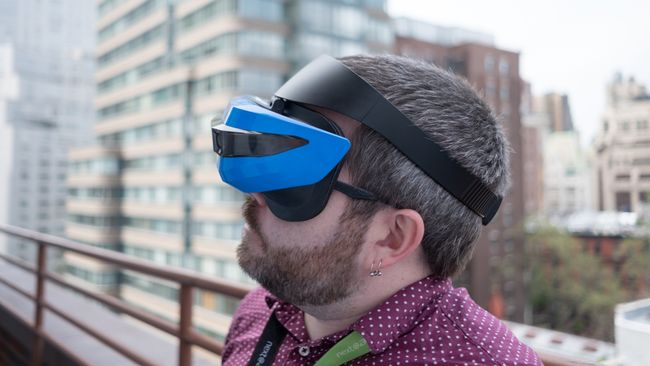 Positives:
- 1440x1440 per eye, highest resolution yet
- lightweight
- lowest system requirements (not sure how they pull that off with the highest resolution glasses)
- Cheapest headset so far
- Inside out tracking (no need for external sensors, I wonder how well it will work in the real world)

Negatives:
- LCD instead of OLED
- lowest fov (95 degrees)
- Curvature of the lenses is a little obvious, distorting images at their edges

I tried a few demos of apps and experiences in Windows Mixed Reality, one in an office setting and one at Acer's New York press event. My experience varied. The headset feels light and pretty comfortable, like a smaller, lighter PlayStation VR. It rests on my head and flips down over my glasses like a visor.

From there, it's more of a mixed bag. The visuals aren't bad, but I thought they looked better than Dan Ackerman did, who thought it was a clear step below both Oculus Rift and Vive. Microsoft's "mixed reality" hub for Windows 10 definitely has an Oculus vibe: A "Cliff House" open-walled central home hub, overlooking the mountains, feels like the open-aired virtual living-room hub of Oculus Rift. That home has walls where different apps can be experienced. I walked up to one wall where an Edge browser showed me videos and news. On another wall, I browsed movies and videos, including a 360-degree video shot with an array of GoPros. Another app, Holotour (also available for HoloLens), shows a 3D spinning globe where I can zoom in on panoramas. It's no Google Earth, though.

Microsoft's VR-slash-mixed-reality strategy is also designed to work across Windows 10, so that you could work in one app and hop into another, all with your headset on. However, this headset will use Microsoft's app store as its pipeline for VR games and apps and won't be compatible with Oculus Rift or Vive software. Which means... one more Windows VR platform.


It all depends on the games. Browsing Windows in VR doesn't sound exciting at all.