In technical and professional terms, that is what's known as fast as fuck. Holy hell.

It should have launched in September if not earlier.

Anyway, here's a clear example of how to pick a news story and present it as is, or twist it to make it more sensationalist:

Both are true, but the idea that those headlines transmit are quite different.

By the way, I won't be able to post the news at the usual time, so I'll do it later. And maybe it twill be the same tomorrow.

Later than usual, but here come the Monday news, all in one post:

GreedFall sold over a million copies, is getting an expansion
https://www.pcgamer.com/greedfall-sold-over-a-million-copies-is-getting-an-expansion/
In September 2019 developer Spiders and publisher Focus Home released GreedFall, a fantasy RPG inspired by 17th century colonialism. Though it didn't set the world on fire, its mixture of faction conflict, moral choice, and romanceable companions filled the Old BioWare-shaped hole in many players' lives. As our reviewer Lauren Morton said, "If Dragon Age is a veteran gone on sabbatical, GreedFall is keeping its seat warm without making a mess of the office in its absence."
GreedFall has gone on to sell over a million copies and will be getting a new expansion. It's coming as part of a partnership with publisher Nacon, coinciding with new console ports for PS5 and Xbox Series S/X. The announcement doesn't detail what the expansion will be about, though it does mention Focus Home Interactive will be in charge of publishing "the upcoming additional content and expansion". That "additional content" note suggests there might be some smaller DLC or updates coming to GreedFall as well, which only has the one bit of DLC available at the moment—an Adventurer's Gear pack containing the preorder bonus weapons and outfit.

The Yakuza series has cracked 14M sales
https://www.pcgamer.com/the-yakuza-series-has-cracked-14m-sales/
Sega has released its annual integrated report for 2020, including the lifetime sales of its game series, and the Yakuza series has cracked 14 million copies sold across all titles. Compared to its series total sales stats of 11 million total copies from 2018, the year that Yakuza 6 released in the west, and 12 million in 2019. This means that over 20% of Yakuza's lifetime sales have come from the last two years, entirely out of proportion to the series' 15-year lifetime, though not out of proportion to the number of games released. It's a big turnaround for a series that was widely considered to be declining in popularity relative to the growth of the industry.

GOG starts the week with the Black Friday sale Cyber Monday Sale, with up to 91% discounts until tomorrow.

Like the one above, the Fall Sale at Humble Store will last another day.

And Fanatical is also moving into Cyber Monday, keeping its flash deals (today they're F1 2019, Control and Death Stranding).

Blade Runner: Cells Interlinked 2021 is a free total conversion mod for Serious Sam Fusion
https://www.dsogaming.com/news/blade-runner-cells-interlinked-2021-is-a-free-total-conversion-mod-for-serious-sam-fusion/
Blade Runner fans, here is something really special for you today. Modder Syndroid has just released a Blade Runner total conversion mod for Serious Sam Fusion. This mod features 1-2 hours of story-driven gameplay, and you can download it right now.
Blade Runner: Cells Interlinked 2021 takes place before the events of short film: Blade Runner: Blackout 2022. The game centers around Trixie, an escaped replicant battling for freedom in a world where she is forced to obey.
According to its creator, this mod features story driven campaign with cinematic presentation and setpieces. It also comes with voice-acted characters, as well as a variety of different game/map design elements.
>> You can find it at Steam.

Fan PC Remakes released for the Phillips CD-i Zelda: Wand of Gamelon and Link: Faces of Evil games
https://www.dsogaming.com/news/fan-pc-remakes-released-for-cd-i-zelda-wand-of-gamelon-and-link-faces-of-evil/
The Phillips CD-i Zelda games, Zelda: Wand of Gamelon and Link: Faces of Evil, are among the worst games ever released. In a surprisingly turn of events, though, an individual has decided to port them over on the PC, remake them, and fix most of their issues.
According to their creator, these PC remakes feature widescreen support and a remastered mode for less frustrating play. They also come with subtitles, touched up sprites, unlockables, and more.
>> If you want to have nightmares, check the article for the download links from MEGA and Torrent, for both Windows and Linux.

This 1.6GB Mod for Skyrim Special Edition overhauls all of its effects textures
https://www.dsogaming.com/pc-performance-analyses/this-1-6gb-mod-for-skyrim-special-edition-overhauls-all-of-its-effects-textures/
Modder ‘Iconic’ has released a new AI-upscaled HD Texture Pack for Skyrim Special Edition that overhauls all of its effects. Now since this pack does not feature any other textures, you can use it alongside other HD Texture Packs. Going into more details, the modder used Kartoffels Cleaned Skyrim SE Textures as a base. He then upscaled all Effects textures with an AI upscaler, and saved in BC7 file format. As with other AI-upscaled packs, this one is 100% Lore/Vanilla friendly. Moreover, it keeps the art style and aesthetics of the vanilla textures.
>> You can find it at Nexus Mods.

Apex Legends' new Trident hovercars have taken flight
https://www.pcgamer.com/apex-legends-new-trident-hovercars-have-taken-flight/
Introduced in the battle royale's seventh season, Apex Legends' new Trident hovercraft isn't exactly known for its altitude. But with the careful placement of a trampoline, players have figured out how to give the nippy little buggies some impressive airtime—temporarily, at least.

A big new bug means Destiny 2's Trials of Osiris has been cancelled at the last minute
https://www.pcgamer.com/a-big-new-bug-means-destiny-2s-trials-of-osiris-has-been-cancelled-at-the-last-minute/
Shortly after Destiny 2: Beyond Light went live, Bungie pumped the brakes on the hardcore PvP mode Trials of Osiris because of a bug that would "negative impact the competitive experience." It was scheduled to return to action on November 27, but November 27 is now here, and Trials, I'm sorry to say, is not.

Wolcen: Lords of Mayhem's first content update will completely reset the economy
https://www.pcgamer.com/wolcen-lords-of-mayhems-first-content-update-will-completely-reset-the-economy/
It's been an interesting journey for the Diablo-inspired action-RPG Wolcen: Lords of Mayhem. It was announced, with the title of Umbra, all the way back in 2015, enjoyed a very successful Kickstarter, went into Early Access in 2016, and then finally launched in early 2020 to decidedly less-than-great reviews. It was supposed to be "a grand evolution of the genre," we said the day after it came out, but ultimately proved to be "a bog-standard ARPG propped up by deeply complex character progression and highly-mobile combat," and worse, was riddled with technical issues.
Several updates have been released since then, and today developer Wolcen Studio announced that the first free content update, Chronicle 1: Bloodtrail, is coming soon. That update will include "gameplay improvements and new content," and more importantly, "a complete reset of the economy."

Flight Sim's next update takes off for Great Britain
https://www.pcgamer.com/flight-sims-next-update-takes-off-for-great-britain/
Just on the heels of its big USA update, the wonderful Microsoft Flight Simulator has announced that their next big update will focus on Great Britain. The update will bring new terrain and map data to England, Wales, and Scotland. They're calling it a United Kingdom update but they don't have data for Northern Ireland, so that's not a good name. Great Britain is right there Asobo. They announced this update on a recent Q&A Twitch stream.

Classic JRPG SaGa Frontier is getting remastered in 2021
https://www.pcgamer.com/classic-rpg-saga-frontier-is-getting-remastered-in-2021/
It's a good day for games that came out a long time ago, I guess, because Square Enix has announced that SaGa Frontier Remastered is coming in the summer of 2021. SaGa Frontier first game out for the PlayStation in 1997, a JRPG that had eight different characters, each of which have their own story, goals, and game endings to play through. The "Free-Form Scenario System" isn't too wildly amazing now, but it's still a pretty uncommon narrative structure for RPGs that aren't wholly open-world.
>> Xxain was very excited about it yesterday, when he made a thread about it.

Bungie boss says the studio has been working on new games for three years
https://www.pcgamer.com/bungie-boss-says-the-studio-has-been-working-on-new-games-for-three-years/
Bungie has been working on several new games for three years now, according to CEO Pete Parsons. He addressed the studio's future games and split with Activision in a wide-ranging interview with Metro. Asked about Bungie's January 2019 split with publisher Activision, which while high-profile was seemingly amicable, Parsons said that the studio's consistent desire is "for creative independence." Obviously that means control of Destiny 2, but Parsons segued into discussing future Bungie games.

Build a theme park with pals in Parkitect's multiplayer update
https://www.pcgamer.com/build-a-theme-park-with-pals-in-parkitects-multiplayer-update/
Ever want to manage a theme park with your friends? Ever dreamed that Rollercoaster Tycoon was multiplayer? Parkitect is getting eight-player cooperative multiplayer on December 8th. Theme park management simulator Parkitect was pretty well-received by genre fans when it launched a couple years ago, and has gotten two DLC packs and a decent bit of free support since. The multiplayer update will be released on the two-year anniversary of the game's launch.

Fallout 76 adds wheelchairs in response to request from disabled player
https://www.pcgamer.com/fallout-76-adds-wheelchairs-in-response-to-request-from-disabled-player/
Just over a month ago, Kelly Leunen posted on the Fallout 76 subreddit that she would like an in-game version of the wheelchair she uses in real life as a mobility aid to keep as a furniture item in her base. "It would make me so happy to have that little piece of me in my creations. And I think a lot of other people would enjoy it too (maybe for when you recreate a hospital/medbay)," she wrote.
A Bethesda community manager saw the request and passed it on, and as of the recent Steel Dawn expansion update wheelchairs can be built at your C.A.M.P. shelter alongside existing furniture items like beds and couches. Leunen built one between two flamingos at her motel-themed base, as she posted on Twitter.

Political management RPG Suzerain gets a December 4 release date
https://www.pcgamer.com/political-management-rpg-suzerain-gets-a-december-4-release-date/
The last four years certainly made it seem like anyone can be president, and with Suzerain by Torpor Games, you can try your hand at it from December 4.
You take the role of President Rayn, the newly-elected leader of a nation that's been through a civil war under a dictator. You're replacing the former president, but his traditionalist government still remains, making your own job that much harder. To make matters worse, the country isn't looking good overall—the economy's in recession, the welfare systems aren't adequately helping your people, and both the military and the law are in dire need of a reform. It sure sounds like a lot, huh. In order to make the decisions you believe are right, you pick cabinet ministers with different ideals and ideas of how to improve things, from matters like healthcare to immigration and diplomacy. Despite everything that's going on, you also have to avoid neglecting your family and take time for yourself to deal with the pressure of leading a nation.

A company owned by the crown prince of Saudi Arabia just became SNK's largest shareholder
https://www.pcgamer.com/a-company-owned-by-the-crown-prince-of-saudi-arabia-just-became-snks-largest-shareholder/
Electronic Gaming Development Company (EGDC) has acquired a 33.3% stake in Japanese game developer SNK, famous for games like The King of Fighters and Samurai Shodown. The transition of shares is valued at 813 million riyals (roughly $223 million / £167 million). Here's where it gets interesting: the EGDC is a subsidiary of The Mohammed bin Salman Foundation ("MiSK"), the crown prince of Saudi Arabia's charitable organisation. The company also plans to buy more shares, raising its ownership of SNK to a whopping 51%.
>> Unlike Xxain, CaptainExplosion wasn't so excited about this when he made his thread.

Pretty much sums up my thoughts. I wouldn't watch it if you really like AMD.

The one interesting thing that Richard from DF does mention in his video is the Super Resolution thing that AMD is working on is not Ai based like DLSS or Direct ML. Most likely it's a temporal super sampling solution found in the consoles.

It could be an improved version of the checkerboard trick that SOny and AMD brought with the PS4Pro. Who knows? 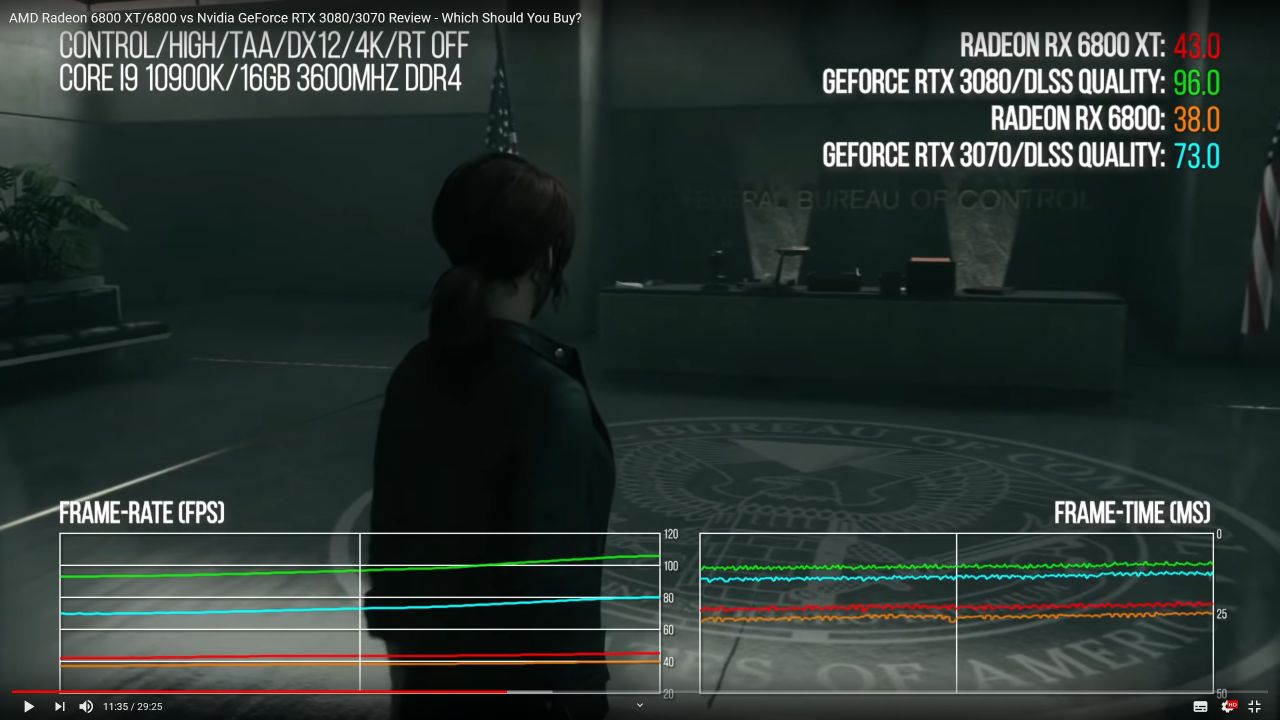 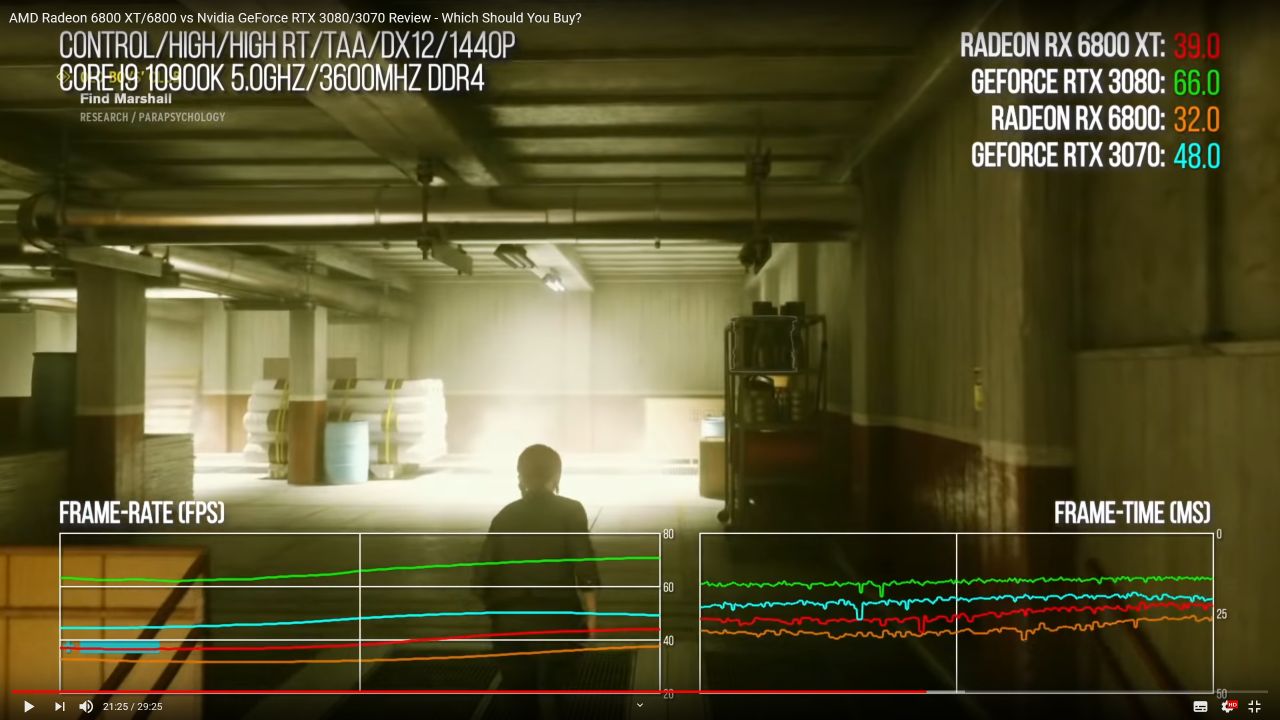 They could have added Control with DLSS quality / RT high to really show off.