Even though they had network problems yesterday due to server overload and the earth then blew up(They had more dollar for dollar sales than Borderlands 2 combined sales on 3 platforms and is 1/3rd the price lol), I setup online VPN so my family and friends could play with me on LAN anyways, and fuck me I'm in love with this genre all over again. THE GAME IS SO FUCKING FUN! It will run on a super wide range of PCs! BUY IT, PLAY IT, LOVE IT!

Here is some game play:

Here is me helping somebody level after he chose the wrong option on Steam and went back down like 7 levels ROFL:

Oh and if you are wondering how it compares to Diablo 3, here is a pretty good article on it:

Find and Compare the Best PC Games
By Kirk Hamilton on September 19, 2012

This game is much more of a beast than its predecessor; in terms of scale and ambition, it's right up there with the biggest names in loot-collection and click-based combat. And so of course, Blizzard's Diablo III looms large over the entirety of Torchlight II. How could it not?

Below, I've catalogued some of the many ways that the two games are different.

As I've been playing, it's been very difficult to evaluate Torchlight II on its own terms, rather than constantly thinking "Oh, so X is different from Diablo III in Y way." Rather than letting all that mess get into my review, I thought I'd write down my impressions of the campaign about 18 hours in, and put them entirely in the context ofDiablo III. Hopefully that will get all the comparisons out of my system.

But let's get this out of the way: If you liked Diablo III, you will almost surely like Torchlight II. Both games feel similar at their core, both have the same randomly generated replayability, and both games are satisfying in the same compulsive, clicky way. Seriously—this doesn't have to be some winner-take-all deathmatch. Both games are fun, and the two can co-exist. That said, if you didn't like Diablo III but have liked past Diablo games,Torchlight is different enough from Blizzard's newest game that it just may be your thing.

yeah i have that on my wishlist since two days ago or so. metascore of 90 atm!

I'll buy this as soon as I'm done with Borderlands. Loved the first Torchlight. I skipped Diablo 3 for T2 because I figured it would be just as good without all the hassles and the large price tag, so I won't have to worry about that compare and contrast feeling.

DO IT! It's more fun with friends! 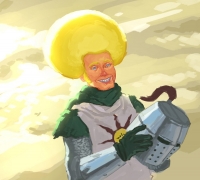 I'm pretty jealous of you guys. This looks amazing.

is this the one made by the ex blizzard guys?

Runic Games was co-founded by the co-founders of Blizzard North, yes.

helping my brother get his levels back due to Steam sync problem hahaha :)