Forums - Music Discussion - Who's the most original band/singer today? 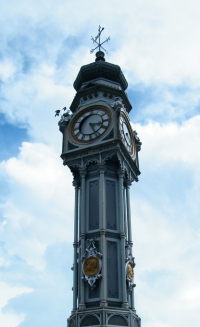 Also, Where do people see appeal in muse? Does everyone like them because of GH3?

Muse/ Silverchair before the last Album.

They're really awesome live, but kinda corny (to me) sounding.

But I don't like them that much, so idk :P

Muse was huge before GH3. In the US "time is running out" was the big hit that got them a lot of play over here. They were probably already big in England, but that was albums ago.

WTH? The Mars Volta, Coheed and Cambria, Primordial, SILVERSUN PICKUPS! Muse are a joke... And I love Muse but come on... Hell, White Stripes. Muse? Ugh. Step it up.

All the bands I listed I believe to be extremely original. I cannot stand Coheed, but their originality is something I do not deny.

Who sounds like David from Silversun? Probably no singer around today. Hell, I have a hard time comparing that band to anyone at all (some people say they are a modern day Smashing Pumpkins but that is only used to explain their relationship to their musical peers; not because the two bands sound similar).

Jack White was really my focus as he sounds extremely original and produces original sounding works. I was afraid saying Jack White may lose some people as more people seem to know the band than his solo work despite the bands breakup.

Mars Volta have no rival today. They are original even to their prior works as of today. They are the definition of originality in my opinion. And I would absolutely Kill for At the Drive-In to reunite. They were original to me with everything they did (I like them far more than Mars Volta, too).

And Primordial have been melding styles of music I am obscure to (for example, Irish folk music) with metal that generally requires the, "death growl" approach yet with the singer uses almost exclusive clean vocals.

These bands murder a Katy Perry. And I am a huge Katy Perry fan.

I could have used Tech N9ne for rap because he is the most original rapper out there... but again, I think that would be going over people's heads in this topic. I was not expecting Katy Perry or Muse to have that kind of following. Good music? Absolutely. Original? Not exactly.