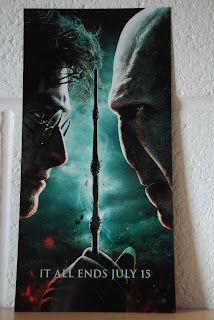 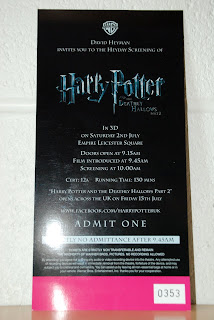 I’ve just returned from a pre-screening of Harry Potter and the Deathly Hallows: Part 2 in London. The UK film scene can often be like a big family, and is quite interconnected, so clients, talent, and friends know friends etc, and I've a friend, who works for a script agent, works with Heydey films, and invited me to the preview; yes, I know how bloody lucky I am. I walk under a lucky star, blah de blah, but I think it helps to have great friends in the industry who enjoy sharing and geeking out!

So I’m not going to go into major detail until later. What’s the use of that? Any true fan won’t want spoilers, and it makes me feel like I’m gloating. I will, most definitely work on my analysis, and I’ll write something resembling a review here so you have a taste of my reactions and what’s to come. 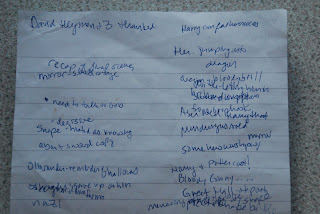 It began in Leicester Square at 9am, where we handed over our gorgeous tickets (see above), and were escorted into open seating.  There was not a mad rush at all; everyone was just grateful to be there, very patient and quite fun.  Plus there was a lot of room, as it was at The Empire cinema in Leicester Square, in one of the largest screens I’ve ever visited.
Once all were gathered, 3D glasses on, note pad and pen poised  (pictures of my notes to the right; they’re rather a mess as I was writing in the dark!), David Heyman and the three other execs on Heyday Films came out to thunderous applause.  It was the family and friends/Heyday Film Partners day, so there was a lot of support for him and the team as there were many friends and co-workers in the audience. He took the mic, thanked everyone for coming, and for supporting him and the story for the past ten years.  He also announced “I don’t see this as the beginning of the end; it’s the end of the beginning.” Which is rather appropriate for a tiny production house that had made nothing close to the realm of Harry Potter prior to this worldwide phenomenon franchise, but it is poised to make huge strides in filmmaking, and certainly in British filmmaking, in the future. 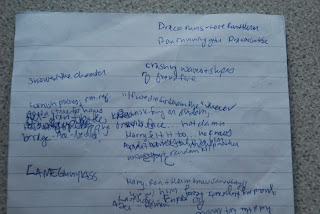 Heyman was brief, grateful, and humble, then quickly moved aside for the film to begin.
I shall not discuss it here.
I will, however, give a quick review.
It was bloody brilliant. Remember my post about Black Swan being a good film but a bad movie? I know Harry Potter is a different kettle of fish entirely, but I’d say it succeeded in being both a good film and a good movie. Including DH: Part 1, I think this film has been the most cinematically beautiful; the performances were grand with many characters, Hermione and Snape in particular, coming into their own, with the only exception in my mind being Ginny. I’m sorry; I’m just not going to be a fan. I’m sure she’s a lovely person, but she just does not fit the part for me, her acting seems quite forced be it down to skill or script, and the chemistry between Harry and Ginny just did not develop, unlike Ron and Hermione’s whose has flourished and grown naturally…. theirs… the kiss… guys… seriously… whoops and hollers; it was bang on lovely, sweet, passionate, giggly…. Lovely.
90% of the film was satisfying, heart-wrenching, funny, poignant, terrifying, suspenseful, teary, correct in spirit to the novel, visual depictions bang on (the protective spells, the dragon, the piece of Voldemort in the Heavenly King’s Cross… wow). Yes, there was 10% that I will wonder about, some continuity issues and questions about why they did that the way that they did, and maybe 2% that I’m really confused/angry/disappointed about (HERO WORSHIP! Where the heck was it? Final battle?! I can’t continue here; it was 98% great, but 2% something was horrifically wrong).
Overall, however, it was a wonderful conclusion to a huge chapter of popular culture, film history, and my own personal life as well as it began when I was a freshman in College in Virginia, and just a Harry Potter fan, and has now ended with me as Head of Development for a production company in the UK, finishing up a PhD in event film adaptation studying Harry Potter amongst other things, and incorporating brilliant, epic, phenomenal storytelling from book to screen in my daily life. It’s been with me on the journey.
More soon; I may respond to some stuff in comments if you want, but for the most part, I try to steer away from reviews and whatnot before seeing a film so I can make my own opinions clearly without any influence from another, so I’ll more than likely let you do the same J
Sigh. What to do for two more weeks until I can see it again at LeakyCon? And then again…and again…

Hint about what's to come, interesting discussion on Harry's ability to 'feel' the other horcruxes... and I've seen the comments; I'll respond to some tomorrow or Monday as they pose some neat questions. I'm moving in the morning tomorrow, then on a train to Cardiff for a few days, so forgive me if my responses aren't immediate :)

You should probably change your avatar though, your not worthy of being a Harry Potter fan after the Emma Watson vs Natalie Portman incident of 2010. You thought I would forget, you are mistaken.

*change your avatar to hermione, then we will have a talk, girl to girl*

Bring it on bitch.

Heh, if it follows the book, then yes it can.

i totally loved the first part. i can't wait to watch this one. i agree with the reviwer that the chemestry btwn harry and ginny turned out horrible in the films so far. but overall with the exception of half-blodd most of the films have been ok or great.

Its not the film makers fault puberty hit whoever plays ginny like a ton of bricks and that Daniel remained short...at 5 ft 5 he is one of the shorterst actors of his age (if he was taller than ginny there would automatically be better chemistry)