Yep. Seems like it. The pc version will come before most likely.

I certainly hope so.  The more big-name PC exclusives that are consolized, the better. 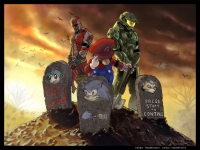 I guess this will be a good thing. But i never played any diablo game but maybe i get interested if it comes out on consoles.

If controls are ok, I'll get it.

While it's good to have more people playing my favorite games, your use of the term "consolized" is concerning. If that involves any sort of downgrade to the PC version, I obviously don't want that. However, if it's like The Witcher 2 where they make the PC version first and foremost then throw the consoles a port 7 months later which runs as well as it can on consoles but doesn't hurt the PC experience, great.

how is torchlight on 360? cause that's more or less what you'll end up with control wise ^^

new gen consoles should just come bundled with a set of keyboard/mouse.

Could be interesting to see on the console. Gives hope that it won't be any form of P2P at least.