Wow. Imagine if this is true. 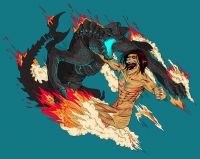 Yeah it's $15 a year for the Platinum membership, but not all Premium members were getting this offer; the users getting it were mostly those with no PS3 purchases registered in their system

yeah, I'm gunna talk to this girl I know who manages GS and see if I can get one.

Sounds like it's gonna be a good time for me to get a slim, my non BC 80 GB phat consumes a lot of energy and it gets hot easily during the afternoon (the temp is like 97°F or 37° in my country :P ), So this might be a nice change :D

I'd think next year would the true PS3 slim release,  I'm not totally sure what this model has that differentiates itself from the other PS3's, but its probably just got a bigger hard drive, I don't see Sony adding anythng special

When they change the hard drive they just change the letter or last number like cech-Z00XY, changing either x or y. The same exact hardware with differing drives usually changes the Y and has the same X.

This one has a new Z, which is exactly what changed from phat to slim.

I don't know what it will have, but in order for them to cut the price to $200 they will have either stripped out some features or be taking a ~$50 loss per machine.