Some people think it's okay to eat fast food as long as you excercise regularly. Those people don't know. 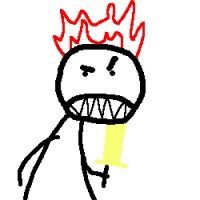 Or stupid enough not to ask questions when they see things like Supersize Me.

Fast food isn't good for you but it isn't the devil it's made out to be either (well except the ridiculous things like the double down).

I can't imagine many people like that existing considering how heavily mentioned this stuff is... the government and pretty much everybody else goes way out of the way to try and explain this stuff to people.

Haha the double down... man I couldn't believe that existed the first time I saw the commercial... that and the weird almost sexual way the one guy was referring to the chicken... I like how they refer to it as a sandwhich... you need bread!

I wouldn't eat one of those for free.

I tried to eat one once and failed...bad.  A buddy ate two on a dare (one grilled, one fried) and you could hear his heart screaming.

Yeah... i tried that once with a Baconator... didn't even get like halfway through before i threw the thing out.

Another time my friend and I tried to eat one of those hungryman "A pound of food!" meals.

Took me like a week to get through it.  This reminds me I gotta find a solution to my current problem of my new job being in the middle of nowhere with nothing but an Arbys, Wendys and non-food selling target in the area.  Well and a Dollar tree... good luck finding healthy food there.

Actually, the government itself does not really do anything to fight fast food. Why would they?

It's a question of money.

Except... the government does.

The government spends hundreds of millions of dollars to put out healthy eating commericals and other campaigns.  I mean, who else do you think puts that stuff out?

If people actually did care, that money would still be spent.  It'd just be spent on heatlhy fast food.   I mean hell, if even a few more people cared do you know how easy it'd be to start a vegan/vegitarian fast food chain that offered healthy quick food?

I wanted to do that once, before I realized it'd probably just fail because burgers taste better.

True, I eat them all the time, but I mean, convincing other people too... probably a tough sell.

Honestly I think the vegetarian hotdogs are leagues above regular hotdogs.

Chicken Nuggets too... just because you avoid the problem of "weird hardness".