Forums - Sales Discussion - Android and the Iphone are a threat to Sony and Nintendo good reason why !

We might not care about gaming with smartphone but for casual who only wants short mobile games those machines remove any point in having DS or PSP as separate system.

I agree. Sony is going to take same strategy with PS4. It's going to run on either Linux or Windows and Sony is going to make all the PS4 games available to all Linux/Windows users too. It's a massive win for Sony.

um.. not all Android Phones cost that even the fact you can get a full android OS phone for less than $200.00 and that's without needing a 2 year contract.

so selling 50+ million handhelds is now a failure! people like to bring up PSP game's don't sell and that their crap. , but yet those very same game's are pirated to hell an back, why pirate them if people think their crap!, because they can?. if the game's were that bad why pirate them at all? or is the game's for the PSP good and many gamer's want them but do not want to pay for the game's?  but yet you here many say that the PSP game's their crap and no one want's them. the same thing happened to the dreamcast Piracy was also a big problem the system was top notch, it's just pretty much every game that was made for the dream cast was pirated. the same happened to the PSP. pretty much any UMD game that came out for the PSP the content's would get dumped straight to the internet as to say it was "backup"

for the record this is the android.

I don't get why so many people think Nintendo is going into the mobile phone business or even microcomputer business.

Consoles != PC so would would a portable console = a portable a PC?... well the PS3 is kind of PCish though, but it's totally not up to the same stuff a PC is.

well that's the first G1 an just one of the 36+ android OS based devices..

I don't think myself that Nintendo would go into the cellphone or Microcomputer business as you would say.

since they do not have to be since other companies have done it for them. did you know the Gameboy Advance an Advance SP had a phone adapter! 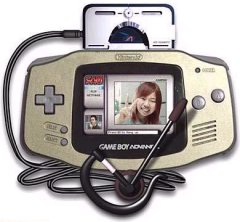 Got a Nintendo GameBoy Advance? Instead of a videogame cartridge, clip on a Campho Advance from Digital Act, and turn your handheld gaming device into a videophone - complete with digital camera, microphone and earpiece.

For now, connections are via a regular phone jack - broadband and wireless connections are in the works. The GameBoy display streams live video of the person on the other end of the line, with your own image in a corner of the display.

Naturally, the other person requires a similar setup. And, for now, you both need to live in Japan, as developers aren't saying when (or if) they'll sell the Campho Advance overseas.

Iphone is threat to PSP alright, but Android is the bread and butter of Sony Ericsson, how can Sony a threat to Sony?

Nintendo on ther other hand will still sell trillions of their 3DS, under 10 children playing Pokemons 3D are very very unlikely to have a handphone, dont u think?

Nintendo go buy Palm. http://www.engadget.com/2010/04/11/bloomberg-palm-is-up-for-sale/
Slap WebOS on the 3ds sell the unlocked version as you normally would and the locked version through as many carriers as possible.

How many games have outsold Nintendo's big titles, like Mario and Pokemon?

They are growing, but are they a threat to Nintendo, well I don't believe so, as we can see from continued DS sales, even now in its last few years.  So even if it grows larger than Nintendo in sales and hardware, will it in any way affect Nintendo?  All signs point to no, at worst it'll just be another split in the market.

Sorry stick, you know my long standing policy of not taking any bets, I think the whole bet thing is stupid

But that still doesn't expalin how its a threat to Nintendo, all it does is split the market, ok, how does that hurt Nintendo's bottom line, even with "explosive growth of the smartphone gaming", DS is still chugging along strong, even now after the 3DS has been announced