Given that the release date of Anno 1800 is April 16th, in less than 20 days, I guess the whole "we won't do that again" statement from Epic about the Metro incident was, as some expected, nothing more than words. Of course, Anno is a much smaller game, so neither Epic nor Ubi will face the backwash.

Still, I do take note of this.

I can't say I'm surprised. Epic make it sound like they had a smoking gun, and that they didn't want to have to "shoot" again, despite the fact that they have and wanted to.

That being said, I'm practically done with Ubisoft at this point. Their buggy/"demanding" ports and higher prices for what they sell at launch, along with this debacle has me really just not wanting to support them in the near or far future. They've hardly cared for PC gamers interests for years. They never even apologized for them citing the entire platform for piracy years back, so I can't say I've any empathy for them, if they were to ever hit a wall anytime soon.

I was originally looking to see how Anno would turn out, since the last one was received poorly and rather watered down, but seeing as how this has happened, I went out and bought Tropico 6 instead.

I won't be hearded into pre-ordering it just for the 'privilige' of being able to play it on Steam.

Yeah I think its pretty scummy of them doing such.

This is one on the list for me to buy when its like dirt cheap on Uplay.

Edit: Unless the game still comes out on Steam a year later.

So much for "we don't want to do this again": 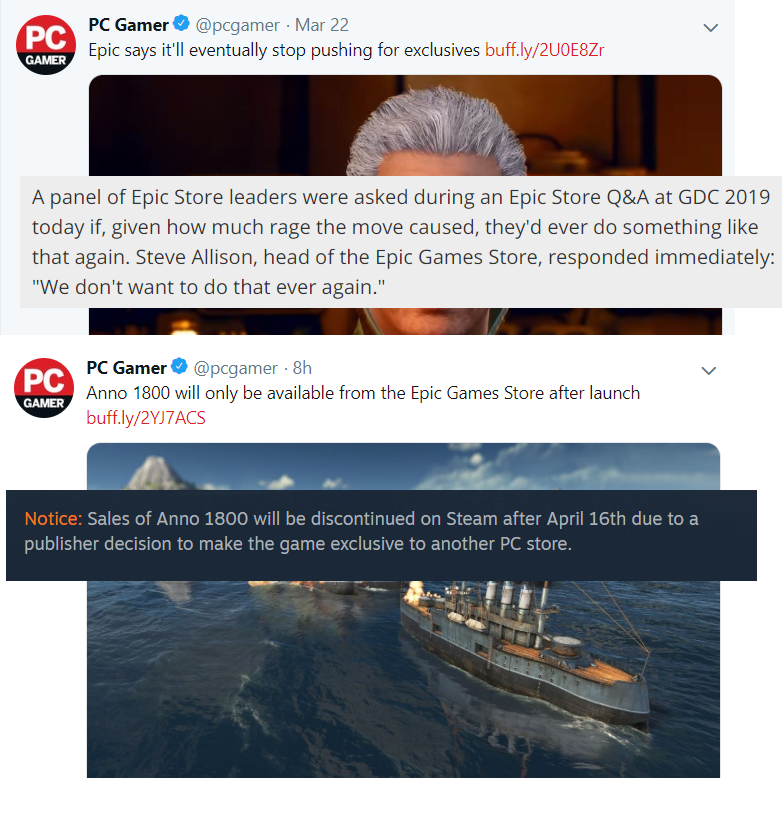 Good news. My wallet is partnering up with only Steam.

I don't think this is a big loss anyway, never really liked how Ubisoft viewed and treated the PC community... And Anno isn't exactly a massive franchise at any rate.

They never really backtracked or decided to cite themselves as being wrong for the previous talks of the "majority" of PC gamers being pirates. The past few years of talks with PC gaming and how they "love" it, yet they slap on 4 layers of DRM across multiple games, pull this and force console parity with their ports, while also asking for a higher price, either in US or EU (where the hell is my GBP support Ubi?).

With this recent move, it's become so very obvious that they truly see and regard PC gaming ultimately as second class. They don't really care what state their games launch in over there either, going by recent patch notes for TD2.

I honestly wouldn't bat an eye, nor shed a tear if Ubisoft was bought out or crippled within a few years.