Forums - Nintendo Discussion - Nintendoland: What Franchises will be represented?

So, now that I've had some time to relax and distance myself from Nintendo's E3 conference, I've come to realize that Nintendoland will probably be a fun little pack in for the Wii U, it was just definetly not the way to end that conference.  It's not the games fault though.  So the game's that are playable at E3 are:

And the folks at Destructoid atleast seem to be having fun with them (http://www.destructoid.com/e3-quick-impressions-of-the-nintendo-land-games-228834.phtml)

That's 5 franchises out of 12 though, so what's left?  I'm thinking Metroid, Kid Icarus, Mario, Kirby and Wario for sure, but that would still leave 3 franchises.  What do you think we will see? Love to see Mother.  I mean, we won't, but I'ld love to see it.

Edit:  Just realized that I left out Star Fox and Pokemon, and that would be 12.

Metroid was definitely pictured. One of the gates in that plaza they showed had Samus' helmet on it.

that it is nice... maybe some flying fight for Kid icarus too... 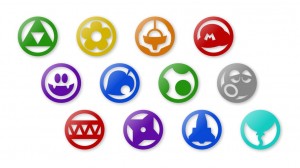 Those are all the Symbols

Orange Wathever it is - No idea

Ninja Star - That minigame they showed

I already like the franchises highlighted, and the symbols they represent.
That is game i'm looking forward to trying out.

The Octopus is probably Game & Watch

I had no idea what the face was untill I was looking everything over and saw that Luigi's Mansion wasn't anywhere - it has to be Lugi's Mansion by defualt.

The Ninja Star game is based off of the Japanese only game Nazo no Murasme-jō.

That would be all of them then - surprised we have no Kirby, Pokemon, or Kid Icarus.  Guess we have to wait for Nintendoland 2, lol.

Wow, you're right, it is Samus Helmet... I was looking at just that middle funnel-like thing.