Yes, but the VR recognition software is second to few on this thing (modeled after win7 VR software) so I suspect that wouldn't be a problem.

Then add the dedicated processor as well as some pretty solid software, and problem solved.

I wouldn't want to talk over my games SFX and I dont play with the sound loud. I'd still need to be louder and more distinct. I think VR in game will be glitchy. I think VR will be mainly used for menus.

How would VR be for people moving a lot? Like if you were out of breath. Just moving a little and talking even if you arent getting tired and exhausted you can still be winded and have some pants between words.

I live in a 3 bedroom ranch house. The furnace is in the middle of the house. Basically in between the living room and bedrooms. It's loud. I always need to turn up my tv to hear it when its on. I'd need to scream for VR to pick it up over the furnace and TV. If my family is doing laundry than thats another thing that NATAL would pick up since the washer and dryer are immediatly in the next room. I don't think VR will be a good substitute for buttons.

The VR recognition software from windows 7 is very good. I doubt you would have a problem.

I know iv'e said it before I will say it again. Natal is a fantastic device that will enhance electronic UI for humanity. For the gaming of the 360 however it will not be so massive. Don't get me wrong we are going to see some fantastic features from from this thing. Anyone remember Johnny Lee head tracking?

Where it's weak point is though is high amount of changing fidelity. It sucks at input fidelity. All the demos so far pretty much show poor fidelity. The problem with Natal that the Remote/Wands don't suffer is that input scale is related to distance from camera. The farther you get the less space change occurs on the cameras buffer. The closer you get the smaller changes cause great changes. It's like holding your thumb to 1cm away and only seeing half the world. If you move your thumb just a tad more over your eye it blocks lot's of the world. Now hold your thumb out as far as you can.The first difference is that the relative size is now MUCH smaller and the motion of that tad of movement is now MUCH smaller.

This creates a consistent fidelity problem in gaming. I'm sure MS has thought about it. As have I. You could do a calibration. This would somewhat work, but would require an exacting distance. This seems like a bad idea. You can do constant calibrations, but theres no guarantee that it will work well. Notice how the WiiremoteM+ in some games oddly requires the remote held in certain angles at certain times. Sure it tries to keep up and calibrate often, but it still needs reset time. This of course depends on the game and how well it's hidden. So now not are we calibrating motion size, but we need to calibrate distance and angle.

Natal will be an awesome tool, but it's no serious game controller. Though could you imagine playing a flight sim and doing head tilts to look out different angles of the cock pit. Total bad ass. Natal has showed that'sit's a broad motion input system, not a high fidelity input system like a classic controller or Wiiremote.

That is a very good point, I sure hope they fix this problem. 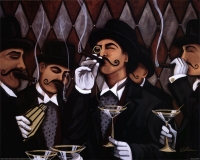 Traitors, I thought we all hated motion controls because it attracts Casuals.