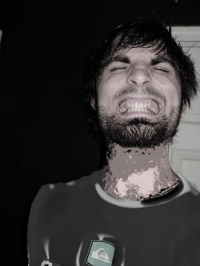 Fallout 3 looks really boring to me..

my issue is they are giving in to racists and going overboard.  Its africa, there are going to be black people.

I just wanted to see some more Gears of War 2 footage. I guess I'll have to wait for GameTrailers and IGN to update! =P

i didnt include some things that didnt interest me or i just didnt have any opinion on.  gears is one that just doesnt interest me *shrug*.

While I despise political correctness, the game looks great enough that it doesn't particularly bother me. Forget the political BS, dude, and just enjoy the game.

Who cares?  It is a game about killing zombies(sorta).  Just have fun.  Maybe they should have made them green.

it bugged me what they did.  it legitimized the complaints when there was no reason to.

Im not much of a shooter fan in the first place, so i dont get into many of them.

I still can't get over the crazy amount of pop-ins that fable had, you can't really see a lot on screen at once and to have half of the trees pop-in when you get within 20feet is just wrong. The stuff going on with the 4 people in the house was very odd aswell, it looked and felt too much like the sims.