The only reason I can think of for EVGA not looking elsewhere is the board or the CEO are delusional enough to believe that they are so important and  Nvidia's need for them is so strong that they don't need to explore other options since Nvidia will obviously offer them way better terms than anyone else could to come back.

Could be but I think it comes down to them not wanting to be in the GPU space all together. I think if they wanted to continue in the GPU space, they would have stayed Nvidia regardless of all that has come out because Nvidia has 80% of the total GPU market share of which Evga sold around 40% of the NA GPU sales. Them going AMD which barely can keep 20% of the total GPU market share and Intel which is less than 1% probably won't do them any good. It's like going from a high volume, low margin with Nvidia to going to low volume low margin with AMD.

I think it's good to remember that no one buys Nvidia because EVGA, people buy EVGA because Nvidia first and brand second and I think what EVGA has done as what Linus said is keep the gate open in case they do want to come back. Because the last thing any company wants is to be like XFX that really pissed off Nvidia and now is battling for scraps by being forced to go exclusively AMD.

I agree your post makes more sense, my concern is the mixed messaging, I can see them not wanting to be in the GPU space altogether even though it doesn't leave them with much else, but companies in that position usually either sell the whole business or if they see the rest of the business being the way forward they divest the part they no longer care about, in this case it seems to be neither option since they don't seem interested in trying to promote their value, instead they seem content to sit in some kind of weird holding pattern without any real clarity as to why, so in the end just like my life it is for the future to decide whether or not we see any form of lucidity regarding the matters of today or in my case lucidity regarding any day past or present.

The fact that instead of my usual off the cuff replies, I have given almost 3 seconds of thought to this should show you I'm serious when i tell you that Sony is behind this, also saying this info comes from a source who is handsome and he/she/its VGChartz profile has 3 letters and two numbers in it should be enough to verify he/ she/ its credentials as someone who is not just a central figure in the world of rumour and innuendo but is the King of outright lying meaning he/she/it is never wrong since contrary to popular belief history isn't written by the winners but by the best liars.

I have digressed enough he/she/it says Sony have set this up to demonstrate that NVidia has to much power and to show that while at the moment  Microsoft may be  NVidia minus the N V d one i and an a, the day Microsoft own Activision/Blizzard they will gain all those missing letters thus they can become NVidia and so are to powerful.

Because Nvidia is squeezeing all the profits out of the AIB's hands. 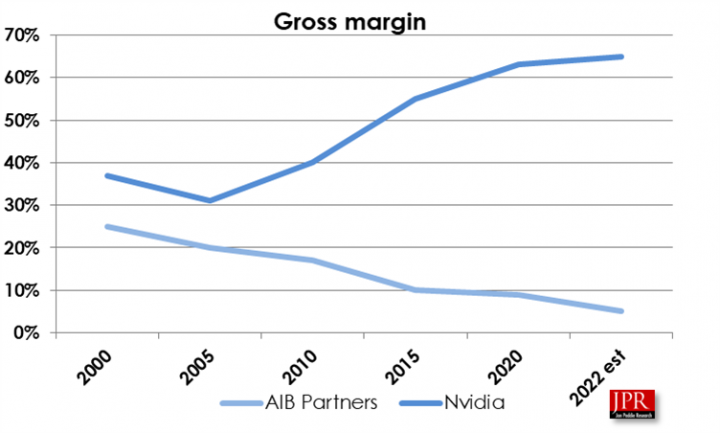 Then theres how they treat them, which isnt great.

Nvidia has noted a loss of like 1,3bn, written off, from over production.
So they are stuck with alot of "dies" that have to be mase into graphics cards atm.
They are "forceing" AIB to buy old 30xx dies for GPUs, while knowing that Miners are about to go crazy selling used 30xx series cards for little to nothing. Apparently Nvidia are sitting on 4000 series cards, and wont really hard launch the 4000 series until April 2023.
They want to get rid of overstock.

What do you do, when suddenly it doesnt pay mine anymore, because of engery prices, and the changes to etherium?
As a miner, you recoup whatever you can, by selling your GPU at whatever price you can get for it.

So whats gonna happend? Well 3080's are about to hit like 300-350$ for consumers, because of overstock and miners reselling.

Now Nvidia is forceing AIBs to buy old 30xx series gpu dies, to get a promis of future 40xx series dies, at old prices.
This means every GPU they sell, they will be loseing $ selling it.

Ontop of all that, Nvidia have their own founders editions, that they now sell at MSRP or lower.
Screwing over AIBs, that work with nvidia.

Nvidia makeing their own cards doesnt have a middle man, so they can afford lower prices than AIBs can compete with.
Ei. Nvidia is forceing the overstock issues, and minimiseing their own losses, at the cost of their "partners".

tons of other stuff.... its gonna get grim.
Lots of AIBs will probably go under from this, while Nvidia makes off with minimal losses.

End of the day, theres rumors of Nvidia trying to do what 3DFX did.
Ei. cut out the middle man (AIBs) and go onto makeing their own cards and selling them directly as well.

EVGA said, this isnt for us, we re bowing out.
We make more money selling PSU's and Motherboards, so thats gonna be our future.

Their CEO isnt retireing, he likes his work atm.
Also they where well run, so they dont have financial woes to worry about.
He values loyalty alot, so he would feel like working with another company than nvidia, would be disloyal.
He rather not make GPUs anymore, if Nvidia is screwing them over.

So whats gonna happend, is they are just gonna downsize, fire alot of workers, and focus on whats easier and more profitable for them.
Ei. Motherbaords & PSU's.

78% of their revenue was GPUs, but it was apparently less than 1/3'rd of the company's profit margins.
GPUs where becomeing bad bussiness for them, and apparently Nvidia was about to make it worse, and they are hard to work with.
Evga choose to just say "okay, this is it, this is the line we wont cross"

Evga apparently over years had talks with nvidia about their issues, and where always just ignored.
This is what happends, when you dont value a partner that works with you.

~78% of revenue.
Also apparently less than 1/3 of profit was from GPUs.

Nvidia is about to make selling GPUs costly for AIBs.
Ei. they have contracts to honor, when they buy dies at x cost, they sell that onto the AIBs and then some.
But with the Mineing crash of etherium, tons of high end gpus are about to flood the market.
That ontop of Nvidia "over-ordering", has lead to a situtaion, where there are too many GPUs currently in circulation.

You can launch 4000 series, and write off billions..... or you can delay 4000 series, soft launch it only, say a few high end cards (with performance above current gens), while you wait for stock of old cards to sell off over the next 6months+ time.

So thats what their gonna do..... ofc they are gonna make their AIBs buy old dies, at old prices (so they dont eat a loss vs what they paid in contract for them), at a time when the market is gonna be flooded with them. AIBs are gonna lose money selling old gen cards soon, while Nvidia with founders editions competes against them as well (while being able to have lower margins).

For those wondering how big was EVGA?

Well apparently in the US, their over 40% of nvidia total sales of GPUs.

Thats a big part of the chain, suddenly disappearing.... I know other AIBs will step in to fill the void, but theres still gonna be a abit of transition time.

Last edited by JRPGfan - 6 days ago