I just posted my concern based on what others are saying on the internet, I am not just making this up. Maybe you are right will wait and see. People are saying the opposite and saying its more than just Visual Story games etc.

Also Don doesn't live with me, he has no idea what I own and not owned. I shrug it off and laugh as I find it funny how some people think they know you more then you know yourself. He probably thinks all I have is an Xbox.

Your comparison to Halo is very strange. Horizon isn't a master piece and didn't win any GOTY that actually hold weight and didn't even score over a 90 on meta (Currently on a 89) so why are we comparing it to an IP that has on multiple occasions hit over a 90 meta, sold 10m on multiple occasions and won its fair share of awards throughout its history..? That's why I am bringing up Days Gone because Days Gone could possibly sell 10m copies same as Horizon so you might as well include that game as well in your comparison. Uncharted is an IP that has finished and even in its prime wasn't bigger than Halo last gen. TLOU is Sony's Juggernaut which has potential but it takes more than 1 game to prove to be bigger. Halo has a monster following, something you underestimate big time.

If you would like to include Halo 3 ODST that would only favour my debate.

Doesn't look like we will agree on this and I will disagree not including Reach in the convo. Its not out of disrespect but I feel that game shouldn't be brushed aside like you are doing.

Reach is a direct prequel. It misses Master Chief but so do other games/movies also miss main characters and aren't spin-offs. Star Wars is an example.

No idea why that number is so important for you. Halo team was split to work on a spin-off and one mainline game. ODST was the spin-off, Reach was the mainline game. And Azzanation and I aren't the only Halo players who think so.

I'm not saying you are making this up. I am saying that your understanding is misinformed. Just because a lot of youtubers are saying the same thing doesn't mean they are right. There are thousands of ppl telling you not to get vaccinations because it will kill you, or give you autism or something. That doesn't make them right.

Yes, the censorship policy did indeed hit DOA and Senran Kagura in some ways, but these are the outliers to what we know is mainly being censored, VNs. And that would make sense since that is the genre that pushes sexualisation of characters (especially female) are lot more than any other.

That said, I did indeed take the time to watch the 2 vids you linked.

The 1st covers all the info better than the previous vid you linked. Granted, they still think DMC5 was a censorship issue, when it was most likely not. Their point seems to be that censorship sucks, which is fine.

the 2nd vid is outdated, considering we now know better what the censorship covers (his vid was well before I believe).

Look, if you want to believe these guys and use them as your source for info, then fine. But we know why Sony is censoring games. We know what the subject matter concerned is. We know that it affects ALL regions. We know that the guidelines have not been pushed onto any AAA with a high selling projection, as of yet.

And I, like many other ppl on this board, are confident it will have little to no impact on the PS5. why would it? the games that are actually moving consoles and selling well are not trying to sexualise underage looking girls.

Unless he was lying in other threads he already confessed to not own a PS4 (can't be sure about PS3 though) and that he played a lot of PS games on friends and relatives house. But have failed to ever show his tag so anyone can check his trophies on the several games he claim to have played a lot to give bad mouth. And you can see that he said I don't know him, not that he have a PS4.

He have claimed to have Xboxes and some Nintendo consoles in the past, but no PS4 and perhaps no PS3. I could also make a bet that he haven't bought a game that haven't released on PS4 due to Sony censorship as that is recent and will affect a few number of VNs as you pointed and from what I remember he isn't a big upholder of japanese games.

So I may not know him, but I know his arguments. Like the one of Halo 5 being the biggest there is because MS gave a very spinned PR including the price of the 500 boxes with the game (hint they never released the total sold games) and claim that it have at least 50% digital attach ratio to inflate the sales of tracked on NPD and others. He will also claim that there is more Xbox Gold subs than PSN+ due to also bad PR from MS spining their total XBL subs (silver included) being marginally higher than PS+ subs (but of course less than half of total PS subs, with also PS+ being about twice as big as Gold). Plus the odd belief that if X1 2.5x more Halo 5 would have sold 2.5x more, which is very easy to see how wrong is (like using the example of Mario Kart 8 on WiiU that sold about 50% attach ratio so if launched on Wii should have sold about 50M), attach ratios aren't constantly kept with increasing userbase, Zelda BotW was outselling Switch total during the first few months and no one would expect BotW2 to have over 100% attach ratio.

1st point - Well when you say things like we have seen censorship in games like DOA is basically my point in the matter. How far will it go next gen? Should I take your personal point on the matter or several on social media and with some actual games being affected. DOA and Senran are games I personally don't play so censoring wont affect me but the point is that it affects those games on PS4 and not on other platforms bothers me. 2nd Video I barely watch, just another Youtuber I saw when picking out the first video. There is a big voice out there atm with censorship and what bothers me even more is Sony hasn't come out to correct the matter (Yet or from what I know of) If what you are saying is true than Sony needs to voice a PR meeting and explain there future direction alittle better to stop the spinning. If Sony don't say anything about it than that leads to the other side of things like they don't care and they will stick to it.

Last point - is 100% correct. Don thinks I actually have to buy a PS4 to actually play one or have one in the house. Its assumptions and accusations I tend to stay out of.

It does matter. - Bungie made two Spin-offs, ODST and Reach as they were 'done' with the original trilogy. - Microsoft then set 343i to make the next trilogy. - Any games outside of those trilogies are "spin-offs".

Plus Halo: Reach is based upon one of the franchises spin-off novels.

The fact that Reach is a prequel only further reinforces my argument that it sits outside of the original trilogy story arcs, thus making it a spin-off.

Halo Wars is marketed towards the Halo audience. - It even has Halo in it's name... Can't make this stuff up.

Adding ODST doesn't really favour you at all... It only just further reinforces the shifting of the goal post.

Here is a chart of Halo games and their rate of sales in order of game releases... As we see from the peak of Halo 3, there is mathematically, which is represented graphically... A decline in the series... We have some highs, some lows, but overall the trend is lower sales.

Whether you agree or disagree is entirely redundant anyway, it's represented here: 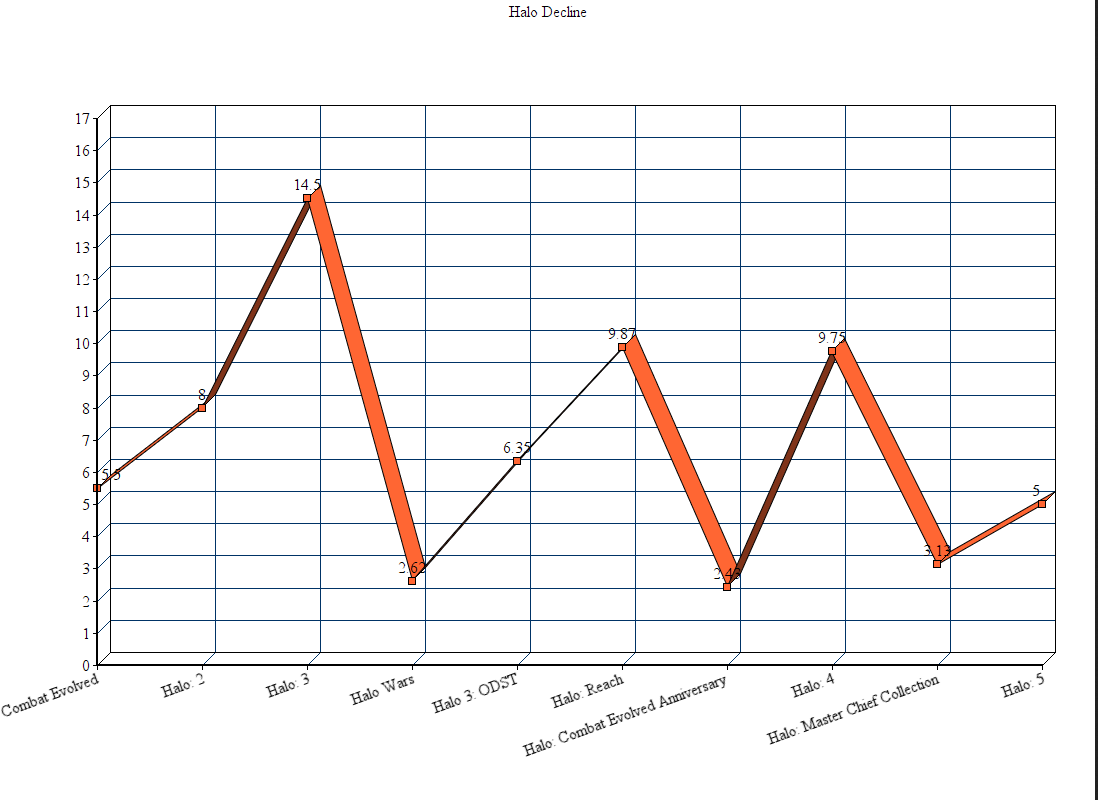 I am also not brushing Reach aside, I already stated it is the best selling spin-off title in the franchise, which is actually a damn good achievement.
That doesn't mean Infinite can't match or exceed Halo 3's sales though, that game needs to be judged on it's own merits... It will be interesting either way, I feel Halo as a brand just doesn't have the same industry-wide excitement it once had... But then again, neither does Call of Duty and that does well every year.

All 6 games in the two trilogies all include Master Chief.

I am also a Halo gamer, I own every single game release on every single platform those games ever released on, not sure how that statement of yours bring any relevancy or legitimacy to your arguments with this discussion, either way...

DOA and Senran were censored for the same reasons as every other game was. Sony isn't going to 'correct' the matter because this is part of their new guidelines for their platforms going forward. Any spinning taking place on what the censorship is about is coming form ppl who either don't fully understand what has already been explained, or are purposely trying to spin it to suit their own viewpoints.

Perhaps they could be more open about it but its a platform guidelines, but that is clearly something between them and publishers. But sure, stopping this miscommunication about the policies from others would definitely be beneficial.

Since PS4 up until couple of months didn't have any of the censorship debate, then it wasn't preventing him from buying it. So that is obviously no reason that will stop him from buying PS5 even if he pretends it is here just to score a point against Sony.

And as you saw. I wasn't pretending to know him better than himself. I was factually right on what I said and he couldn't refute. Also couldn't put his PSN ID to show the plenty of PS4 games he have claimed to play.

No one have to buy a PS4 to play PS4 exclusives. But someone that plays so many of its exclusive would likely buy one since that is offering value. Plus someone that plays so many games on the system would likely have an ID. Still it seems it's just me being crazy and not knowing his arguments that is repeated every thread that have any financials or PS doing better than Xbox.

Funny how some act like this is only Sony's 2nd rodeo. This will be their 5th, with them winning 3 out of 4 of their past ones and coming in a close 2nd, with ~86M units sold, in their weakest. They know what they're doing. Market to the hardcore/early adopters first, then to the average gamer once the price hits a more mass market one.