Forums - Politics Discussion - A brilliant breakdown of the current state of journalism and fake news.

I thought you were joking as well, bc CNN is known as the worst culprit of misinformation when it comes to liberal news stations.

OT:  I completely agree with you, OP. I seriously loathe the media. No one is unbiased; they twist any story that is even remotely political to meet their agenda and increase viewership and money. It’s beyond disappointing; it’s disgusting and pathetic at this point. If there was any justice, there would be rules and the potential for repercussions for lying and manipulating the truth in the news. I’ll keep dreaming.

Exactly this. I’m not a Trump supporter and didn’t vote for him, but seeing every freakin news outlet beside Fox News team up against Trump has almost made me feel like I want to defend him—like I’ve felt when I’ve seen someone being bullied. There’s not a person in the world that is without a single redeeming quality, but the media would lead you to believe otherwise about Trump. I mean really? Are these people that pathetic and juvenile? I’ve watched one or two of Trump’s speeches early on in his presidency and walked away feeling like he said a lot of fair and even positive things. Said to myself, “I don’t see how anyone can find much fault in that speech.” Sure enough, I turn to the news, and they were absolutely lambasting him.

Fox does the same thing with liberal/Democrat politicians, which is equally pathetic; but, they’re just one station. It’s just different when there’s a ganging-up/bullying situation.

And this is not even hyperbole. AFAIK, there is no news outlet, whether mainstream or alternative, that maintains consistent integrity in their reporting. Every once in a while, they report something with relatively little bias, but it's followed by a slew of heavily spun, slanted, or even outright dishonest articles.

I didn't vote for him either and this brings me back to another thread about people who are obviously far left acting indignant when they are presented with facts. Makes me want to make my Facebook profile picture  ofTrump. And post far right memes out of spite. Their go to now is calling everyone Russian trolls and trumpanzees

This reminds me of something I saw a few years ago on Newsroom. I think it hits the nail on the head as far as how we got here. The whole video is good but at the 2:55 mark it shows exactly the mistake that was made all those many years ago.

Just imagine how different things would be today if there were no advertisements allowed during the news.


"There are things which, if done by the few, we should refuse to imitate; yet when the majority have begun to do them, we follow along - just as if anything were more honourable because it is more frequent!"

Good news sources exist. If you opt for ones that actually have all the empirical evidence and citations to backup their claims.

News sources that conform to your own confirmation bias can still be extremely inaccurate... Even if the bullshit they sprout is exactly what you want to hear.
I find that people who moan about something being right-wing or left-wing tend to fall into the above trap.

Trump is the most far right leader ever elected under a democratic system. In Europe he would have been banned from running as a candidate. Trump is an autocratic leader and he is not compatible with a democracy. Trump has hired and fired countless advisers and when they advise him to do something he does not agree with, he fires them. Trump is not willing to listen to experts that know more than him on various issues. Trump is an autocrat and arrogantly believes he knows everything. The journalists have every right to call out Trump and question him on the his silly comments and bad decisions. 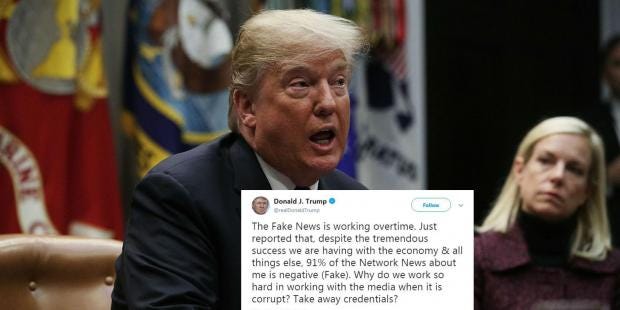 The fact is that the MSM is generally far more reliable, reputable, and based on the facts than fringe media.

Obviously you being in the United Kingdom... Would have different media outlets that I am obviously not privy to.