Well organisms do adapt to climate change, this one is a little different. Mainly due to the speed of the change. There are species which already have evolved the last decade to addapt and have a thicker shell than a few decades ago. Although it also makes them slower so it's a trade-off.

Anyway its a combination off all things which will cause massive damage to the seas. Algae bloom caused by over fertilisation doesnt help either, since the algea neccesary to build coral compete with other weeds and algea.

Fishing also severely damages coral reefs and the effect of microplastics and pesticides/chemical dumps in the ocean probably isn't helping either. However acidification does stack since corals recover faster the higher the Ph value of the waters.

Although the rate the ocean is acidifying and the climate changing has pretty much never occurred, outside of other mass extinction events such as when the asteroid stirked which eliminated the dinosaur and the aftermath of that event. The corals might survive the acidification, although large reefs are already severly damaged, especially in the Caribbean area.

So in the end acidification alone might ir might not let corals go extinct. We simply don't know because of the current rate of climate change and accidfication is way faster than before and evolution, as effictive as it is fir organisms to addapt to extreme conditions needs a lot of time.

So while accidification even at the current rate alone might not be enough to nake coral reefs go extinct. Its pretty safe to assume it makes reefs more vulnerable and that might just be enough to lower the tipping point of no return low enough for all the other cap we do, for us to surpass that tipping point.

Although I would rather not take chances of losing any major reef because off acidification. Bleaching is still a major issue for a big part of the great barrier reef, along with an abbundance of plastic and nutrients. Over fishing is somewhat controlled in Australia. 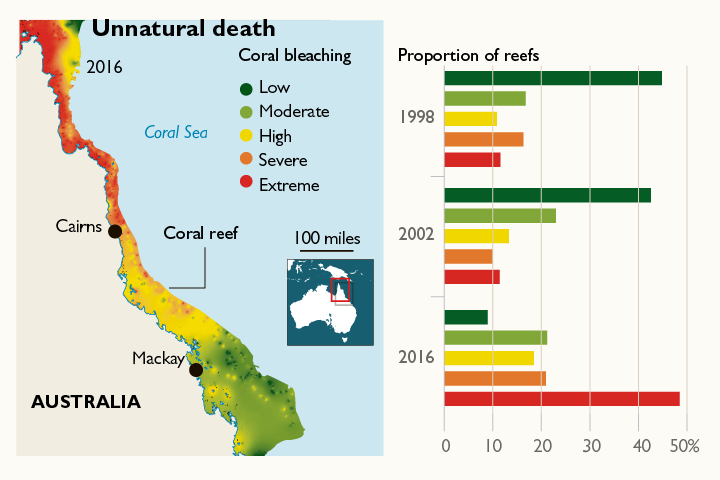 Carbon capture and iron fertilization are some proposed solutions, but they have their setbacks.

Not to mention neither are long therm solutions and they combat the symptoms not the main issue. But as temporal solutions they can buy us some time to decrease our carbon footprint.

Unfortunately, the greening also makes plants like poison ivy larger and more potent. It also makes blue-green algae a bigger threat to ecosystems. Though growing larger crops is a plus, the loss of farmland due to climate change offsets this gain.

I'm all for it, yet it seems to be part of the Canadian citizenship duties. Can't have the lawn looking anything other than Wimbledon stadium ready! Summer here is the sound of lawnmowers.

Hello? Anyone gonna answer my question about coral bleaching?

You can fight the symptoms of coral bleaching by either mixing cold with hot water in the oceans to cool the water, so that the algea (zoöxanthelle) that give coral color have a better habitat. Australia is investing 2.2 billion in big mixers. Decreasing wastewater and chemical waste dumps in oceans in feneral also makes the habit better for Corals and the Algea, so that wouldn't hurt either.

Adding more calcium to the water also works, since calciumcarbonate increases the pH, but you would need the entire coast of dover multiple times. So cutting fossil fuels is really the best way we have.

That's what I thought. Kill the fossil fuels! ^^

And speaking of algae plumes, could we harvest the algae as a fuel source? I've heard of it being done.