Hey guys! So I've been a member of the VGChartz community for 6 years now, and I usually have to type things in pure English because many simple Nigerian slangs that are a part of my lingo wouldn't be understood by most people if I used them here. Seeing as this community is a regular part of my life now, I think I should break the ice in that aspect. I'll teach you guys a few Nigerian slangs, and I'll use a few of them in my posts from now on. Feel free to ignore them (you'll still understand my posts) or to learn them for the fun of it. So I'll start with 2 slangs and update the OP with more over time if this thread gains some traction.

Keep in mind that there are many languages in Nigeria, so I'm not teaching you a particular language. I'm teaching specific words or phrases that have become so widespread in the country, that even if the word is from language A, people whospeak language B willl know what that word means, even if they don't speak language A. Think of it like words like "bonjour", "monsieur", "hola" or "arigato" that most of us understand even though we don't speak those languages.

Slang 1 - "sha" (pronounced like "shark" without the "K", and dragged, strecthed or slurred)

Sample - "The demo didn't impress me, but I'm buying the game sha"

Slang 4 - "die" (the English word, but used in a different context)

Sample - "I met some cocolets at the mall"

You can also use "Babylets" and "Mamalets". Sexiest when used in rapid succession. Call her your cocolet, your babylet, your mamalet (don't add "and", because all 3 mean the same thing)

This is a Nigerian swear word. Just like the f word has a gesture (the middle finger), waka has a gesture. You stretch out your arm toward the person you're insulting and open your palm as in the image below. In case you can't see the image, imagine you were shooting an invisible fireball out of the center of your palms, and had to make sure your fingers weren't burnt in the process. Kinda like how Ironman fires his repulsors. 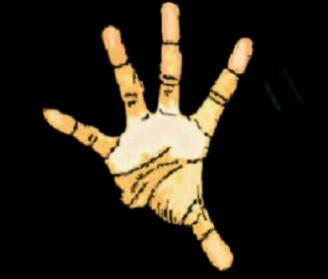 Slang 8 - "Your fada!" or "Your papa!" (Broken English prnounciation of 'your father')

English Equivalent - None. This is another swear word (or phrase). Commonly used with Slang 3, as in "your fada nyash!", there's no direct way to explain it in English, but it implies heavy insults to the person's father. I couldn't find any images that correctly describe this (apart from some images of people throwing waka with a "your fada" subtitle"), but I've uploaded one to my google drive. The link is below. The image doesn't really do it justice, but it will emphasize a popular context in which the phrase is used. We usually yell it just before delivering the finishing blow to a person or thing. I could yell it just as I'm finishing someone off in a game, or yell it at my books when I finally solve a math problem.

I was hoping for some swears honestly. Nice of you sha.

Nice idea for a thread

Oh, we'll get to that

Only two slangs for now? That's kind of small, abi?

But I liked that this thread made sha!

You totally got it! Ok, I'm adding two morenow. First, one of the most important words in anybody's vocabulary, anywhere in the world:

Oh come on, that it? Theres more abi?

Our broken English removes articles such as "an" and "the", but it doesn't sound like the George of the Jungle or Hulk English Hollywood feeds us where they refer to themselves in third person. So instead of "she has a big ass", we'd remove the "an" and you'd get "she get big nyash". I guess I should make that slang 5. "get" is "has" or "had"