Forums - Gaming Discussion - Wal-Mart to Enter Used Video Games Market From Next Week...Day of Reckoning! Gamestop shares drop 5 percent! In store credit for whatever you want!

Joining the likes of GameStop, Best Buy and Target, Wal-Mart has announced that it's entering the used video games market, allowing customers to trade in pre-owned games in exhange for anything in-store or online, be it groceries, gadgets or whatever.

Set to roll out across 3100 stores in North America from March 26th, Wal-Mart will accept games for trade-in credit that can be used in Wal-Mart branches and Sam's Club, be it in-store or online. Traded games will be refurbished and made available to buyers.

"Gaming continues to be an important business for us and we're actively taking aim at the $2 billion pre-owned videogame opportunity," said Wal-Mart US Chief Merchanising and Marketing Officer Duncan Mac Naughton in a statement.

[Via Yahoo! News | Thanks, Brendan]

So where are they going to fit all these used games? In the Wii u and Vita shelf space?

So instead of getting ripped off at Gamestop I can go get ripped off Walmart! At least I won't have people trying to sell me subscriptions to shitty magazines.

Yes, but you will have Homeless people selling you stuff. Any better? At least they will not be against nintendo like gamestop employees seem to be.

also, walmart has the best deals in town.

here is another cool picture for this i just found. They are coming fast! 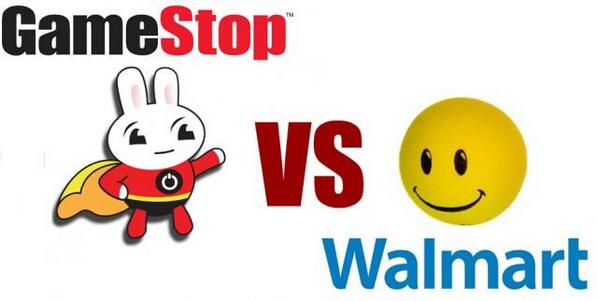 Thats pretty cool actually. I would rather buy from Walmart than ebgames anyday

So far Best Buy is the best value in used game trade ins IMHO. Right now I can get $40 for BF4 and AC4 each. While Gamestop is offering $40.00 for Titanfall. Couldn't tell you what they will offer for BF4 or AC4 as they don't make it easy to get that info unless you step foot into an actual store but I doubt it is more than $25.

WalMart is supposed average around $35 for trade ins so that still beats GS. At this point you are an idiot if you choose GS over Wal-Mart or Best Buy. Heck, you were always better off ebaying your games but $40 bucks from Best Buy can't be beat.

Get in store credit to buy whatever you want!

News   less than a minute Ago

The fight against used video games just got a bit harder for publishers, as Walmart announced today plans to offer store credit for used game trade-ins.

Starting Wednesday, March 26, Walmart customers will be able to trade in their video games and for credit that can be used to purchase anything sold at Walmart and Sam's Club, both in stores and online. The traded-in games will be sent off to be refurbished and made available for purchase in "like-new condition at a great low price." Walmart will distinguish between new and used games by labeling traded-in copies "Certified Pre-Owned."

“Gaming continues to be an important business for us and we’re actively taking aim at the $2 billion pre-owned video game opportunity,” said Duncan Mac Naughton, chief merchandising and marketing officer for Walmart U.S. “When we disrupt markets and compete, our customer wins. They’ll save money on video games and have the flexibility to spend it however they want.”

“While new releases will remain the focus of our gaming business, we’re glad to give our customers the option to buy pre-owned games,” added Mac Naughton.