I'd be very worried if AMD doesn't launch the 7700XT next year. heck, I'm even disappointed they aren't launching it this year along the higher end RDNA3 cards.

I don't know if TCL supplies some console parts to Sony and MSoft, but I don't see how neither of them can expect to launch newer models of their consoles when they can't produce enough PS5-XbX/S. What's the point? And, on top of that, on a lower node to make their supply even lower than the current models.

So yeah, I'd take this rumor with copious amounts of salt.

And Pemalite, I don't know iwhat would AMD get from going back to a previous design model. Wouldn't it be easier to do as Nvidia and add some compute cores (Tensor cores) like they're already doing iwth the RT ones?
The enterprise cards based on CDNA could probably benefit the most from going with a more compute capable architecture design.

My biggest million dollar question is:

Is everyone gonna be gaming in 8k by 2024, let alone being able to afford and get their hands on said pro consoles and TV's?.

I still don't hear thousands if not millions of stories about ppl gaming at native 4k on the net, maybe from a few PC gamers that have high paying wages, but I don't hear a lot from both sides as much as marketing suggests.

Like we're seeing these new QLED monitors that go upwards of 4k, but cost your very soul, how many ppl are gonna own those diamond beauties?.

I just feel like the push for native 4-8k and beyond comes off a tad pointless, mostly because we're slow to get there with the tech and topping it off with lower stock and higher prices.

All I want is native 1440p and 144hz is still goo enough for me. I have experienced a friend's surround sound system and his 4k OLED tv, but I'm still a monitor kinda guy and well, I can't find a 1440p OLED monitor that does 144hz and doesn't want my soul lol...

It will just be for those influencers like Linus Tech Tips where they will make a video about how great it is to spend $30,000 on a TV and $10,000 on a gaming rig to play Doom Eternal at 5fps at low settings.

Luckily with Samsung Display, 1440p 144hz OLED is a real possibility. It's just whether or not they want to commit. Expectations are 6900XT-like performance. And probably also needed to keep up with NVidia.

I think that's for CDNA, not RDNA. Those would definitely profit more from an increased compute performance than RDNA cards.

Sony reveals official PC sales numbers for God of War, Horizon Zero Dawn & Days Gone
https://www.dsogaming.com/news/sony-reveals-official-pc-sales-numbers-for-god-of-war-horizon-zero-dawn-days-gone/
Sony has just revealed the official PC sales figures for God of War, Horizon Zero Dawn and Days Gone. According to the company, Horizon Zero Dawn has sold 2.39 million copies, and is currently the best-selling PC game it has released.
God of War comes in second place with 971K copies, whereas Days Gone is in third place with 852K copies. As Sony noted, these PC sales figures are as of March 2022.
>> Given how much they expect to make this fiscal year, expect lots of new PS titles.

The Epic Store's new free game is BioShock: The Collection, featuring the three games (the first two, remastered): https://store.epicgames.com/en-US/bundles/bioshock-the-collection
The free game for next week is, once again, unknown..

There's a new Humble Bundle: the Cities Skylines - Colossal Collection, featuring the game and up to 31 DLCs during the next 20 days. Honestly, if you like the game, this bundle is a steal: https://www.humblebundle.com/games/cities-skylines-colossal-collection

And Fanatical has four new deals:

PS5-exclusive Returnal appears on Steam database, codenamed “Oregon”
https://www.dsogaming.com/news/ps5-exclusive-returnal-appears-on-steam-database-codenamed-oregon/
It appears that the PS5-exclusive game, Returnal, will be also coming to PC. This roguelike third-person shooter has appeared on Steam’s database with the codename “Oregon”.
>> As I said above, expect a lot more PS titles on Steam/PC.

The Marvel MMO project at Daybreak Games has been cancelled
https://www.pcgamer.com/uk/the-marvel-mmo-project-at-daybreak-games-has-been-cancelled/
The Marvel MMO (opens in new tab) in development at Daybreak Game Company has been cancelled. Enad Global 7, Daybreak's parent company, announced today that instead of pouring a truckload of money into making the game happen, it's going to spread it out across a whole bunch of smaller projects, including updates to existing MMOs Lord of the Rings Online and DC Universe Online.

Vampire: The Masquerade - Bloodhunt ranked mode paused because PS5 owners keep getting wrecked
https://www.pcgamer.com/uk/vampire-the-masquerade-bloodhunt-ranked-mode-paused-because-ps5-owners-keep-getting-wrecked/
Vampire: The Masquerade – Bloodhunt (opens in new tab) is a very solid battle royale: I enjoyed it more than I expected to when I horsed around with it in the early days of its Early Access release, and more recently Morgan said he's "really impressed with how well developer Sharkmob has nailed the basics" in the full release. But it hasn't been entirely without problems, and today Sharkmob announced that ranked play will be paused until the launch of the next update.
>> Not because of cheaters, but because of the superiority of KB+M over a controller.

World of Warcraft finally lets Horde and Alliance players get along
https://www.pcgamer.com/uk/world-of-warcraft-finally-lets-horde-and-alliance-players-get-along/
Before Blizzard made it a whole world, Warcraft has always been about two sets of fantasy action figures fighting each other. Orcs and humans. Horde and Alliance. Although World of Warcraft has had the opposing factions team up in the past to defeat big bads, they've never been able to do so as a permanent function of the MMO's grouping systems. In next week's Shadowlands patch 9.2.5, that finally changes.

Cyberpunk platformer Replaced is delayed because of Russia's invasion of Ukraine
https://www.pcgamer.com/uk/cyberpunk-platformer-replaced-is-delayed-because-of-russias-invasion-of-ukraine/
Revealed at the Xbox-Bethesda showcase in 2021, Replaced (opens in new tab) is a 2.5D cyberpunk action-platformer set in an alt-history 1980s US, a nation plagued by corruption, greed, and a general collapse of society in the wake of a catastrophic nuclear event. As an artificial intelligence imprisoned in a human body, players must explore the region of Phoenix-City and learn to adjust to human life, while "beginning to understand that everything comes at a price."
I dig the concept and the announcement trailer released last year (embedded above) is a real eye-grabber. Unfortunately, it's going to be a longer-than-expected wait before I (and you) get to play it. Publisher Coatsink said today that because of the ongoing Russian invasion of Ukraine, it's been forced to delay the release from 2022 to 2023.

Stalker-like online FPS Survarium is closing next week after 7 years in early access
https://www.pcgamer.com/uk/stalker-like-online-fps-survarium-is-closing-next-week-after-7-years-in-early-access/
The Stalker-styled online FPS Survarium will close down for good at 11:59 pm Kyiv time on May 31, developer Vostok Games said today. The game will also be delisted from Steam.
"A bittersweet day approaches," Vostok wrote. "On one hand it is good to look to our future but on the other, it is difficult to say farewell to an old friend.

I regret to inform you Ni No Kuni's cute new MMO has blockchain crap up its sleeve
https://www.pcgamer.com/uk/i-regret-to-inform-you-ni-no-kunis-cute-new-mmo-has-blockchain-crap-up-its-sleeve/
We quite liked Ni No Kuni 2 when we reviewed it back in 2018, calling it "an ambitious, beautiful JRPG that keeps on giving." Instead of following it up with another big budget console game, developer Level-5 took a different approach, releasing a mobile MMO titled Ni No Kuni: Cross Worlds in 2021. Apparently it was a smash hit last June, raking in $101 million in just 11 days despite being available in only a few countries. That almost certainly makes Cross Worlds the most lucrative game in the series.
A year later, Cross Worlds is now available in English on PC and mobile, putting it in front of a much larger audience. And it's quite a looker, though early impressions indicate there's not as much to its combat as you'll find in comparable mobile/PC MMO Genshin Impact. Unfortunately publisher Netmarble also has a whole bunch of plans around NFTs and the blockchain that seem like they'll inevitably clog up Ni No Kuni with gross microtransactions.

Microsoft Flight Sim's Top Gun tie-in teaches you how to fly like a skillful maniac
https://www.pcgamer.com/uk/microsoft-flight-sims-top-gun-tie-in-teaches-you-how-to-fly-like-a-skillful-maniac/
Microsoft Flight Simulator is brilliant for a lot of reasons, but for me, it's pretty much just an opportunity to take leisure cruises through parts of the world I've always wanted to visit. With a new Top Gun: Maverick expansion released today, we're now invited to perform ridiculous, high-skill manoeuvres in a specially decked-out F/A-18E Super Hornet, thus eliminating every trace of "chill" this game normally offers.

Game Grumps is working on a new psychological horror game
https://www.pcgamer.com/uk/game-grumps-is-working-on-a-new-psychological-horror-game/
If Game Grumps was looking to create the antithesis to its vibrantly wholesome and daft dating sim Dream Daddy, it's very much succeeded with Homebody.
It's a psychological thriller and Game Grumps' second collaboration with publisher Rogue Games. Homebody puts you in the shoes of Emily, solving puzzles to try and stop your old college pals from getting murdered, all while unravelling Emily's shaky past. It's very PS1-era FMV, drawing inspiration from 80s slasher films and retro horror games for some perfectly spooky vibes.

Miyazaki's favourite Elden Ring boss is Radahn
https://www.pcgamer.com/uk/miyazakis-favourite-elden-ring-boss-is-radahn/
Elden Ring (opens in new tab) has been a wild success for FromSoftware and publisher Bandai Namco, and Xbox Japan recently spoke to Hidetaka Miyazaki. Miyazaki's one of those figures where you have to be careful about ascribing too much to him—these games are, after all, made by hundreds of people—while at the same time acknowledging that, as a game director, the titles he works on have distinct and singular characteristics.
>> I copied the link to the interview, but be warned that it's in Japanese.

"AMD would like to issue a correction to the socket power and TDP limits of the upcoming AMD Socket AM5. AMD Socket AM5 supports up to a 170W TDP with a PPT up to 230W. "

"The new 230W socket power will be almost as high as Intel’s LGA1200-based Core i9-12900K which has 241W PL2/Maximum Turbo Power. One should note that this 170W TDP value was already mentioned by MSI, even though AMD until now did not confirm that this is TDP. Meanwhile, AMD’s own slides only mentioned ‘native support for up to 170W’." 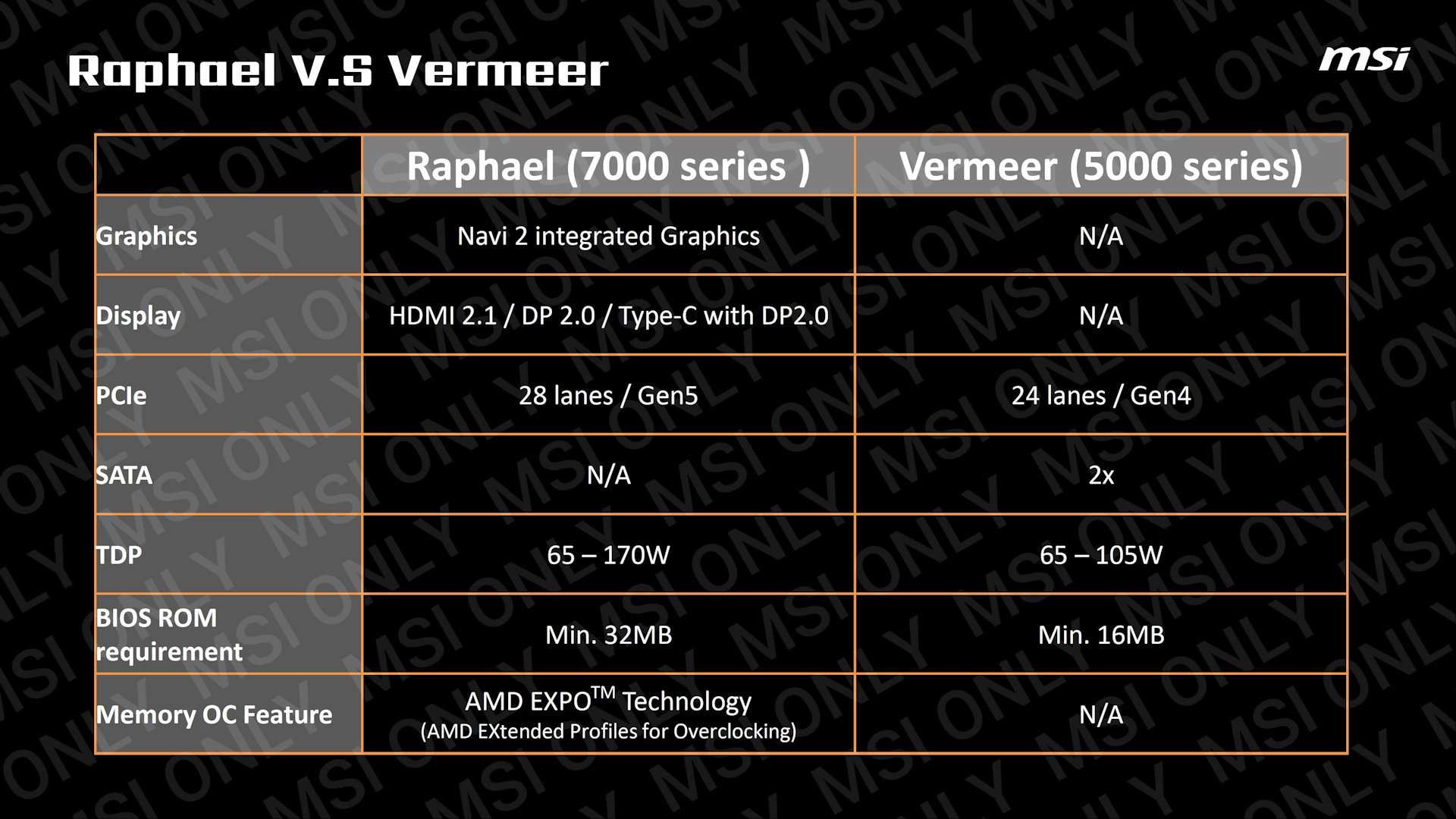 Looks like the wattage memes won't be exclusive to Intel anymore... One thing to note however is that 5000X series did not include an iGPU while the 7000 series does so naturally, it would sip more power. But of course, so did Intel CPUs when we memed them.

I don't think it's a "could" but rather it "will" cause any upcoming GPUs not supporting DisplayPort 2.0 may as well commit Seppuku

Sony's investment conference has a lot of interesting insights as to their plans for the future including for PCs.

I'd say this slide is a bit worry some cause Playstation will be drastically increasing their focus on live service games: 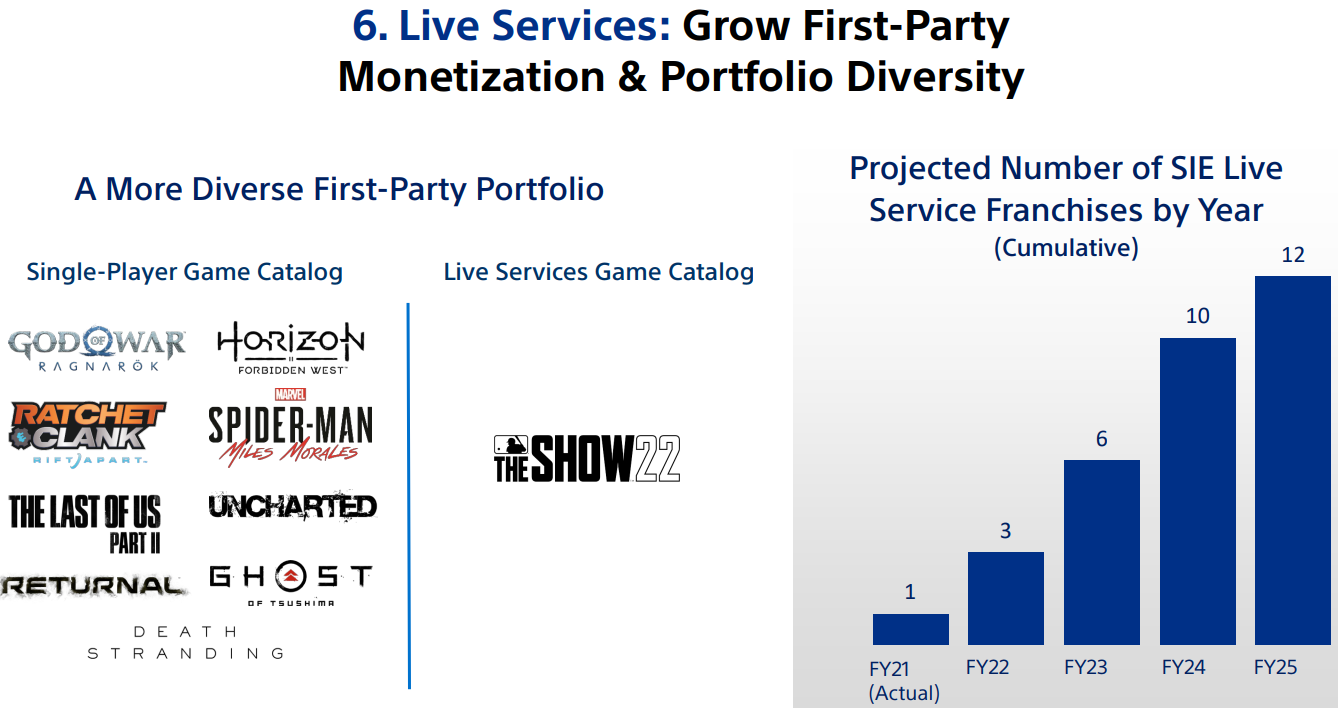 The Maverick challenges are superfun!