Sony has released their PS5 SSD requirements and DF made a list of SSDs that should work with the ps5. The interesting thing is that they seemed to have backtracked with the reads slightly by going with 5.5GB/s instead of 7GB/s. They do mention that:

" Not all games are necessarily playable with the exact same performance provided by the PS5 console’s internal Ultra-High Speed SSD, even where the M.2 SSD device’s sequential read speed is faster than 5500MB/s."

The main problem seems to be the heatsink size. While most SSDs will work, some won't due to the heatsink that they come with. It's also important to add a heatsink to your SSD if it doesn't come with one. Overall, the ones we thought were gonna work are gonna work by the looks of things. Hopefully these aren't about to have the same supply issues as everything else. 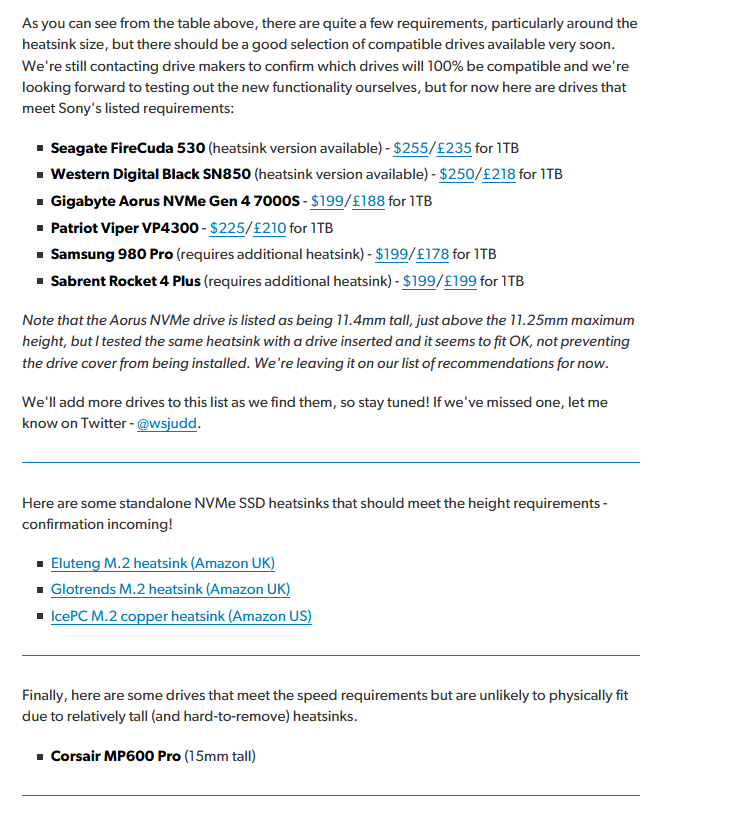 I'll take Ratchet and Clank and The Last Guardian to go...

Ah yeah UC isn't for everyone.. for me I like to revisit the series every few years. And since Sony refuses to patch PS4 games with higher framerates and res on PS5 I'd settle for PC releases with uncapped fps. GoW games are excellent and highly recommend the original trilogy and 4 is darn amazing, should they ever make their way to PC.

Same with Bloodborne etc. Not sure what the deal is patching certain games on PS5 and not others.

I have one very much like the Eluteng M.2 that i got from Aliexpress for about £5. Which Sony used in their reference guide for installing so that's one I'd go for if you have a fast (and hot) NVMe like a SN850 or 980Pro

Yea that's a good idea. I might get one once enough ps5 games come out like GoW. I will say that the space issues isn't as bad as I thought it would be on the ps5 thanks to some of the games being surprisingly small.

Yeah, space is not that much as an issue that I thought it would be. Like I bought one because I though I'd be constantly deleting stuff with only 667GB of space available but game sizes are manageable - discounting any Call of Duty games xD Holding might be also a good idea, in case of bugs etc and beta testers giving information as to what drives work best.

As for performance from running games on an NVMe, Tom Warren from the Verge (posted on Era) who's tested it though he said it works well and no hitches thus far from playing Ratchet and Clank. Didn't specify which drive though https://www.resetera.com/threads/official-ps5-m-2-storage-expansion-coming-in-the-next-update-for-beta-users.463941/page-5#post-70390977

"We, the undersigned, have had enough," it says. "It has been over a year since the first revelations of systemic discrimination, harassment and bullying within Ubisoft came out. At the time, you acted surprised to hear of these acts going on within your own company and we gave you the benefit of the doubt. However, we have seen nothing more than a year of kind words, empty promises, and an inability or unwillingness to remove known offenders. We no longer trust your commitment to address these issues at their core. You need to do more."

I'm glad this is reenergizing Ubisoft employees to hold their own management accountable and not tolerate the damage control and enablement resulting from their own scandal.

I don't know if the article from DF mentions it, but at the one from WccfTech they do: "It has also been confirmed that the PlayStation 5 console does not support Host Memory Buffer, so SSDs that support it may see slower than expected performance." It may be worth checking which drives meet the speed and size limits, and also if they use HMB to achieve those numbers.

Ratchet & Clank would be cool, and it wouldn't be surprising if the latest one comes to PC. And well, wouldn't it be great to have some Jack & Daxter remakes? I know, I know, that's near impossible, but let me dream a bit.

My biggest problem with the series is that I played them late and, by then, other games did the same things but better.

I haven't played a God of War game since the last one for the PS2. It would be awesome to play them on PC.

It's obvious that Ubi didn't do enough. Hopefully, the employees can force them to actually make the necessary changes.

Gotta disagree with other games doing it better, I found the Tomb Raider trilogy kinda lackluster. The first was okay and the others didn't rate much. Its like a mish-mash of other games with unnecessary RPG lite elements that didn't add much to the experience as to pad the game out. The characters, pacing and story in UC games are in another league. Opinions and all that though lol.

The whole SSD thing on PS5 is a bit of a mess.

I think I will just hold off for a few years and keep shuffling between the internal SSD and mechanical hard drive... Same thing for my Series X, will wait for 4TB cards to drop before I upgrade.

SSD's are only going to get faster, cooler and have more capacity...

In saying that... I can't tell much difference between my current Samsung 980 Pro nvme drive verses the old Crucial BX500 SATA SSD in my old rig in day to day use, it's only when you are doing big copies on internal storage that you go "oh shit".

I guess we are still living in a world where software is designed with mechanical storage in mind though, 64GB of DDR4 3600Mhz Ram probably doesn't help either with Windows using a big % of that as caching.