Borderlands 2’s second expansion -- Mr. Torgue’s Campaign of Carnage -- will launch on November 20th. Like Captain Scarlett and Her Pirate’s Booty before it, Campaign of Carnage offers new areas for players to explore, three new achievements, a new currency and plenty of new missions for players level 15 or higher, with enemies scaled to your level.

The basic story of Campaign of Carnage revolves around a new vault discovered in Pandora, buried in the center of a large crater that will only open “once the champion of Pandora feeds it the blood of the ultimate coward.” Your introduction to Mr. Torgue’s Campaign of Carnage comes via Mr. Torgue himself, screaming at you like a terrifying mix of Hulk Hogan and Macho Man Randy Savage with a deep love for explosions.

As Mr. Torgue describes the new vault, “we at the Torgue Corporation sincerely believe this is f**king awesome -- so awesome that we're going to set up a tournament to find this number one badass.” That tournament takes place in an arena that will serve as the centerpiece of the expansion, built around the Badass Crater of Badassitude where the vault is buried. You’ll need a sponsor to participate, and one of the first new characters you’ll meet is Piston, a scarily-large brawler with engine pistons for hands.

Sitting down to play the Campaign of Carnage, it’s obvious that Gearbox intends this expansion to be played by its most hardcore players. Torgue’s campaign mixes Borderlands 2’s typical mission structure with the Circles of Slaughter seen in the main game, using horde mode-style battles to punctuate story missions throughout its running time, which is roughly the same as the previous expansion.

Like in Pirate’s Booty, enemies have been replaced by new versions related to the theme -- Marauders become bikers, Goliaths become Enforcers -- but Campaign of Carnage has plenty of new enemies to offer as well. The expansion includes multiple bosses, like Pyro Pete (a surprisingly lassez-faire flamethrowing psychopath), Motor Mama (a “rather buxom lady on a motorcycle with twin sidecars” according to concept designer Scott Kester), and Badassaurus Rex (a “big crazy Torgue-themed robotic dinosaur breathing fire”). 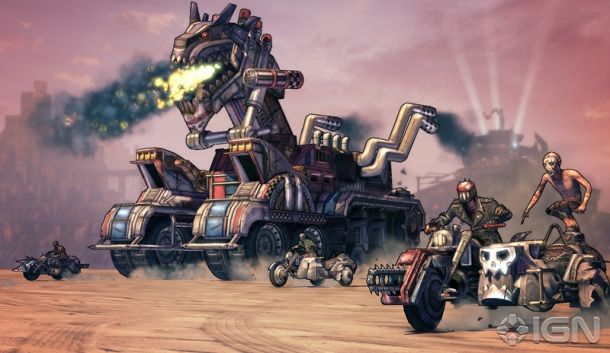 According to Kester, the expansion is built around “the culture of combat,” and it’s not shy about exploring it. Playing the first hour, it’s clear that you’ll be fighting. A lot. The only ones fighting more than you are your various enemies, who are just as likely to hurt each other as they are to attack you. Combat doesn’t become too repetitive, though. Aside from the story missions and arena bouts, you’ll come across an additional Circle of Slaughter in a bar brawl early on, and even when you do revisit the main arena you’ll encounter different combat scenarios each time.

As for that new currency, unique vending machines spread throughout the Campaign of Carnage’s new areas will only accept Torgue Tokens, which you’ll have to scavenge from killed enemies. Each machine features a selection of badass Torgue guns and always offers a legendary weapon in the Item of the Day slot. Campaign of Carnage will also feature some familiar faces, including Tannis, Moxxi and even Tiny Tina, who Kester says has “her own thoughts about sponsorship.” Tina will also offer a new subset of weapons, and based on her affinity for explosions it’s not hard to guess what they’ll do. 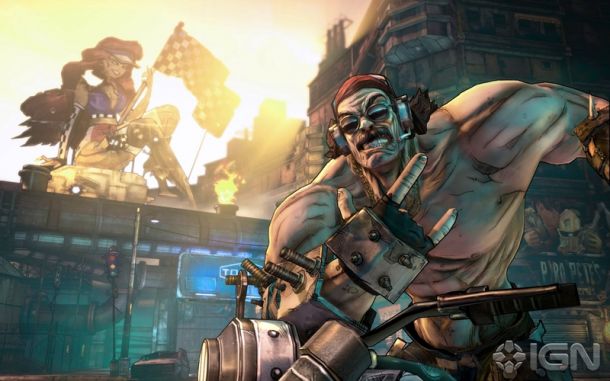 Looking ahead, Gearbox says it’s already thinking about the next downloadable content. Eventually, the developer has plans to raise Borderlands 2’s level cap, but not in the way you might expect. “We’re discussing trying to do it in a more interesting way,” Gearbox vice president of marketing Steve Gibson told IGN. “We think people are going to be really happy when we do get to it. It’s a little bit different way of doing it. Yes, the number will go up, but there are some other things associated with it that we’re trying to do an even better job of.”

Awesome! I'm glad that I got the Season Pass for this. I hate supporting DLC in general but Gearbox have been great with what they've released for both Borderlands games. And more Tiny Tina is always a good thing. Can't wait to get my hands on her Ba-donka-donks! Borderlands 2 is my GOTY so far.

But then I re-read the headline properly. Cool stuff!

The season Pass seems awesome if it works. It did not on my 360 version for the Pirate content. I have not been home in days to check if it works now.

That said Borderlands 2 is far and away my game of the year and you are a complete bum for not having it on 360 so I could go coop with you.