Forums - Movies Discussion - Raving Rabbids to see a Television series and UbiSoft is dedicated to making it huge!

Usually when a television show is proposed a pilot is created and the idea pitched to the network then the show is picked up on a season by season basis. However UbiSoft decided to go above and beyond the call of duty creating a new Raving Rabbids full CG cartoon with a guarantee of 78 episodes. The episodes will each be about 7 minutes long instead of the average 20+ minute long TV show, however the show will air on a regular basis on France Television.

The program promises to embody everything that makes Raving Rabbids so hilarious and will targeting  youth and children. UbiSoft guarantees that UbiSoft Motion Pictures will work directly with UbiSoft's studios in France to ensure all the content is official Raving Rabbids content from the creators themselves. The program will be authentic and origional staying true to the Rabbids we know and love while causing us to laugh our asses off.

Television France is over joyed at the idea saying "We are delighted to join forces with Ubisoft to co produce the first Rabbids animated series. The Rabbids are already stars of gaming, kids and adults of all ages enjoy  them all round the world," Television France has already secured the distribution rights for the DVD and Video on Demand in France.

Outside France , Nickelodeon has secured the distribution rights and will be airing the episodes in 26 half hour television programs globally. With Jean-Julien Baronnet , Chief executive officer of UbiSoft Motion Pictures saying “Nickelodeon is one of the world’s leading entertainment brands for children and families, and Ubisoft is thrilled to be partnering with Nickelodeon to deliver unique television programming to its viewers,”. “As the world’s most recognized entertainment brand for children and families, Nickelodeon is the perfect vehicle to share the zany Rabbids characters and their crazy adventures with television audiences around the globe. This partnership represents a major milestone in Ubisoft’s strategy to expand its brands to new media, thereby attracting new audiences to its games."

Am I the only one excited about this television program? It is the first series of programing to come from UbiSoft Motion Pictures. If it is successful we could see other game related television and films products. Imagine a Ghost Recon television show or movie. A Assasins Creed Live Action film a mainstream Rayman animated tv series similar to the old one. Not to mention programming from UbiSoft's other valuable franchises.

Heck I hate to say it because it scares me, but I could even see Petz recieving a program for children like Zoboomafoo or a Discovery channel like program exploring animalz based around the Petz series. Fashion programs for girls based on the games for DS and other titles. UbiSoft has so many franchises that could be adapted to film.

I think Raving Rabbids is a good start, whats your thoughts on the first major program to come out of UbiSoft Motion Pictures? Do you wanna watch? Will it be a success? What effect will the tv show have on game sales and vice versa? 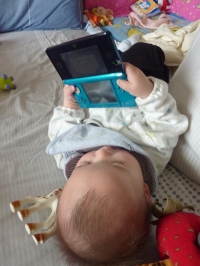 But we must first concentrate ourselves on the way to entertain people, for video games to live. Else, it's a world where sales representative will win, which has as effect to kill creativity. I want to say to the creators all around the world:"Courage, Dare!". Shigeru Miyamoto.

This could be a pretty popular show! Those little rabbids are crazy and high on energy. Kids like energy (spongebob) so this will be a good mix.

Oh, and I think that the show can only help the sales of the Raving Rabbids games.