44. Sypro: The Year of the Dragon on the PS1. Last great Sypro game before it sucked real badly. Insomniac rules!

45.  Parappa the Rapper on the PS1. Before there was Rock Band and Guitar Hero... There was this xD

47. Xenogears on the PS1. A great rpg. Got me hooked to the xenosaga series.

49. Legend Of Dragoon on the PS1. One of the best RPGs i have ever played. Sony should make a sequel NOW!

50. Jumping Flash on the PS1. My first playstation game and one of the best platformers of all time IMO. 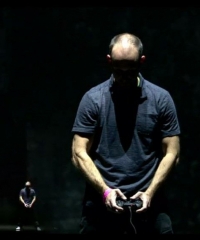 How did you get the game box art so small? When i copy a picture from the internet i always have big ass box art.

I was thinking this needed some sort of a reminder kick to remind people. Heck, I forgot about it until I went through files and found the top 50 for this...

Sorry for the Delay between Postings!

8. Zelda and the Ocarina of Time (GC)

Final Fantasy X aimed for excellence, and came as close as any PS2 Final Fantasy game could. It had well designed cutscenes that weren't too unnecessarily long, beautiful art, thorough gameplay, lots of options and the Sphere Grid. As though I could make a post without it, the music from it fit it like a glove, capturing the emotions of the game and situations and bringing them to a nearly magical level.

The Sphere Grid could, quite possibly, be the best leveling system in an RPG. It allows characters to be focused, at least starting out, in an area, but very easily customize to another area or speciality or even jumping across to grab spells. The most dedicated of players can max out everyone's grid, but a reasonably thorough player can enjoy having their healer be able to cast a black magic spell or even hit something with a weapon when low on MP.

The "dungeons" are full of fun puzzles that take a bit of thinking to reasonably solve, as well as some combat, leading to the "Guardian Force" system in this, referred to as Aeons. There are obvious ones, secret ones and "really now?" ones, and they all lead to a fun way of trying to defeat other things.

The story itself seemed strange at first, but as it progresses it takes a myriad of strange turns and twists, with heroes being villians, villians being allies and some people being not people at all...and then the story comes to its conclusion. For people who love story, FFX will not disappoint in its story telling and accompanying visual and music.

Well, I am going to catch hell for this - Final Fantasy VIII is, bar none, the best Final Fantasy to date. It started with a Latin song and images of things that you know nothing about, a fight leading to a scar that lasts the whole game, explosions of fire and feather...then you get to play.

The characters all have their own flaws and personalities, everything from a fallen teacher to a marksman and a rebel to a loud mouthed guy who punches things. The Guardian Forces in this final fantasy provide not only a junctioning system to help with abilities (and also help control how many of each spell you use), but cutscenes showing just how awesome they are. The Guardians Forces, of GF's, control everything about abilities, from what you can use in combat, to how abilities get tweaked, even what elements you defend and attack against well

FF VIII was a 4-disc game, and the first disc ends in a very dramatic fashion. Not to give it away, but there are theories floating around on the internet explaining how the last 3 discs could even be a dream. The story, after the first disc, takes strange pathways that don't make sense at first, but eventually all meander to the same destination, leading to one of the most built up final boss fights I can remember in a game, ever.

Overall, the GF system, characters and story pulled together with great music and strange plot twists make this a beautiful, unmatched game to date.

Wow. Simply, just wow. Ever since this game, you can feel that all the other Zelda games have been trying to be as good. This one features link fighting dark forces over two worlds, trying to save the princess, help the sages and stop gannon, but the storyline is so clean cut and logical that you get sucked into it, really wanting to save the world, stop the evil wizard and restore Hyrule to its normal self. This one has everything from a castle break-in, magical weapons, heroic music, truly evil villians and secrets everywhere.

To truly enjoy this game, I really do believe people should sit down and play it through. Not watch a friend play it, not play a piece of it, but the whole thing, and truly embrace what Zelda has been about this whole time.


If it's a music game, I've probably played it or wanted to play it. On a related note, I am usually not allowed to sing on those games...