Forums - Gaming Discussion - The potential of videogames and rhythm heaven 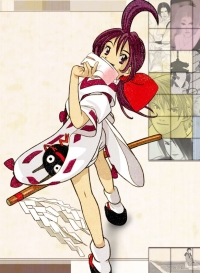 I have a lot of interest in content that demonstrates itself and its medium unique and interesting. Junji ito is one of my favorite manga authors because of the way he uses panneling and page division to create tension and lead you to the next horrifying imagery. In movies, i love early ridley scott because of the way he uses the setting and the athmosphere of the location to create an audiovisual sense of place. And in videogames, i love the rhythm heaven games because they show the potential of using interactive mechanics to create investment on the player, and justify the use of cartoony and absurd scenarios.

Videogames, as i see it, have a better time integrating surrealism/sillyness to their main progression. A fairy tale about a plumber going through a kingdom of mushrooms to rescue a princess from a turtle-dragon can be made interesting or ever potentially good; but the effort required to justify the existance of the nonsensical enemies and choice of characters would make it so tiresome that a more organic-made story would prove itself more worth of investment. In games, however, the fact that you have your reliable moveset and the physics of the world remaining consistent helps making the scenarios seem easier to accept. The spinies may not have anything in particular to do with caves or sewers, but he exists the way he does to make it clear to the player that he can't kill him like the koopas, that he can't jump above him. So even if the logic of the situation is off, you still has a connection to the experience, you know the tools you have and you can imagine how to interact with the new surprises. It's an advantage that no other medium has.

With that said, rhythm heaven is my favorite example of the last paragraph's ramble. It's a simple rhythm game that divides itself in stages that are extrapolations of something that is vaguely close to real life scenarios or stories. In one stage you have to kick sports balls away in order for them to not bother your date, in other you are a very, very tired ring fighter covered with sweat, trying to answer the interview with a lady that speaks in a onomatopoeia of a real dialogue, and all of that while trying to keep the rhythm of the song playing. The songs and each individual player input to keep the music going creates a sensation of belonging to the game's stages, even if they are silly or absurd. And the fact that such strong connection can be estabilished regardless of the weirdness of the settings makes the experience unique, and it makes it satisfying in a way that would never work in any other medium.

My favorite example is the samurai minigame in rhythm heaven Fever. Its just a simple silly story; a pair of kids had their toy stole by some shadow/ghose, and the samurai goes to a cave to try to get it back. The player input required is equaly as simple; you just tap A to slash and A+B to slash multiple times(to stop the group movement). And yet, even being this simple and basic, it accomplishes something  the majority of AAA games fail completely: it makes me invested on it. It makes me invested on its illogical, silly experience. The conjunction of the music, aesthetics, player input and personality converge into a memorable experience.

It's not as if something like that connection could only work in that simplistic of conditions. It can be made into more games, and it should. And it should because then we would be getting more experiences that you couldn't get in any other medium. Not butchered, worse versions of movie and book stories, that are pasted together with the most basic and below-average gameplay. We don't need to strive to have experiences that are similar to those mediums to earn respect, we should be getting our new and earnest, unique experiences. That's what i believe and, among other things, want in a videogame.

One of the few Nintendo franchises that I haven't played yet. What's the best entry to start with?

I could agree if it wasn`t for your last paragraph.

Megamix on the 3DS gathers most of the minigames from the entire franchise (with some notable exceptions) plus some new ones. It has some QoL improvements like being able to see how accurate your inputs are and supports both button controls and touchscreen controls. It also has offline multiplayer if ypu are interested. All in all, is the most complete entry. Great for a beginner (despite its silly story. Yes, this entry has a "story", but don't expect much in that regard)

However, I strongly recommend you to check Rhythm Heaven for the NDS and/or Rhythm Heaven Fever for the Wii before you jump on Megamix.  Not only they have some exclusive minigames, but they are much challenging games in general. Megamix is a cake walk to finish because you can beat minigames even if you miss a decent amount of inputs. You have to mess up real bad to lose... And that doesn't feel right. The DS and Wii version are more "fair" in that regard.

Also, the NDS entry in particular has a more original control scheme. On Megamix (3DS) the touch controls are limited to tapping the screen. On the DS however, minigames use different touch mechanics like sliding, which in my opinion feels more varied and fun.

So you want more minigames with simplistic controls without story focus or big presentation?

I'm sure there are a few thousand of them in the AppStores and eShop.

I don't  know why i even bother with this site.

I want games to integrate the interactiveness with its story and settings more. I use the example of a game with simplistic controls, but it doesn't mean i want every game ever to be like this. Way to miss the point genius, learn how to read.

This is a really great read. I think what the original post is trying to get across is the ability to connect stories to gameplay in a way which can both counter-act ludonarrative dissonance, while also making the scenarios still as equally absurd as other games out there which may focus less on establishing a strong connection between the gameplay and the goals of the story. The format of short skits probably allows for more variety than other games in this regard, whilst also not sacrificing the connection that the story has to the gameplay, because each story and gameplay set piece is unique in and of itself. That's much harder to pull of in say, a game like Uncharted, where there is a degree of moral ambiguity in the story, despite Drake slaughtering hundreds of men for hours on end.