No perfect season for the Patriots. Interestingly, 49ers still have a chance, but like the Patriots their opponents have been quite mediocre.

First off, I think the reason for my empty template was something like a cookie or cache reset on my browser because I had to properly log in to Discord during the weekend too.

Secondly, it's good to hear that the Patriots lost, although I had picked them, so it's not all good for me.

Thirdly, the obligatory summary of the Packers game.

It was one of those days where nothing works well together for a team. The Packers got Davante Adams back after injury, but their playbook also seemed to revert to early season where the offense had a hard time to find any rhythm. All those plays that worked well in the previous weeks were apparently not called, or at least not often enough. For the longest time, it was either three and out, or one first down and then punt for the Packers offense. The defense wasn't convincing either, but at least they repeatedly managed to hold the Chargers to field goals to prevent LA from deciding the game early. It was a dominating performance of the Chargers with long drives and the only shortcoming of being unable to score TDs.

The game was only 9-0 at the half and the Packers received the second half kickoff, but after that first drive it became clear that the only chance left to win this game somehow was that the Chargers engaged in the art of losing that has costed them so many games in the last several years. That didn't happen though, instead they finally managed a TD after their special teams had blocked a punt and gave the offense a short field. The Packers had some semblance of offense on the following drive and got on the scoreboard (19-3), but then had to concede another TD. 26-3 in the final quarter inclines teams to switch to prevent defense, so that breathing room allowed Rodgers to go 9 out of 9, including a TD pass and 2PC that he ran in himself. The Packers defense couldn't get a quick stop, so it became miracle territory where two TDs had to be scored in a little over two minutes, including a successful onside kick. Unsurprisingly on this day, the Packers couldn't even get one score and turned over on downs.

It was the kind of game that most commonly occurs in Detroit, because nowhere else has the Packers team collectively faceplanted as often as in Michigan in recent history. It was only fitting that the commentators Nantz and Romo went to the sideline for the start of the second half, commented one drive down there and walked back to their booth. Afterwards the stats update for the day showed 58 yards for the Packers offense compared to 60 yards for Nantz and Romo. Totally a troll job by the broadcasters.

Positive takeaways this week? Only one: The entire NFC North lost, so the gaps in the standings remain exactly the same.

Actually two: I like the Chargers and their highly deserved win means that they still have realistic playoff chances.

Well I did terrible this week due to all the upsets. Still doesn't change my mind on the shitty teams that somehow found way to win.  I'm sure most people in league had rough week so not concerned.  Maybe I need to least go for one or two upsets a week. 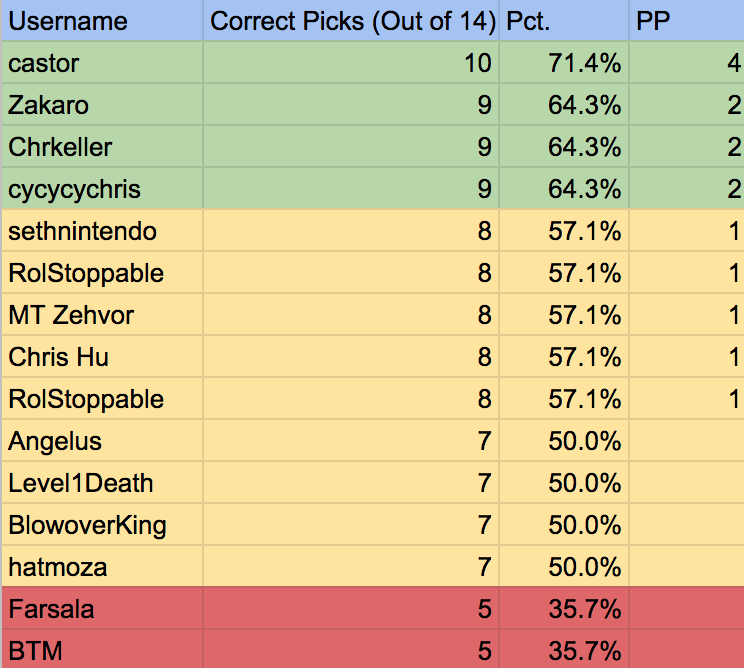 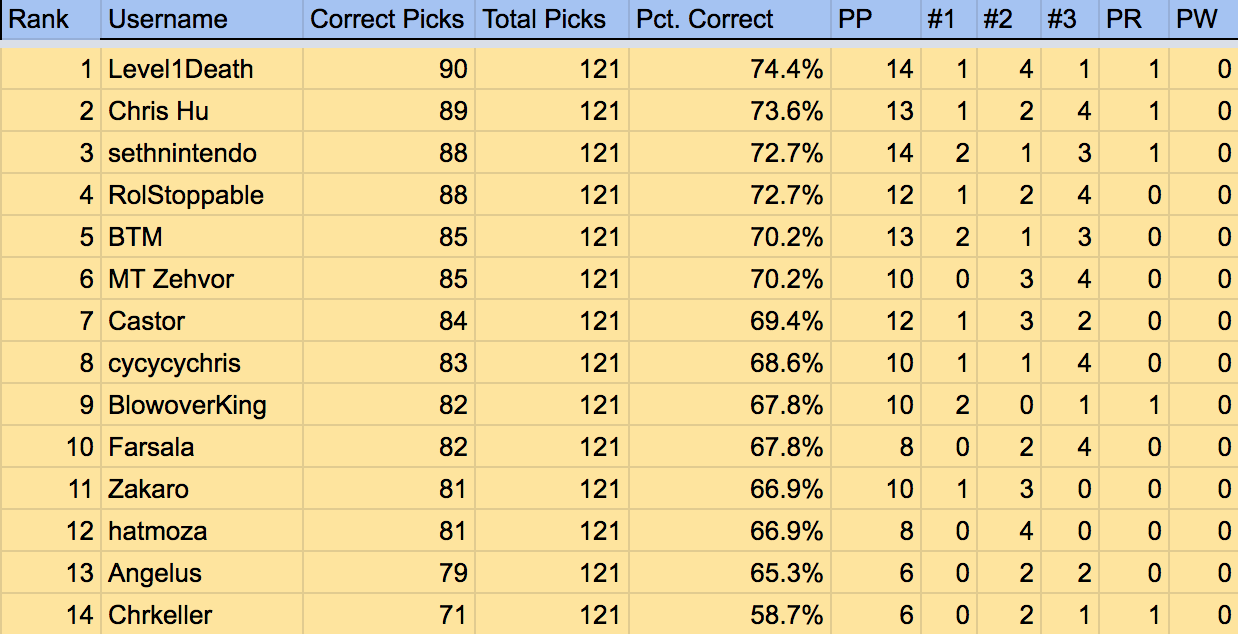 "Can you please upload picks as soon as the last game of the previous is finished? Believe it or not, this is a great inconvenience for me"

No, or at least, not consistently. Unfortunately Tuesday and Wednesdays are usually incredibly busy for me. Both days have classes, and Tuesday has work and then a late Bible study after class, while I TO a Smash tournament on Wednesday evenings. I'm generally not getting home until like 1-2 in the morning, and honestly fuck making spreadsheets at that point.

That being the case, if for whatever reason you can't set an alarm or something for making picks on Thursday mornings, I'm fine with people posting their Thursday game picks here before the spreadsheet goes live. Please don't do this for every game though.

Note to myself: I picked the Browns, Bucs, Lions and Vikings for week 10.

The positive takeaway from a mediocre week 9 is that I gained one pick on the leader anyway. Could have been more if I hadn't trusted the Browns and Jets.

The current win percentages in the standings are unusually high. Mid to high 60s would be normal. But then I remember that the total number of games must have passed 130 by the end of week 9, so it's not the predictors who are performing incredible, it's that the displayed win percentages must be wrong.

As for uploading new templates, why don't you do that on Mondays? I mean at any time on Monday, not only after MNF.

I'm really getting killed by the late voting. Even still, I'm positive something isn't right... and I'm too lazy to investigate whatever mistakes TMZ is making as host.
Also you could literally open up voting for the rest of the weeks right now if you wanted to. I dunno why you insist that you can't open up voting early.
Also also, this website doesn't seem to work with me some days. I literally have to shutdown my macbook or mobile and wish the website doesn't get trapped in an infinite loading screen.

Where is this week's picks?

Found it, hopefully it counts, I got it in before kickoff.

I went back through the results from your past three weeks, and you got 6, 11, and 7 picks correctly, all of which were below the median for that week. Even if you had gotten those TNF picks, you'd still be below, at, and at the median for those weeks. You're correct that something isn't right, and it's your predictions.

I'm fine with opening up stuff early, I'll try and get a few weeks from now put together this weekend. Hadn't thought of that before.

Off to a good start with my picks this week. Phillip Rivers deserves most of the blame for the loss against the Raiders.