Back in 2005 Sony and Santa Monica released one of the biggest and most epic beat em up games of all time with the original God of War.  Since then Sony has released many more in the series including God of War 2, God of War 3, Ghost of Sparta, Chains of Olympus, and multiple God of War collections.  Now Sony and Santa Monica is going to take one last crack at God of War on the PS3 with the much anticipated prequel God of War: Ascension.  Seeing as the series has been dubbed amazing, fantastic, epic, and other words to show praise does this prequel continue God of War’s dominance with great gameplay and graphics?

God of War: Ascension is about Kratos’s tormented mind after the fact that he killed his family from the betrayal of Ares “The God of War.”  At this specific point in time Kratos is a mere mortal but is noticeably just as powerful as he was in every other installment, if not even more powerful at times.  It wouldn’t be a God of War game if Kratos wasn’t seeking some kind of revenge and yes in a way he is doing such things.  Instead of going after the gods though, in this greek mythology Kratos is after “The Furies.”  And while they made for nice opponents in the game they were neither interesting nor mind blowing.  In fact they were rather predictable with their green rings that would set off illusions in Kratos’s mind.  At the same time though, Kratos at least tried to show a more sensitive side to him……..Well kind of.  If that was the attempt I believe they failed at showing more than one emotion in Kratos as in Ascension he is blinded by rage more than anything.  This continues his one sided character of rage and fury (Interesting since he is after “The Furies”).  I’m glad that they tried to show some emotion with him at small parts in the game but at the end of the day he was still angry, let many innocent soldiers die horrifically, and was selfish by only focusing on his own goals. Even though his character continued to be one sided the story it’s self did not really add any depth to his character nor told us things we didn’t really already know.  It touched up on a few things but nothing really ground breaking.  I think the story could have been much better overall but for a God of War nut I could see this being great as well.  Depends on how big of a fan you are of Kratos.

The gameplay is pretty similar to any other God of War with a few new elements thrown in including a time shifting item.  You also can choose from different element blades to change your attacks up a bit.  The thing about this is that God of War III having different weapons entirely resulted in more ways to attack which resulted in better gameplay.  In God of War: Ascension while the elements add different elemental attacks and magic, it also was a step back from having different weapons.  None the less the gameplay was superb at times.  At other times it did nothing but aggravate me by changing the camera angles in awkward positions that would result in me getting lost in my foes or resulting in death.  The entire first 2 hours was filled with bad camera angles.  It does get better but it can be annoying at times. Also the platforming also has problems with the unkown of what to climb since for some odd reason Kratos can grab on to some things but others he just refuses to grab.  Just jump at invisible walls a times is what I ended up doing until I found what to climb. The puzzles in the game can be complicated and had me scratching my head at times but I did enjoy the change in pace of the game at times.  However I was not a huge fan of the time shifting puzzles.  While at times they did well with it, other times it just felt like filler by repairing a broken bridge or stairs.  The thing that aggravated me the most about this game was the increased difficulty.  I played it on normal and I swear it feels like it is on hard.  And no not in a good way.  There was points in this game that I just felt like quitting because the way they throw enemies at you just feels cheap at times.  At one point in the game I had to go against 4 enemies that has invincibility for short periods of time while fire is on one side and shifts while the middle panel falls below you while also having to kill 50 plus enemies.  I did stick with it hoping that would be the most annoying part but within the next hour there was an even tougher part.  When I heard other reviewers complaining about the difficulty and cheap gameplay I didn’t believe it because I’m good at games, so why would it annoy me……..Yeah I was wrong, I got annoyed.  Other than those occasions though the game is actually superb for short sprints in the game.  The consistency is just a little off.

The graphics is absolutely stunning.  It easily goes up to being one of the, if not the best looking console game to date.  Everything from Kratos’s skin, the character designs, the bosses, scenery, and the scale of the game is absolutely stunning.  I honestly have no complaints about the graphics in God of War: Ascension.  It is the best of the best, simple as that.

Overall the game has its moments where it shows glimpses of being great but in the end I found myself being irritated more than actually having fun whether it be because of the hords of enemies that they send at you or the horrible camera angles.  The graphics is stunning and at times it really does have great moments, I just wish they had more of them.  I feel that God of War: Ascension not only was a step back in the past for Kratos but also a step back for God of War.  I think if you want a stunning game or you are a huge God of War fan then definitely get this title but I wouldn’t recommend it to anybody new to the series.

Also I want to apologize for not reviewing multiplayer. It was a rented game from gamefly and it requires an online pass to play.

7.5 for the story seems a bit generous.

Good game though. Definitely the most fun I ever had with GoW campaign.

Story 6.0
Gameplay 9.0 (beat it on Titan, no patch)
Graphics 9.0 (by current PS3 standards)
Content/value: 8.5 Just for the campaign. It's cool to replay using other weapons you didn't use as much in the 1st playthrough (first time we're able to do this in a GOW game since traditionally a couple of weapons you get very far into the game) and Titan mode is a really awesome challenge. That's a good 30-35 hours as single player game. If you really get hooked on the MP mode (which I didn't care about), it could go higher.

I would give the gameplay a higher score personally. I don't remember a section that got me annoyed (in normal). The combat was the most fluid to date, and I felt like the elements added quite a bit to it, as well as the new moves.

I havent played it much because i have GoW3 arriving on the mail soon, but what i played i loved. Really amazing game. I wasnt disappointed at all despite the lukewarm reception. If you enjoyed the other games, you will enjoy ascencion. 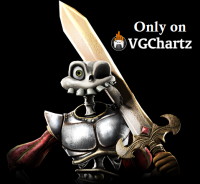 But seriously though, nice review! It pretty much sums up how I feel about the game.