This is the vita version I reviewed. This was Sony’s first attempt to bring PlayStation icons in one game but is it good? Well here is my Unbiased Review of PlayStation All-Stars Battle Royale:

Well first off each character has a story, sort of. Each character begins differently and ends differently but practically everything else is the same except different opponents so it will get a repetitive after five characters because you will just see the same song & dance and you will get bored. There is a fair selection of characters to choose from but I wish there was more first party characters. Having third party characters of this gen did not make the PlayStation brand what it is today. Characters like New Dante, Big Daddy, & Raiden shouldn’t be in it. They could have chosen more PS1/2 Era characters which practically made the PlayStation brand popular. The good choices was Toro, Spike, Sir Daniel, Jak & Daxter, Kratos, Parappa, Sly, Sweet Tooth, & Ratchet & Clank because they had a big impact in the past. They need more characters that had a big role on the PlayStation, the ones that made a difference. I will leave it at that because there are other things needed to be talked about but on another note, there shouldn’t be two Cole’s. The taunts you do with each character felt natural from their rightful game. I had a tough time trying to finish the entire character roster story because of its repetitiveness. I did complete them all but I had to find ways to convince myself to complete them. Like I said before, it is good for the first five characters but after that it will probably be tough to complete it. The final boss in this game was too easy. It didn’t need much effort to defeat him. The story for each character is short and a bit boring. I don’t know if it’s a positive or negative thing because of it being repetitive it is good but you can get through it rather quickly which is a negative so this is a neutral thing. For the last thing I should bring up is that each character has its own skillset so it is enjoyable to try to find out what those are. It will take quite a lot of time to use every move possible but you may not want to try to master them all.Overall it was kind of bad because most of these characters were practically advertisements of upcoming games and I wish Sony didn’t do that. They had an opportunity to put all these characters that made the PlayStation brand popular and they squandered it like hitting a fly with a flyswatter (the game is the fly and Sony used the flyswatter to kill it).

Let’s start things out with trials. It adds to gameplay and it also feels like a tutorial but challenges you at the same time. What better way to try to find out how to do every move with a challenge. It is a good way to teach yourself the moves this way because people online or offline arcade won’t stand around letting you hit them so getting taught the moves while they are trying to beat you would prepare you for the other stuff, but now onto other things like unlockables. Yes I enjoy unlockables because it adds replayability especially if you like unlocking things like me. Each character has different unlockables so if you want all of them it will take quite a lot of your time. It is pretty easy to learn the controls. It takes only three minutes or less to know the control which is pretty fast. I spent so little time trying to learn the controls because I practically learned it in my first match but I wish I could control the camera because it zooms out to far and I lose track where my character is. It gets annoying really, especially when I play online when many others may play the same character as me so I can lose track of who’s who and tend to get beaten because of it. This is a flaw that I don’t like but I still like how easy to understand the control is. The customizations are cool to do like change outfits or the pose or the voice and others. I like it myself because it’s fun to customize stuff. Leveling up the character is fun to do and the levels get carried over from offline play to online play and from online play to offline play which is good because you won’t have to start from scratch. Trying to get goals can get hard to get but you may wonder what goals are. Well goals are like challenges in COD, do something special and get XP for it. Goals are just like that. I like AP points to get finishers especially since they can’t stand around for a finisher ball to pop out. They actually have to do something to get it and to get AP points; you have to damage other players. The weapons that pop out of nowhere to use against your opponents is cool but nothing special. It damages them and you can steal some AP points with certain weapons which would be a time to use that type of weapon on someone that has the most AP points (just a tip). What I have a problem with is that hardest difficulty (All-Stars) isn’t really that hard. I can still beat them just as easily as I was on the easiest difficulty. No challenge whatsoever and to me that is a shocker because I was expecting it to be a challenge like anyone else would on the hardest difficulty. The other problem is that some of the characters feel unbalanced. Like a move that should have done a lot of damage (AP points) only gives you little amounts of the stuff.Overall they did a great job with the gameplay

The intro was great mainly because of the song and how they did the intro with the song. It works together which is good. The menu layout is simple and easy to get to everything so no confusion. The menu background is ok but it changes every time you re-enter the main menu which makes it interesting. The music is good and seems to be enjoyable but not great but it is good as it is. The stage designs are good. I mainly liked when buzz trivia comes in the background and you would have to answer the quiz while in the middle of battle. The stage’s changes so you have to adjust to it (not much of a change but enough to watch where you are going on a stage). The stage background is good and they look identical to the game that it belongs to which they did a great job. The number one thing I like the most is that there are no framerate issues and that is good but there is mini glitches but not big ones and is not game breaking in any way. What I don’t like is the long loading times. Yes I can myself a glass of soda and would still be loading. It is a medium problem though.Overall for a handheld they did a great job. I got a near home console experience (meaning it almost looks identical to the PS3 version in every way) and they deserve props for a job well done for making it so close to the PS3 version on a handheld console.

This game is solid and it impressed me because I wasn’t expecting it to be solid. I just viewed it as a wannabe of another game (you know it) but I was wrong and it can co-exist together but on separate consoles (of course). It is not better and I can agree to that but this game is fun in its own way and I like that. It is a good party fighter (to me party fighter means everyone can play it and have fun) which is fun for a family to just sit down and enjoy. Superbot executed this genre pretty well but there needed to be more stages but well executed regardless. To be honest I don’t really like fighters but this game to me brings some fun to the genre like that other game (yeah you know it).Overall they did a pretty swell job and that is good because I hate seeing games that are trying to be in a certain genre and fail at it. Well this game doesn’t fail in the genre it was aiming for.

Having Cross Platform Play is good. If you don’t what that is, Cross Platform Play is when PS Vita & PS3 can fight against each other. It’s fun and an enjoyable experience (except when you meet a sore loser) but it is still enjoyable. The Multiplayer is Replayable when you don’t feel the want to complete the characters stories. I suggest do as much of character stories that you can and when you get bored go to multiplayer for a break. There is no lag once you are connected which amazes me because the fighting/wrestling games I played (Mortal Kombat, Soul Caliber IV, WWE 12) always lagged online on me but for the first time a fighting game I played that never lags on me. You can chat with PS3 with the PS Vita (in game of course) which is cool because I can play it at a hotel and can still talk to my friends while playing the game. The problems I found are that it takes a long time to connect to a match. It sometimes takes me one minute and sometimes three minutes which gets annoying waiting there for it to connect when you can do something else. Sometimes if it hits an internet glitch it will freeze the game and have to exit the game and reset it. It happened to me twice. Once you find a match it will take a while to load it which 30 seconds to one minute and that gets annoying also. There is no voting on which stage you would go on. It will automatically choose for you which I hate because I want to vote on it. Disconnects you from the match after you finished it to me is bad because I may have liked to play against that group but it will automatically disconnect once the match is finished.Conclusion:The game is enjoyable to everyone and probably a lot of Sony fans will like it. If you are on edge about it than you should rent it and see if you like it or not, 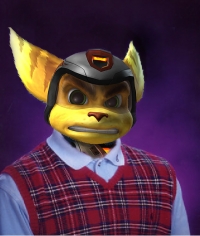 Fair. I feel it could've been better if they put more... love, and passion into it.

Having logged ~10 hours on this game I think you're being a little generous with your score there. Dull would be the word I'd use to describe it.

Why do you have +Short and -Short for characters o.o? What does that mean?

Well besides the fact, even for a crossover fighter it wasn't executed well.

I play this game a lot in multiplayer and I'm sorry Hawkeyejonjon but your review felt very short on the multiplayer component, you should have play it more online before doing a review.

That doesn't even...basically, it can't win either way. What kind of logic is that?  Seriously, pick one.