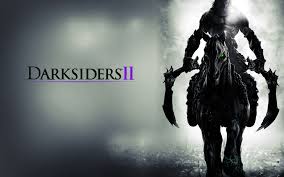 In 2010, Vigil games brought us the sleeper hit Darksiders, which went on to sell over 1 million units worldwide and set the stage for what could be an epic franchise and a major player in the action/adventure genre, dominated by such luminaries as The Legend of Zelda, God of War, and Assassins Creed. This year brought us the much anticipated “sequel” for Xbox360/PS3/PC and eventually WiiU. Does it bring the franchise higher up in the pantheon of action/adventure or down to the depths of forgotten franchise hell? Let's find out!

Darksiders 2 is a parallel story to the first game in the series, not a direct sequel. The story takes place, give or take, at the same time the events of Darksiders transpire. In Darksiders 2, you play as Death of the Four Horsemen, brother of the originals protagonist War. Death sets off to prove that War is innocent of the crime he is said to have committed and is early on launched into a world where he believes he can do the only thing that will clear his brothers name, revive humanity which has been wiped out.

The story in Darksiders 2, while robust and epic on the outside, quickly devolves into what seems like a string of side stories and fetch quests, that often stray increasingly far from the main narrative. Many characters along Death's path seem to have only a sliver of bearing to the main story and often request you go even farther of the beaten path before they point you in the right direction. Overall, the story, especially in the middle of the game, is thread-bear and not too intriguing, which is a shame due to what I feel it's predecessor did so well. Darksiders was, at it's core, a mystery and it's linearity, while limiting the scope of the game, kept the story always moving and always on a path to resolution. Darksiders 2 seems rambling and too spread out for it's own good.

However, one saving grace for the story is some truly inspired characters and voice acting. Death is an incredibly likeable fellow, for being the grim reaper, and his voice acting (Michael Wincott) is superb. The gravely voiced constructs, the Scot-like Makers, and the Dead Lords and Nephalim that fill the world are all wonderfully fleshed out in story and design and do a great job of making the world seem alive with history, even if it's all a little nutty .

Darksiders 2 excels or fails in gameplay based entirely on how you feel about the myriad games it is obviously inspired by. While the first game was often labeled a “Zelda” game, Darksiders 2 more closely resembles God of War or the modern Prince of Persia series, with it's focus on quick dodging focused combat and parkour wall running, ledge leaping, trap laden dungeons. Throw in a dash of RPG's such as Diablo, with a heavy focus on gear and loot. The concoction works extremely well for the most part. Combat is fun, fluid, and instantly intuitive to any veteran of the action adventure genre. A main weapon (Death's infamous Scythe's) and swappable secondary weapons, ranging from huge axes to quick arm-blades, mean combos and slick kills abound and keep fighting the same enemies over and over, fairly fun and exciting. The Dungeons focus mainly on transversal and how to simply get from one place to another using a combination of switch puzzles and environment based parkour. Finally, the above mention loot system does a nice job of letting you know what gear will work best for you, by simply telling you, before you even pick it off the ground, which stats it raises and lowers and how it'll affect you, taking out much of the guess work. There is still however a bit too much item management for my taste.

Where gameplay falters is in the size and scope of the world, as well as the tasks performed. One of the first area's you encounter is the vast Stonefather's Vale, complete with giant demon eye spike wall blocking a gate. What you don't encounter in Stonefather's Vale is much else. Enemies are few and far between on the overworld and have little to no aggression until you are already halfway through their spines with a giant blade. I normally play games on “Normal” settings the first time around, but found the enemies such pushover, I early on turned the game to “Apocalyptic” difficulty, and still found myself dispatching most enemies with ease. This unfortunately repeats through most of the game, with plenty of places to go and look at, but not much to do. Size for size sake in the world map does the game a disservice in my book.

The last big complaint you will find with the game is the fairly consistent bugs through-out your adventure. Falling into a never ending void or button commands simply not working when pressed doesn't happen all the time, but often enough for it to be a very real issue. I'm playing the WiiU version, which had plenty of time to patch out these issues that I know where present in the PS3/360 versions, but unfortunately were not.

Graphically Darksiders 2 is mediocre to good. Nothing stunning, but nothing too terrible or rough. It's what you would expect from a slightly below AAA title on the HD consoles. It does, however, have a terrific and unique art-style which manages to be “dark” in tone while still vibrant with color and dynamic lighting and effects. The music isn't much to write home about, so I won't (though I will say, I’m pretty sure the music in the dungeon Phariseer's Tomb is straight out of Resident Evil: Darkside Chronicles, which is a good or bad thing, depending).

Finally, a quick touch on the WiiU specific features. The WiiU gamepad, during normal play, displays both your inventory, complete with simple touch commands for checking and equipping gear, as well as a nice map, swappable by a quick touch of Death's pretty face in the corner. Off screen play on the tablet only is also available and works very well, with no noticeable frame rate issues, but certainly a bit of a drop in quality of the lighting and atmospheric effects. Off screen play simply relegates your inventory and map to pause menu as in the other versions of the game. The WiiU version also comes with the DLC available for the other versions already installed which is a nice bonus for the extra money you will spend on this version.

While the above review may paint a “grim” picture about Darksiders 2, I cannot stress enough just how much FUN the game is to play. When things are happening, whether combat, dungeon exploring, or cut scene, I always find myself smiling and enjoying the fluid controls and nice presentation. It's more that the sum of it's parts do not add up to the epic game I was expecting, and certainly does not live up to the multitude of iconic games it cribs from, including it's own predecessor. At 30+ hours it's a meaty experience with plenty of fun to be had, if you are willing to put up with some bugs and slightly barren, though beautiful world(s).

Great review man :) I have yet to buy this game but it may go on sell on steam so I may pick it up

i plan on trying it for wii u

The entire Darksiders franchise was on sale on Amazon a few days ago for $13.5 (Steam codes)! And it has gone around twice on sale the last few days on Steam

Game would be so good without the fucking screen tearing....

I completely agree with your review, except the score, I really didn't enjoy the game, I had to force myself to finish it at the end, so it would have been a 6/10. The middle half of the game is insanely boring, I don't know what the developers thought :/

I was kinda surprised by my own  score actually . I tried to score each category on its own merits and then simply did the math . It was 7.125 which I Rounded down . I agree with you that the middle slog is brutally boring at times, but the first and last parts are very fun . I think a 7/10 is fair .

I just didn't enjoy darksiders 1 enough to even consider buying number 2, maybe when its free on ps+ ill give it a try seen as thats how I stumbled across the first one.