L7 is a cousin/sibling of Hole and Babes in Toyland. The group Sugar Babydoll consisted of Courtney Love (Hole), Kat Bjelland (Babes in Toyland), and Jennifer Finch (L7).

I got Cardigans wrong (seems they're still popular), so I might be wrong with this one, since I don't think many Americans were familiar with alternative outside of Mazzy Star and Smashing Pumpkins, as alternative music didn't really get big in the US until Nirvana in 91. Shoegaze/Dream pop emerged in the 80s and had a giant influence on 90s alternative. Dream pop itself emerged in the post-punk movement, and was brought to the mainstream by bands like Cocteau Twins and Siouxsie and the Banshees. My Bloody Valentine also exists in the world of Final Fantasy 7 - in the upper left you can see a poster for My Bloody Valentine and their 91 album Loveless. 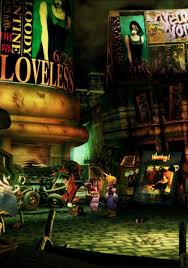